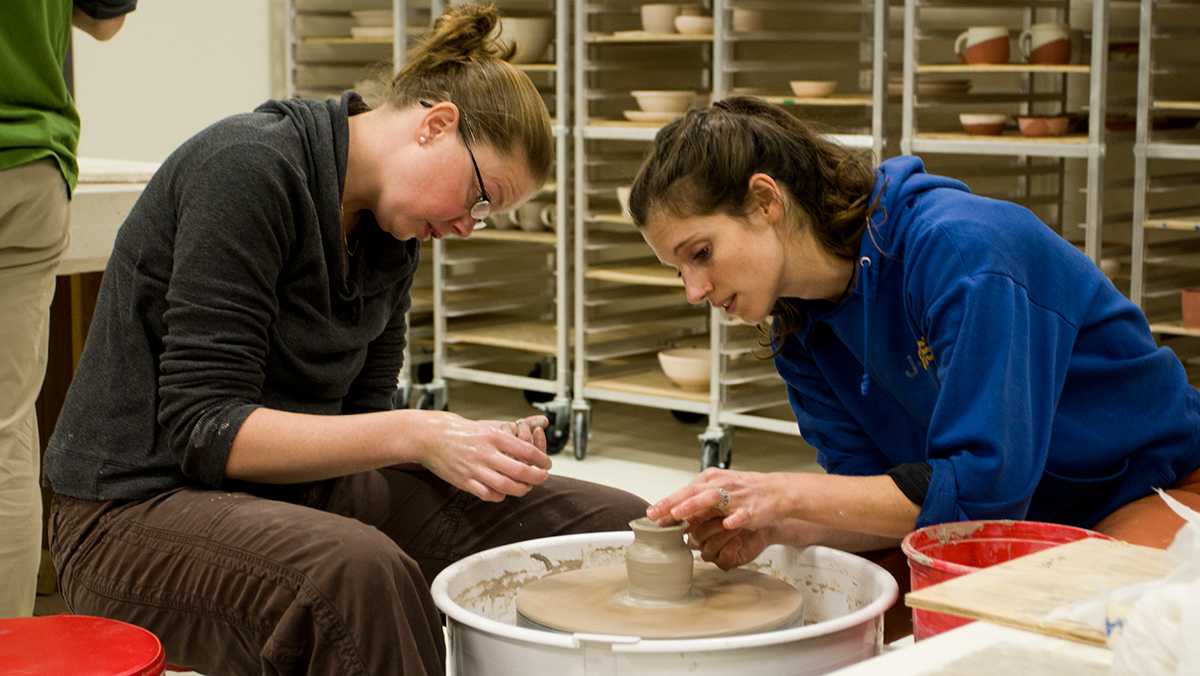 Students smell the clay even before opening the door. Occupied pottery wheels are neatly lined up in the middle of the room. Students’ sculpting supplies and unfinished craftwork stacked on the studio’s shelves promise completion upon their owners’ next visit. Both the scent of clay and the essence of creativity hang heavy in the air. For Julia Dean, founder and owner of The Clay School, this is her sanctuary.

The Clay School, located at the South Hill Business Campus on Danby Road across the street from Ithaca College, is a community ceramics studio that has been bringing those interested in clay-making together since its opening in September 2015. Sculpting the clay by hand or using pottery wheels, students and professionals working at The Clay School create all sorts of pottery, including pots, plates, cups, bowls and other useable or decorative crafts. Dean said opening this studio has fulfilled a need in the Ithaca community and created a sense of belonging among potters.

Stemming from a long line of craftsmen, Dean has been fascinated by clay creation since she was 10 years old. However, college was the first time she ever took a pottery class.

“I was an education major and taught public school for many years,” Dean said. “I took my first clay class in college and was completely hooked. Everywhere I lived after that, I found a way to work with clay.”

Dean said she was inspired to pursue clay-making on a larger scale, which is when she formulated the idea for The Clay School. She began teaching ceramic classes in 1999, which later developed into a full career for her. Dean’s studio used to be run out of her house on a smaller scale, but as demand for classes and production grew, Dean said more space became necessary. Dean said The Clay School now gives her the opportunity to combine her passions for teaching and creating.

In 2011, Cornell Ceramics Studio closed its doors to the public. Dean said this was Ithaca’s main outlet to create pottery, and its closing was a huge loss to the ceramics community.

“There was a big need in the community for a space to work,” Dean said. “Pottery is a pretty expensive hobby, so it’s not easy to just set up your own thing in an extra room. Cornell Ceramics Studio was a community studio that serviced about 200 students across the community. When they took that away, there really hasn’t been anything else.”

Observing this void in the community and understanding the importance of this sort of space, Dean took it upon herself to right the situation. She said the process for opening The Clay School was long. She took a business course, sought out the ideal school location, collected money and equipment, and settled into the South Hill Business Campus in mid-July. Dean said the community reaction to The Clay School has been more than she had hoped for.

“A lot of people who were involved in the clay community and were looking for something like this — they were so excited that somebody was finally doing this,” Dean said. “Since our opening, we’ve had our classes pretty full. People keep finding out about us. Support has been really phenomenal, and we couldn’t be happier.”

While The Clay School officially moved into the current studio in July, it opened its doors for classes in September. The school currently offers seven classes for varying ages and skill levels. Tuition ranges from $49 for one–night workshops to $399 for seven–week upper–level classes. Tuition to the school grants access to the studio and equipment anytime it is available. Some customers rent shelf space and come to the school to practice and create on their own without instruction. Others come for The Clay School’s seven-week class sessions. The Clay School is open seven days a week for open studio hours, open to anyone participating in the program. 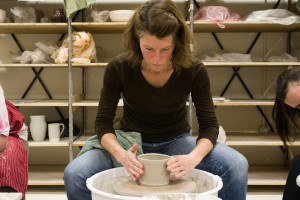 The finished studio now functions as both a space for teaching and practicing as well as Dean’s own professional production studio, where she manufactures her wares to sell to local pottery vendors and retail locations. With both clay instruction and professional creation, The Clay School is constantly occupied and bursting with creativity. Dean said she likes that she can now maintain a presence over both sides of the business with this expanded space.

Like Dean, many other Ithaca residents are passionate about the craft. Martha Gioumousis, an Ithaca resident and a student at The Clay School, has been working with clay off and on for most of her life. While she said she may never become a professional potter, she loves making pottery and being creative with clay. Gioumousis said she began renting space at the school in November and goes into the studio up to two days a week to work on her projects. Gioumousis said Dean has given The Clay School a welcoming atmosphere, which is something the ceramics community really needed.

“It’s a community pottery studio,” Gioumousis said. “It’s really welcoming to people of all levels and ages. It’s filling a gap that we’ve had since the studio at Cornell closed, and Julia made it happen. I think a lot of us are just thrilled.”

Last semester, the college’s public relations lab capstone course worked with six local businesses, one of those being The Clay School. Carly Garone, Allison Kubit, Marisa Nizzi and Alisa Popple, four senior integrated marketing and communications majors from the college, were assigned to help Dean start up her business. The team assisted The Clay School with social media, customer outreach, special programing and suggestions for the future of the business.

Kubit said because The Clay School appeals to a wide market of customers, she expects Dean’s business will experience a great deal of success in Ithaca.

“I think it’s geared towards kids and also adults,” Kubit said. “It’s two very different markets that are both really present in Ithaca, so I think it’s already going to do really well and is doing well already.”

Although the team’s involvement officially ended when the fall semester did, Nizzi said they are still happy to help Dean and The Clay School when they can.

“We still want to help her get The Clay School out there because we really do think it’s a really good thing that Julia brought to the community, and we really want her to be successful with it,” Nizzi said. “People in this community tend to be very artistic and are looking for new and different things to do, especially in these winter months where they can’t do more outdoor exploration.”

The women said they have high hopes for the future success of The Clay School. Part of this, they said, is due to Dean’s ability to make the studio feel inclusive and welcoming.

Dean said she tries to make The Clay School feel like a community. Workers and volunteers from all over the Ithaca community, including some from Longview and the college, gather at the studio to work and share the craft.

“I’m really passionate about what this does for people: creating a sense of community as well as mastering craft skill,” Dean said. “It’s not just about the making part, although that is fun. When two people sit down next to each other at the wheel like that who may have never met, there’s something different about the dynamic in here. People can come together from all different places to learn. That’s the exciting part.”

To Gioumousis, The Clay School is more than just a studio. It’s community surrounded by support, creativity and communal appreciation of the craft.

“There’s lots of creativity and excitement, and it’s a really great place to work,” Gioumousis said. “It’s a place to learn, to grow and to be creative.”