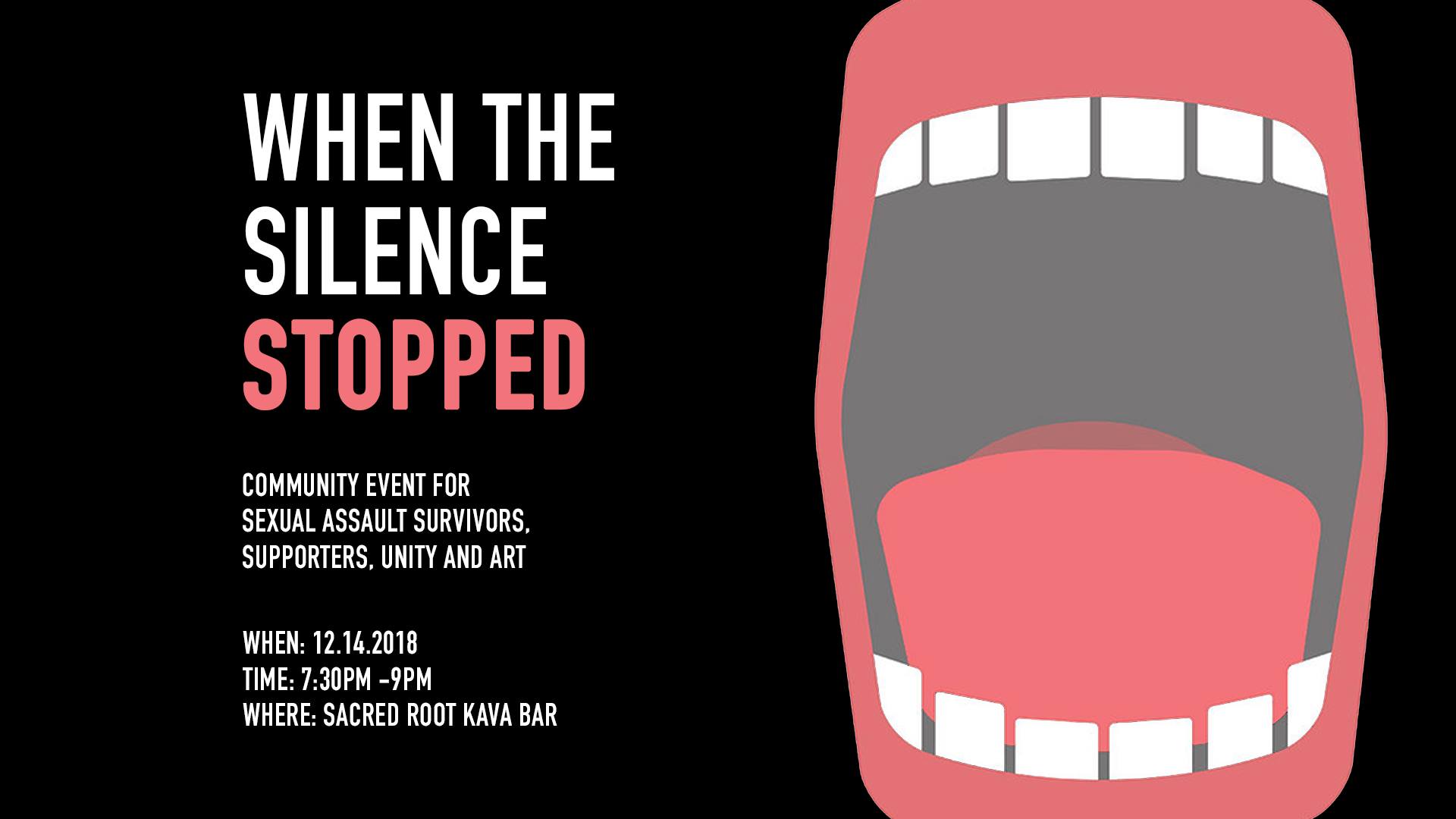 Courtesy of Facebook
“When the Silence Stopped” will include interpretive performances by Ithaca College students. The acts will not necessarily explicitly address sexual assault, but are aimed to uplift survivors and supporters.
By Harley McKenzie
Published: December 11, 2018

Ithaca College junior Usman Ishaq and senior Ezgi Irmakkesen will use their bodies and rhythm to encourage dialogue among survivors of sexual assault.

Ishaq and Irmakkesen are two dancers who signed up to perform at When the Silence Stopped, an event organized by students at the college to honor survivors of sexual assault. It is designed to be an artistic showcase, giving artists a platform to communicate and empower. It will take place 7:30 p.m. Dec. 14 at the Sacred Root Kava Lounge & Tea Bar in downtown Ithaca. Seniors Cal Yohannan, Kylee Roberts, Sara Gutierrez, Jacob Stuckelman and Alisar Awwad are hosting the event.

Gutierrez, who created the event, said she wanted to inspire dialogue and open communication regarding sexual assault the day after the Brett Kavanaugh hearings ended. After Kavanaugh was nominated to the Supreme Court, Christine Blasey Ford came forward with sexual assault allegations against him. After intense testimonies from both parties before the Senate Judiciary Committee, Kavanaugh was still confirmed for the position. Gutierrez said she was in a state of fear, anger and exhaustion following the case because she had seen survivors silenced throughout history and in her own personal experiences.

“I was thinking, ‘I go to a campus that has so many great resources to put on an event in honor of survivors,’” Gutierrez said. “I wanted something positive out of everything that’s been going on. At that moment, I knew I wasn’t the only one who felt this way. I was past exhaustion, anger and sadness. It was a feeling of determination.”

The nature of each piece featured at the showcase will be up to the artist. The art itself will, for the most part, not directly reference sexual assault. Ishaq said he and Irmakkesen are choreographing a piece to symbolize the way that people rely on one another, advocating for building relationships and support systems.

“Ezgi and I have been playing with imagery with partnering and how one individual can build another one up — sort of the fluidity within that,” Ishaq said. “We’re doing a lot of lifts and things that are transferred on both ends.”

Gutierrez said she asked the artists involved with the event to present anything that makes them feel proud and empowered rather than to specifically share their personal stories with the audience.

“I wanted the art pieces that will be happening at the event not to necessarily be about sexual assault,” Gutierrez said. “Nothing is going to be about sexual assault because we aren’t there to out anyone of their stories. We want people to leave feeling empowered and uplifted. All that I’ve asked of the artists is to perform something that makes them feel empowered.”

Ishaq said the inexplicit messaging will encourage attendees to experience the showcase with their own interpretations, allowing the audience to apply it to their own lives.

“Rather than having very specific narratives, it allows people to feel what they need,” Ishaq said. “It can be more of a personal experience for each audience member. We’re talking about the power within and bringing that out.”

Paul Galgoczy, owner of Sacred Root Kava Lounge & Tea Bar, said Gutierrez contacted him about hosting the event at his establishment. He said he was happy to support the message because he feels Sacred Root’s values align with the cause.

“It’s a very important message related to sexual abuse,” Galgoczy said. “We’re very much in support of the #MeToo movement. So much around these issues has been silent for years. People are afraid to come forward because they’re not believed, because they’re going to be shamed. People are not able to heal from abuse they suffer when they’re in that situation.”

Galgoczy said he expects this event to serve as a judgment-free zone for people to come together and be open with one another.

“It’s important, culturally, for us to promote that,” Galgoczy said. “To create a safe space for people to share and not judge them, not make them feel guilty. To help move them through that sort of healing. The more we bring those issues to light, the more it becomes something that moves toward change in our culture. That’s how we make important changes.”

Gutierrez said she has worked to make sure that this event is inclusive and welcoming to all survivors and all who wish to share their support. She said she understands that sexual assault can happen to anyone, so it’s important to her that people of all backgrounds know that they’re being heard.

“It was really important to make it clear that this is a gender-fluid event,” Gutierrez said. “Survivors are all shapes, forms, all individuals, no matter what your sexual orientation, cultural background is, et cetera. I think it’s important to honor and stand with everyone. It’s such a broad thing. It happens every day, all the time, to so many different people.”

Ishaq said he is happy to support people’s coming together as well as a push toward dialogue regarding sexual assault. He said he thinks it’s necessary for people who have experienced sexual assault to be around forms of empowerment that don’t explore the negativity of trauma and the events that may have occurred.

“While we have to take time to acknowledge it, we can make good conversation amongst us about moving forward,” Ishaq said. “Make it about us as individuals rather than the events that have happened to us. I’m excited to have a space like that. I’m really proud of Sara Gutierrez, and I’m happy to be a part of the greater good that’ll come out of the piece.”