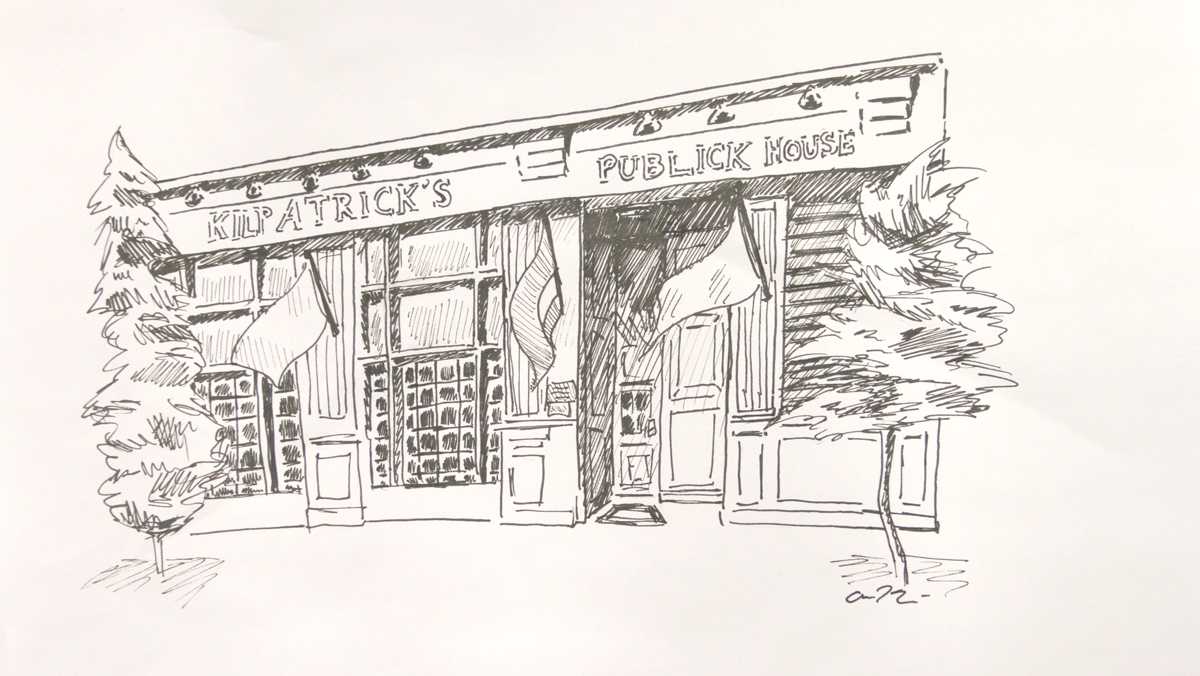 * Editor’s Note: The Ithacan‘s journalistic coverage of the campus often focuses on formal announcements and events. In doing so, we overlook some of the aspects of college that students will remember most. This “snapshot” is the first in a series of narrative accounts highlighting the student experience in Ithaca.

The walls of Kilpatrick’s are vibrating, as a mess of college students and young adults crowds every inch of hardwood floor from the bar to the stage, sheltered from the constant sheets of wintry rain outside. The air thickens with humidity as more people squeeze into the already-packed bar, with fragments of conversation melding together into a raucous symphony that defies the looming winter storm.

But, rising above the chatting and the yelling and the screaming, the voices of two women brazenly belt out Aretha Franklin’s “R.E.S.P.E.C.T.” Their off-pitch screeching into the plush microphones sounds nothing like Franklin’s soulful gospel vocals, but they don’t care. This is their concert, their two minutes and twenty-nine seconds of college-bar fame. 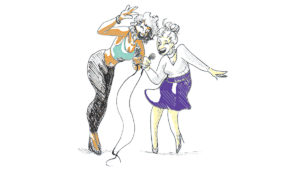 The crowd below does not seem to mind this group’s blatant inability to cover Aretha Franklin’s hit (aside from one glasses-wearing man in a Christmas-red penguin sweater who says he doesn’t like this song). Nope, they’re grooving and bobbing their heads in appreciation, their hands casually clutching clear plastic cups filled with alcoholic concoctions. During each “R-E-S-P-E-C-T, find out what it means to me,” the crowd faithfully fulfills their unspoken duty to sing along with the performers, their voices swelling together in that fleeting yet euphoric karaoke moment when the crowd and the singers singularly turn a packed bar into the world’s drunkest choir.

The end of the song is met with claps and “woohoos,” and the women exit down the stairs, leaving the small stage to await its next performers. The karaoke master, a heavy-set man with a thick mustache who always seems to have the suggestion of a smile on his face, takes charge of the lineup, ensuring that each performance is readily followed by another by announcing who’s up next and who’s on deck with the roller coaster–like intonations of a game show host.

A college guy squeezes his way through the throng and makes it somewhat close to the bar, his gray long sleeve and blue and red puffer vest slightly dampened from the current drizzle. 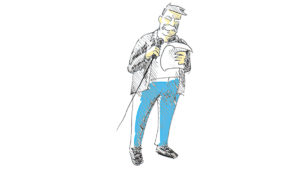 With widened eyes scanning the room, he seems perplexed at this perfect concert of bodies too immersed in the drunken music fest to neither know nor care about the steady rain awaiting them. Or maybe he’s dumbstruck at the gaggle of ladies bunched near the bar holding plastic champagne flutes that sorely stick out amid the sea of plastic cups.

As he collects himself, lines of traffic push past him without so much as a polite “excuse me.” Some eagerly await to enter the mosh pit near the stage, their heads sticking out like giraffes to get a glimpse of the current performers, who, at this moment, are giving their rendition of “Hooked On a Feeling” 110 percent. Others stand on tiptoes to hopefully catch the attention of a bartender for another $3 rum and coke.

And, as a constant, there is that beeline of patrons who rush to the bathrooms as fast as possible, exiting the room during a song they don’t know but rushing so they make it back before the performance ends. They don’t want to miss the next song.

A swell now moves herd-like to the stage upon recognizing the soft opening notes to Neil Diamond’s “Sweet Caroline” over the loudspeakers, their hands tightly clutching their refilled plastic cups to avoid spilling on the hardwood floor.

The college guys carrying this song seem to have no difficulty on the verses as they talk-sing — a quality that can be attributed to Neil Diamond’s low-range crooning — which doesn’t require the same vocal strain as Aretha Franklin. Then, the chorus.

The crowd’s voice booms out once more, drowning out the karaoke singers while at the same time symbolizing their verbal approval of the song choice.

These participants take their jobs as karaoke patrons deathly serious. For without their exuberant half-singing and half-yelling to fill this bar, the performers would be exposed, naked on stage, stripped of the overconfidence that transforms them from mere humans to superstars.

In a moment that defies Neil Diamond’s classic hit, the crowd decides to vocalize the crisp trio of successive trumpet blasts. It’s unclear whether this was a conscious decision or whether they truly believe these are actual words in the song, but it doesn’t matter. Anything goes in karaoke.

What follows is Billy Joel’s “We Didn’t Start the Fire,” a song that mandates the patrons to train their eyes on the television screen in the corner displaying the rapid-fire lyrics that turn from yellow to blue in classic sing-along fashion. But these karaokegoers are unfazed, and they belt out “Birth control, Ho Chi Minh, Richard Nixon back again/Moonshot, Woodstock, Watergate, punk rock,” with an incensed fervor that turns comical when considering that the song’s cultural references predate this generation by about 30 years.

There is, however, at least one girl who seems to know all the words to this song — yes, even the verses. To prove her prowess, she deliberately turns her back to the stage and the screen and recites the lyrics with rote, poetic precision. Her friends stare back at her with eyes of incredulity, now more enamored by her memorization skills than the performers themselves. Impressive.

The college guys are succeeded by a girl with long and wavy brown hair who takes on Bonnie Tyler’s “Total Eclipse of the Heart,” a song that demands complete mastery of voice. She knows this and breezes through the song with the casual confidence of a chef crafting her signature entree. She’s done this before. And although the song is not a duet, the crowd makes it so and takes on the responsibility of singing “Turn around, bright eyes” before brown-haired girl belts out “Every now and then I fall apart.” 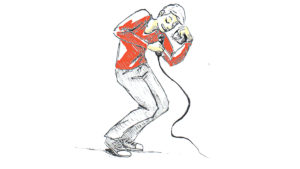 Then, at half past midnight, a break in the drunken din. A man with blonde hair strides onto the stage, a microphone in one hand and a glass half-full in the other.

A few karaoke regulars call him by this stage name, his claim to local fame. The opening chords of Billy Joel’s “Piano Man” begin to play, and loud cheers erupt from the crowd.

Piano Man, so aptly named because this, clearly, is his song, successfully matches every pitch change, from the melodic croon of the verses to the controlled belting of the chorus. The crowd is momentarily snapped out of their karaoke-and-alcohol-induced haze to realize that, wow, this guy is good.

A tall glasses-wearing fan abruptly leaves his front row spot to speed-walk to the bar and then returns with two shot glasses filled with that familiar honeyed hue of whiskey. Piano Man graciously accepts the free alcohol and tips the liquid into his mouth without ever missing a word.

His smooth vocals reverberate around the entire bar, and the crowd scream-sings along, their arms half-raised and their fingers pointed at the star performer. In the Thursday night concert that is karaoke, Piano Man is the headlining act.

“This is all you,” Piano Man instructs to his audience. He holds the microphone out to them as they belt out, “La la la, di da daaa … La la, di da daaaaa da dummmm …”

“SING US A SONG, YOU’RE THE PIANO MAN, sing us a song tonight”  — the crowd takes particular joy in belting these lyrics toward the stage. It’s their turn to serenade Piano Man.

“Well we’re all in the mood for a melody, and you’ve got us feeling alright.”

During the final chorus, Piano Man grabs his phone from his pocket and holds it up, taking a video of the sea of patrons shout-singing and stumble-swaying before him. This is his concert, and these are his groupies.

The performances that follow are less “Piano Man” and more “Sweet Caroline” — inebriated, impassioned renditions of throwback hits that spark the crowd’s adolescent memories — but they don’t seem to care, and they continue to sing along with drunken rambunctiousness, their voices melding together to create a singularly spectacular Thursday night soundtrack.

Weekday routines can blur into a stale monotony. What mark many of our college experiences are the weekends and how we spend them. This is the first in a series of narrative accounts that capture pieces of the social scene in Ithaca. In this snapshot, Senior Writer Erica R.Hendry follows a crowd to 2nd Floor…

Weekday routines can blur into a stale monotony. What mark many of our college experiences are the weekends and how we spend them. This is part of a series of narrative accounts that capture pieces of the social scene in Ithaca. In this snapshot, Senior Writer Byard Duncan gives a play-by-play of three late-night intramural…

A shot in the dark