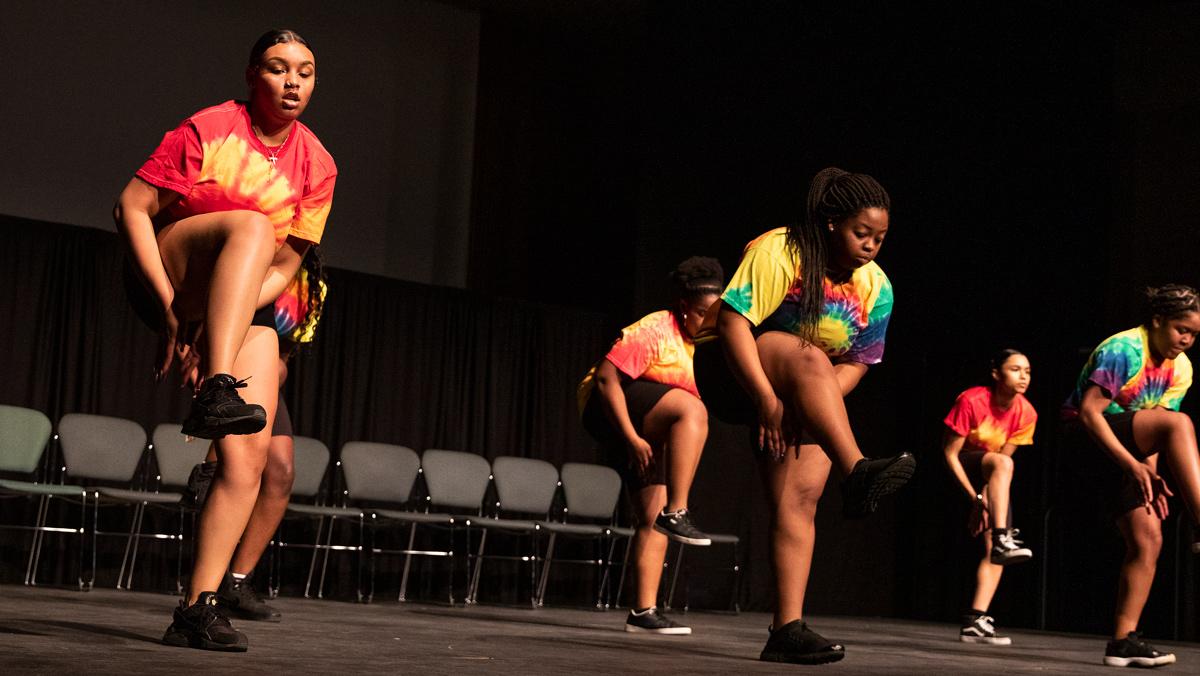 The stage lights fade up as four members of the step team D.O.P.E. Steppers of Ithaca College, stand in a line and begin their routine for the 2016 Step Fest. The dancers, clad in black pants, boots and club T-shirts, start by pounding their feet, clapping their hands and yelling. The performers move in unison and cleanly execute every step, using their bodies as instruments.

The 12 members of D.O.P.E. Steppers rehearse twice a week in preparation for their performances throughout the academic year, including PODER: Latinx Student Association’s banquet Nov. 2 and the One World Concert on Nov. 12. Their annual solo event, Step Fest, is held during Black History Month in February, and they will perform every step they have learned so far during the year in a showcase. Members must audition to be on the team.

“We work really hard to perfect things, and when we finally perform it, it’s nice to see everyone’s effort come together and to be able to hear the progress,” said junior Taury Phelps, D.O.P.E. Steppers captain. “I’ve gotten a lot of feedback that people really like being on the team, and they enjoy the friendly culture that we try to encourage.”

Dedicated, overachieving, precise and entertaining is not only the acronym for the D.O.P.E. Steppers but a reminder to live up to the expectations set for their team and the history of step dancing.

Step dancing was invented by African American slaves as a way to communicate with one another. Stepping resembled African tribal dances and call-and-response folk songs and helped the slaves hold onto their culture during their enslavement. During World War II, even after slavery was abolished in the United States, black veterans incorporated the sounds of military marching into step, leading to an evolution in the style.

As more African American students began attending colleges in greater numbers in the early 1900s, the students created their own Greek organizations to support themselves academically and socially. Step gained much of its popularity when these African American fraternities and sororities performed it at their schools

Phelps said she has been stepping since she was in sixth grade. She said stepping offers her a space to connect to her roots and that she wants other people to have the chance to do the same. She also said she hopes the group creates an environment where people support each other fully. Phelps said that many of the steps are passed down through the club from previous years and members.

“I take a lot of pride in [step],” Phelps said. “Being able to embrace my culture in that way, being able to share it, being involved in something healthy and physically active with people of the African American community.”

Sophomore Kianna Robinson, secretary of the group, said one of the most important reasons for having a group like D.O.P.E. Steppers on campus is because it gives members the opportunity to be around other people of color. She said it helps the students involved feel more comfortable on campus.

“Personally, when I joined I didn’t know a lot of people, but joining a POC club like the D.O.P.E. Steppers allowed me to create a group of friends and build a little family,” Robinson said. “That’s the best part, creating relationships with people. It’s a great way to meet people and socialize.”

Robinson said that because the college is a predominantly white institution (PWI), the presence of people of color and spaces for people of color on campus tend to get overlooked by the majority of the student body. In Fall 2019, only 5.7% of students at the college are black or African American, and 9.3% are Hispanic or Latino, while 72.6% are white.

“When we get new members, I have the opportunity to help others feel comfortable and learn steps if they want to try something new,” Robinson said. “It helps a lot of people find themselves. … It’s not about knowing how to step or having experience — it’s really about having fun.”

Sophomore Absa Beye, D.O.P.E. Steppers performer, said that although the group is dedicated to its craft and puts a lot of practice into its performances, the community of D.O.P.E. Steppers and the recognition the performers get is still minimal.

“Not a lot of people know about it on campus,” Beye said. “Some people don’t know what stepping is, so it’s not well known in the community. Our goal as steppers is to make D.O.P.E. Steppers known.”