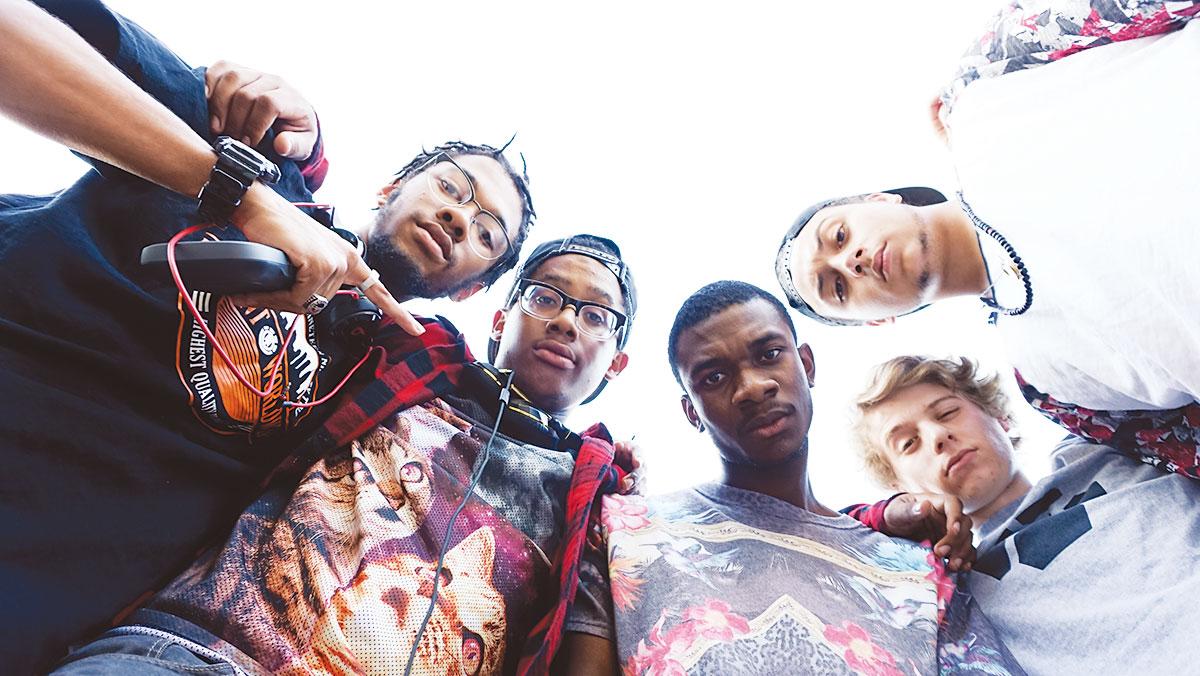 Every Friday at 5:30 p.m. in front of the Ithaca College Library, a small group of students convenes. They stand in a loose circle, set a beat with nodding heads and tapping feet, then start to rap:

“Now I’m bout to go underground with this shovel

These students are just a few of many at the college who contribute to the campus’s hip-hop culture. Hip-hop has long existed as a form of political protest against racial injustice, expressed through rap music, dance, fashion and especially street art. Over the years, hip-hop has worked its way up from the street. It’s been criminalized, marginalized, worshipped and appropriated. Now, the genre has come full circle, once again expressing the discontent of a generation. Recent police brutality issues and social activist movements such as #BlackLivesMatter have caused certain hip-hop artists to show support through their work. For example, hip-hop artist Talib Kweli, who performed in Ithaca on Sept. 3, writes and speaks about social activism and social justice through his music.

On campus, some students use hip-hop to bring attention to relevant issues in addition to giving themselves a voice. Freshman Damian Maravola, who prefers the last name Malvasio, has been writing his own raps since he was 12 years old.

Freshman Ben Kaplan has been a fan of rap since he was first introduced to Eminem’s music at a young age, which then led to artists like Dr. Dre and Snoop Dogg. He said the political messages artists have been incorporating into their work has had a definite impact on these social movements.

“2014 and 2015 have been two really big years for hip-hop,” Kaplan said. “In terms of the amount of great albums being released as well as the social scene and the political scene going on in the world, it’s being heavily reflected in their music.

Junior Dillon Randolph saw Kweli when he performed in Ithaca and said the performance inspired him to produce his most recent song, “Liberation.” Randolph uploads his work on SoundCloud, a website where musicians can share their songs with an online community.

“I’ve met so many people through SoundCloud, through YouTube, through Facebook,” Randolph said. “Also there’s a lot of great music on SoundCloud in general. I can listen to beats for hours, not even writing but just zoning out.”

Randolph said both the hip-hop and general musician communities on campus are strong and he’s currently working on bringing these artists together. He started up a club this year called AClass Company in order to set up a creative space. Malvasio described it as a place where artists can share ideas and collaborate on songs together. Its private Facebook group currently has 46 members from across the country.

“We’re really building a community,” Randolph said. “I hope by the time I leave, and even by the time the young cats that I know now are getting up in the ranks, I want to create a bigger and better hip-hop and artist community. That’s one of my big goals for this year.”

As for what makes a great rap, Randolph said there are many components, but first and foremost he listens to the beat followed by the lyrics. However, he said the quality of the song depends on many different factors, and the listening experience is unique for each listener. When it comes to his own songs, Randolph said he puts the most amount of attention into the beat.

“I focus on the beat first,” Randolph said. “If I really put my heart and mind to it, I could probably write to any beat, but I don’t write to any beat. It’s just not in me to make a turn-up song. That’s not what I aspire to do. I listen to a beat and if it really hits me, depending on what I’m inspired by at the moment, I’ll focus on the lyrics.”

For sophomore Dennis Smith, beatboxing is how he shows his passion for hip-hop. He joined the club IC Beatbox last year when it was first created and is still an active member. When it comes to rapping, he said he occasionally writes lyrics and is starting to put more meaningful content into his songs.

“I really enjoy beatboxing,” Smith said. “The boots and the cats I learned pretty young, like 11 or 12, and I started enhancing my skills when I joined IC Beatbox last semester. There are these different snare drum sounds that you can make, cymbal sounds, and also I like imitating sounds from movies I watch. Whatever I can imagine, I’ll beatbox it.”

Junior Casey Lederman, co-president of IC Beatbox, said she got into beatboxing after seeing Blake Lewis perform on American Idol in 2007. Immediately after the episode, she researched beatboxing on YouTube for hours and developed her skills on her own. Now, she leads other student beatboxers to hone their craft.

“We spend the last five minutes with what we call a beatbox circle,” she said. “One person starts, and then we all go in and build on this beat. By the end of it we’re all making noises and it sounds really cool.”

In addition to IC Beatbox, Pulse, the college’s hip-hop dance team, brings even more hip-hop to campus. Hip-hop dance is characterized by a wide range of dancing techniques such as popping, breaking or b-boying and locking. Other dance teams on campus, such as Ground Up Crew, IC Unbound and Step Team also use these dance techniques in their routines.

Senior Stephanie McCulloch had never danced hip-hop before coming to college, but after deciding to audition for Pulse on a whim, she made it in and has been dancing with the team ever since.

“[Hip-hop] is the only style that I know where you can let loose,” McCulloch said. “The music is upbeat, so you’re not restricted on how exactly you move your body … You don’t have to stick to a rigid style, you can just let loose the moment you hear that music. You can give it your all because it’s so easy to do.”

With a wealth of student organizations, including many informal gatherings like those on Fridays at the library, hip-hop culture is vibrant and growing on campus.

“It’s good to see that we’re thinking again because I feel like for a long time people weren’t thinking in hip-hop,” Malvasio said. “It was very stagnant for a while, and now that we have all this new blood in it I feel like it’s very good. Hip-hop is a powerful thing.”