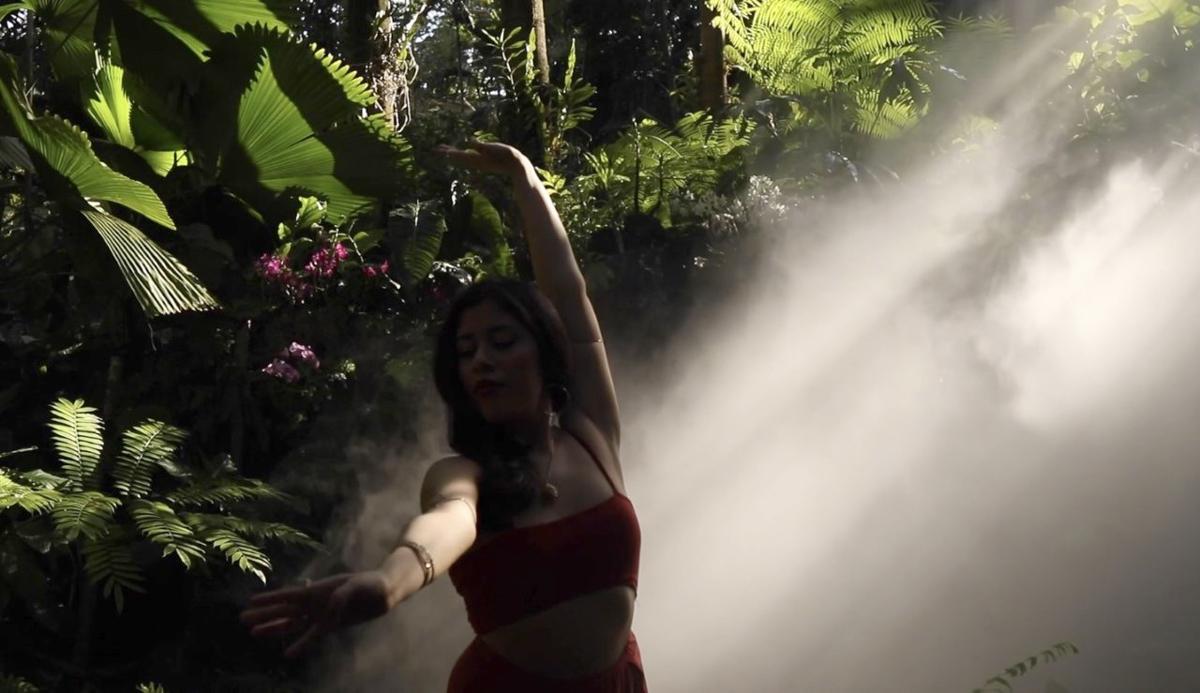 Mist and sunlight stream through the trees, and sounds of bongos and warm synths usher in the light, radiant voice of neptunemuse. A thick canopy of ferns and trees shade the bright, fiery jungle flame flower, forming a beautiful, lush paradise.

Junior Gaby Tola, artistically known as neptunemuse, sings of love, beauty and spirituality in her song “Jungle Flame,” which she wrote and produced herself in June 2020. Tola said that after the Ithaca College campus shut down in March 2020, she was void of distractions and able to focus on her music.

Tola said she wanted to bring light to the terrible events, like the rising number of police brutality cases and the devastation of COVID-19, that came to a head last June. While working on a series of paintings as a personal art project, Tola said the chorus of “Jungle Flame” just came to her.

“The songwriting process for me kind of comes like divine intervention,” Tola said. “I usually have to feel it in the moment. I’m not [a] sit down and write type of person. … I was doing a series on the female body in contrast to nature, and it just so happened that I wanted to paint jungle flames coming out of a rib cage.”

Tola said she has been writing songs since she was 13 but only started taking it seriously around age 17. As a writing major, Tola has experience with translating her feelings into the written word, and this semester, she said she is taking a songwriting class to improve her skills.

After releasing “Jungle Flame” as a single in December 2020, Tola wanted to push her creativity even further with an accompanying music video that came out in March 2021. Tola said that after being sent back to her hometown in Miami back in March 2020, she found peace within nature, which was the inspiration for the video. Paying homage to her Miami roots as well as the connection she has to the waterfalls in Ithaca, Tola said she decided to shoot the video at a botanical garden near her hometown.

“I was just kind of thinking about my relationship to this space, the settler space that is Miami, Florida, which is also Seminole land,” Tola said. “And just thinking about the fact that nature gives me peace and that … life is a really beautiful thing. So that was the meaning behind the song, to give myself peace, … and I wanted to convey the same idea for the music video.”

Tola said she also wanted to represent female safety and queer relationships through a dreamy, ethereal lens in the music video. She said she was drained from seeing queer love in the media only being portrayed through queer pain and trauma, so she wanted to go against that. Tola chose three of her friends to model in the video along with her and said the love in the video is an accurate depiction of their friendship. The video shows the friends freely frolicking around a field, hugging and holding hands in the warm sunlight. Tola sings, “I’ll show you where my soul resides / In the garden of the divine / Amongst the jungle flame.”

“I really wanted to emphasize the intention of, not only all of us being queer, but also being able to portray that real true love on the screen that my friends and I have towards each other,” Tola said. “I feel like there’s a lot of love there that I felt like would be conveyed on the screen. … It was very organic.”

Juniors Annie Marie Peña-Castellanos and Seidy Bobadilla, two of Tola’s best friends from Ithaca, said they went to Miami to be featured in the “Jungle Flame” music video.

Peña-Castellanos said that expressing the love that Tola wanted in the video was easy, especially since they had not seen each other since March 2020.

“All we had to do was be ourselves and embrace the scenery, the music and reconnecting with one another,” Peña-Castellanos said. “The emotions and happiness on screen was real emotion and excitement to be together.”

Bobadilla said that getting to see her best friend work on a passion project like this was an emotional experience. She said that being an artist, especially right now, is hard and that Tola had the time to make space for her art when the academic year ended.

“I’m super proud of her,” Bobadilla said. “This is something she’s wanted to do for a while. … It was just really nice to see one of my best friends going and actually doing something.”

Miami-based artist Yaemi Matias, who directed, produced and edited the “Jungle Flame” music video, said that while she has worked on similar projects before, Tola’s vision was unique.

“Sitting with [Tola’s] song multiple times and visualizing the elements always felt like I was immersing myself in this blissful jungle that she created in her song,” Matias said via email.

Matias also said she could see the love that Tola and her friends have for each other through the camera lens.

“Bouncing back and forth with [Tola] on ideas and [inspiration] was super fun,” Matias said via email. “Seeing her learn the choreography and deliver such a great performance really showed her commitment to creating a beautiful piece, and that inspired me so much! Her friends were really sweet, and you can tell that they have such a strong bond, that made everything flow so naturally.”

Bobadilla said that most of all, the “Jungle Flame” video represents who Tola is as a person. She said the nature of Tola’s friendships are reflected in the video, which gives the piece an even stronger connection.

“I really like the intimacy of the video; I think it gives it a much better connection to Gaby as a person,” Bobadilla said. “Anybody who knows [Tola] knows that she’s got a tight group of friends. …. So I think that the video is a really good representation of her and her music and what she hopes to achieve.”