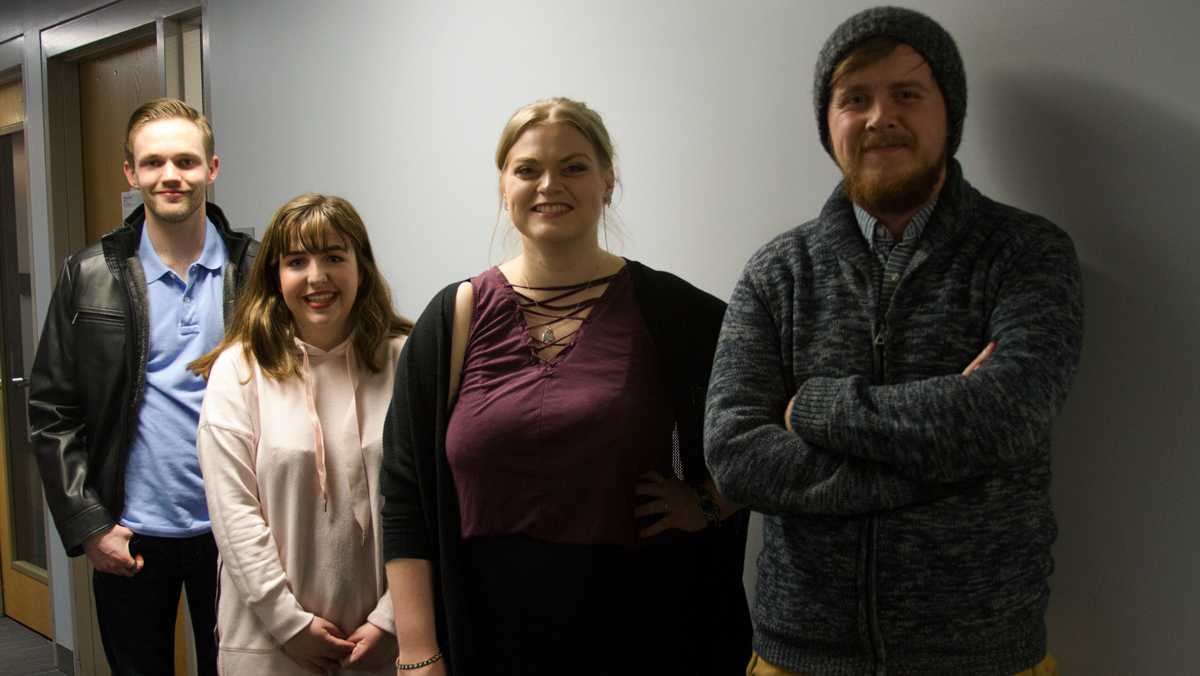 When junior Casey Schoch finished editing her film for her Advanced Cinema Production: Fiction class at 7 a.m. on the day it was due, she never imagined it would soon land a contract on Amazon Prime.

Schoch, a cinema and photography major, wrote, co-produced, directed and edited an 11–minute short film titled “Dead Weight,” during Spring 2016. The film follows the struggle of a woman, Miranda, as she tries to get rid of a dead body that her partner left her with.

During the summer of 2017, Schoch interned with Digital Media Rights, an organization that helps independent films make their way to Amazon Prime. Schoch said that while she was there, she was always eager to pick up new projects around the office but never mentioned that her own film had been accepted into six film festivals at that point. One night, Schoch was having dinner with her friend and her friend’s father, who worked at Digital Media Rights. He asked Schoch if she would like his help to see if Amazon would consider picking up a contract with her.

“I tried to seem as calm as possible,” Schoch said. 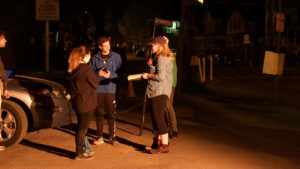 From left, Juniors Emma Beedenbender, Spencer Muhlstock and Casey Schoch talk about a shot on set of the student film “Deadweight.” The film landed a contract with Amazon Prime. (Courtesy of Casey Schoch)

Amazon offered Schoch a five–year contract for her short film. Once they offered her this deal, Schoch decided to meet with Phil Blackman, assistant professor in the Department of Accounting, and Jack Powers, associate professor and chair of the Department of Media Arts, Sciences and Studies. She wanted to meet with them so she could understand both the business and the film side of the contract. After hearing their advice, she signed a deal with Amazon.

Although she signed this contract, Schoch said she does not expect to see much profit off of the deal.

“Money is on my mind in college, but that’s not what I need to focus on right now,” Schoch said. “I’m happy to have this as a stepping stone to even better things.”

Junior Anthony Di Nizo was one of the co-producers of the film. Di Nizo said the two had trouble working on a script for the original film they had planned to produce. After trying to salvage their unsuccessful original idea, he said, he asked Schoch if she had any other story ideas and she pitched him “Dead Weight.” 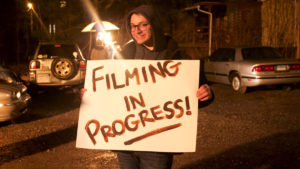 Di Nizo holds up a filming sign on set. (Courtesy of Casey Schoch)

Due to the temperamental Ithaca weather, Di Nizo said, filming was delayed many times, since they had to shoot their footage outside. Schoch said one major issue they faced was finding crew members. Because multiple days of shooting had to be rescheduled, each time she had to find new members to replace those who had conflicts. The finished product ended up being completed the same week the screening took place.

“Luckily, after the long and hectic shoot, post-production moved quickly and the film was able to be finished on time,” Di Nizo said. 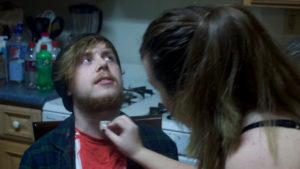 Beedenbender applies makeup on sophomore Charlie Simmons on the set of “Dead Weight.” Simmons played the dead body in the film that Miranda is stuck with. (Courtesy of Casey Schoch)

Once the two decided to pursue “Dead Weight,” Schoch began talking to her friend junior Emma Beedenbender about it. When Schoch offered Beedenbender the role of Miranda, she was thrilled because she said it was her dream role. After joining as an actress, Beedenbender also became an assistant producer.

“She gave me notes after every take,” she said. “Her confidence in me made the process easier.”

Beedenbender happened to be in an elevator up to the room she was staying at in New York City for the weekend when saw she had missed calls and a voicemail from Schoch. She immediately thought something was wrong. Once she found out that Schoch had called to tell her the film would be on Amazon Prime, she was shocked.

“It was such a surreal moment to be in the elevator with these strangers,” she said. “It was such a happy moment. I was so proud of her work, and the work that we put in and kept putting in even after the film was done.”

Beedenbender said having a contract with Amazon Prime has given them the chance to have an opportunity to share their work with people outside of Ithaca and to get feedback on their work. The film currently has 32 reviews on Amazon Prime. The majority of the reviews are positive, with the film being rated four stars out of five.

“Film is very much about sharing the art,” she said. “It’s nice to know that people I have never met have seen our work.”

Schoch said she is proud of how the finished version looked, especially because it was her first official film.

“It has its issues like every film does, and I recognize that, but I am so grateful for all of the opportunities I have been able to have with this,” Schoch said. 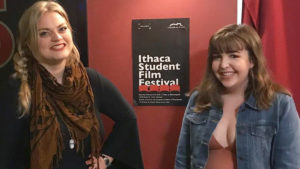 Schoch and Beedenbender stand at the Student Film Festival held at Cinemapolis. This festival is the seventh the film has been accepted to. (Courtesy of Casey Schoch)

Di Nizo said he was excited for and proud of having the film featured on Amazon Prime. Since student films are usually only seen by other students and featured in festivals, having “Dead Weight” on Amazon Prime allows for the film to get exposure outside of the competitive festival circuit.

“Subscribers and industry professionals now have the opportunity to see our work,” Di Nizo said. “This has been an amazing stepping stone toward our futures.

Since their collaboration on “Dead Weight” was successful, Schoch and Beedenbender decided to start their own production company together called EC Pictures. The company is in the beginning stages, and it is currently in the editing process of one film and the production of another. The two decided they wanted to collaborate on more than just “Dead Weight” since they worked so well together, Beedenbender said.

“It is really rare to find someone that you can trust so implicitly in an industry like this,” she said.

Two Ithaca College alumni, Landon Van Soest ’04 and Jeremy Levine ’06, took home an Emmy for their film at the 32nd Annual News and Documentary Emmy Awards on Sept. 26. “Good Fortune” was honored with the Emmy in the category of Outstanding Business and Economic Reporting — Long Form.