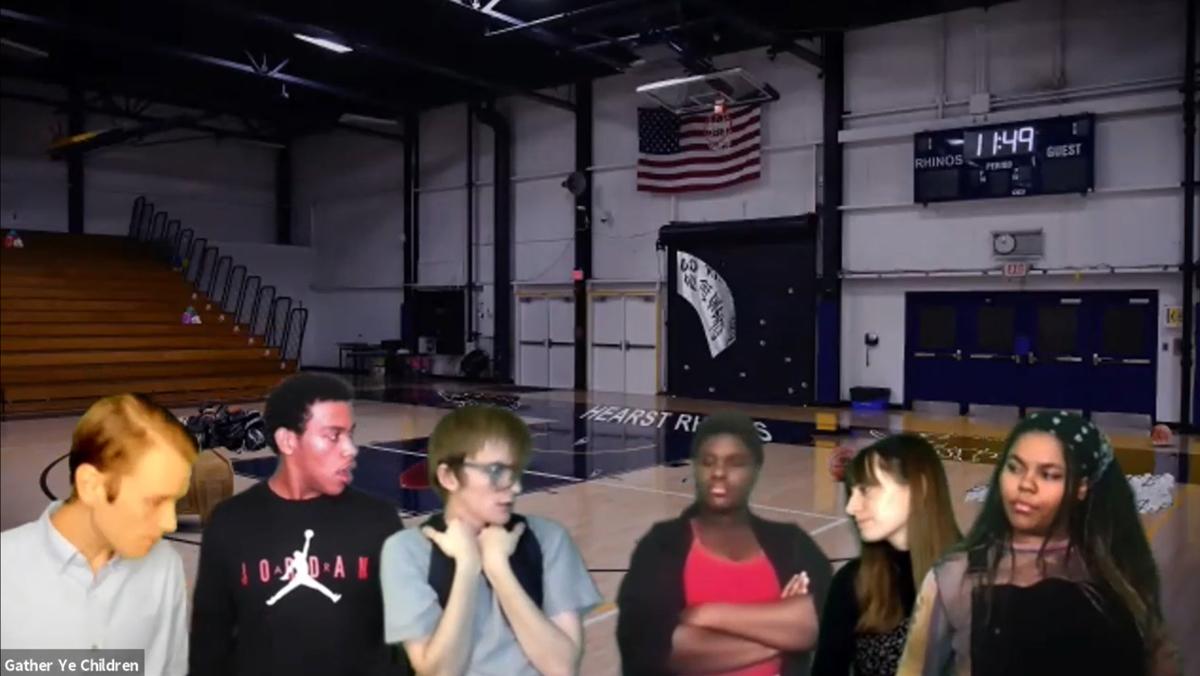 When attendees opened their laptops at the premiere of “Gather Ye Children,” their screens showed six confused teenagers in a disheveled school gym that was covered in blood and bullet holes — a prelude to the dark story about to unfold.

“Gather Ye Children,” written by Ithaca College senior Aaliyah Warrington, premiered over Zoom on Oct. 31, the first show of the college’s mainstage season. The play is about students stuck in a school gym after a school shooting. The students interrogate one another in an effort to determine who is responsible for the shooting.

Warrington said that she wrote the prologue and first scene in 2018 after viewing a video filmed by a student during the shooting in Parkland, Florida. She said that she tried to keep writing but decided to step away from the script, worried that if she worked on it, a school shooting would ensue.

“I remember distinctly that [the buildings] were testing fire alarms the next day or within that week,” Warrington said. “It happened in my building when I was living in West Tower. I remember them going off when I was researching for this play. … Then another one the next day went off in [Dillingham Center] while I was trying to write the next scene, so I go, ‘I can’t touch this play. Literally, alarms go off. I can’t touch this play.’”

Warrington said that she revisited this play in March 2020 in her advanced playwriting class. She said that because students were no longer in school because of the COVID-19 pandemic, she finally felt comfortable continuing the play. Warrington finished the play in April.

“I finished the first full draft on April 20, which was the 21st anniversary of the [Columbine High School] shooting,” Warrington said. “It was also … 15 days after my 21st birthday, so for about as long as I’ve been alive, school shootings have been casual.”

In addition to providing Warrington with the time and headspace needed to write the play, the pandemic gifted her a unique opportunity: the chance to have her play produced by the college’s Main Stage Theater.

The last student-written play produced by the main stage was “The Count of Monte Cristo” by Brett Boles ’07. Since then, the college has only put on shows written by professional playwrights, like “Pippin” by Roger O. Hirsen and Stephen Schwartz and “Dido and Aeneas” by Henry Purcell. However, because the mainstage season had to be adjusted to an online format, the college’s Department of Theatre decided to produce a student-written piece.

Rehearsals conducted over Zoom began Oct. 14, approximately two weeks until the premiere. Warrington worked with director Marc Gomes, assistant professor in the Department of Theatre Arts, as well 30 cast, crew and design members to make sure the heavy themes of the play were portrayed appropriately.

Junior William DeVary, who played the character Sam, said that dealing with such a dark topic created a sense of togetherness despite the physical distance.

“Going into the room, there was just a level of trust and care that we all had for each other because it is very emotionally troubling material that we have to work on in the show,” DeVary said. 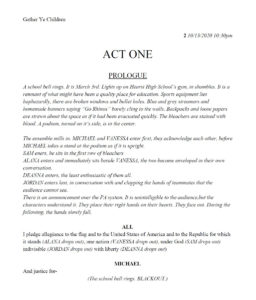 “You never really remember the victims unless you’re right there with the tragedy, and we only focus on the person who did it,” Ruby said. “Even with other crimes, it’s never about what happened to the victims. Reading this, it kind of rewired my brain to be like, ‘No, we should think about these people.’”

Warrington said that it was not just the topic that made the show a challenging process. The production team had to collaborate with the Live Event Production class taught by Chrissy Guest, associate professor in the Department of Media Arts, Sciences and Studies in the Roy. H Park School of Communications, to make the virtual performance a reality.

Junior Cameron Gasmer was one of the members of Guest’s class. He said that the creative team had every actor perform in front of a green screen so they could be put into a virtual set. This made it look like all of the actors were in the same space rather than in individual Zoom boxes.

Gomes said that although it was an adjustment for both departments, the collaboration ended up being a beneficial learning experience for all students involved.

“When a live television student or a film student has had direct contact with actors, directors and creative people in a different realm, they’re further ahead in what they can offer when they move into the profession and the same with performers and writers on our side,” Gomes said.

Gomes said that the cast, crew and creative team worked until the last minute to prepare for any technological problems. DeVary said that nerves were running high on show night, especially because of the virtual format.

“Over Zoom, it is truly a solitary form,” DeVary said. “It is just you, so that rush is there, and then you’re offering the most vulnerable moment literally to the void. You just have to totally give it over and have the trust to give it over and hope that it’s received by people on the other side, but you can never know for sure if it is.”

In the end, Warrington said that the show went off without any problems. Gomes said that there were approximately 200 attendees at the show, a high number despite the unusual circumstances. There is now a recording of the performance available for viewing until Nov. 13

DeVary said that he hopes people watch the recording of the performance because of its important message.

“It’s a play that provokes a reaction, which I think is wonderful, and it starts conversation,” DeVary said. “The play offers no answers, but I defy anyone to go away from this play without a whole host of questions.”

Theater professors wait in the wings during Broadway shutdown