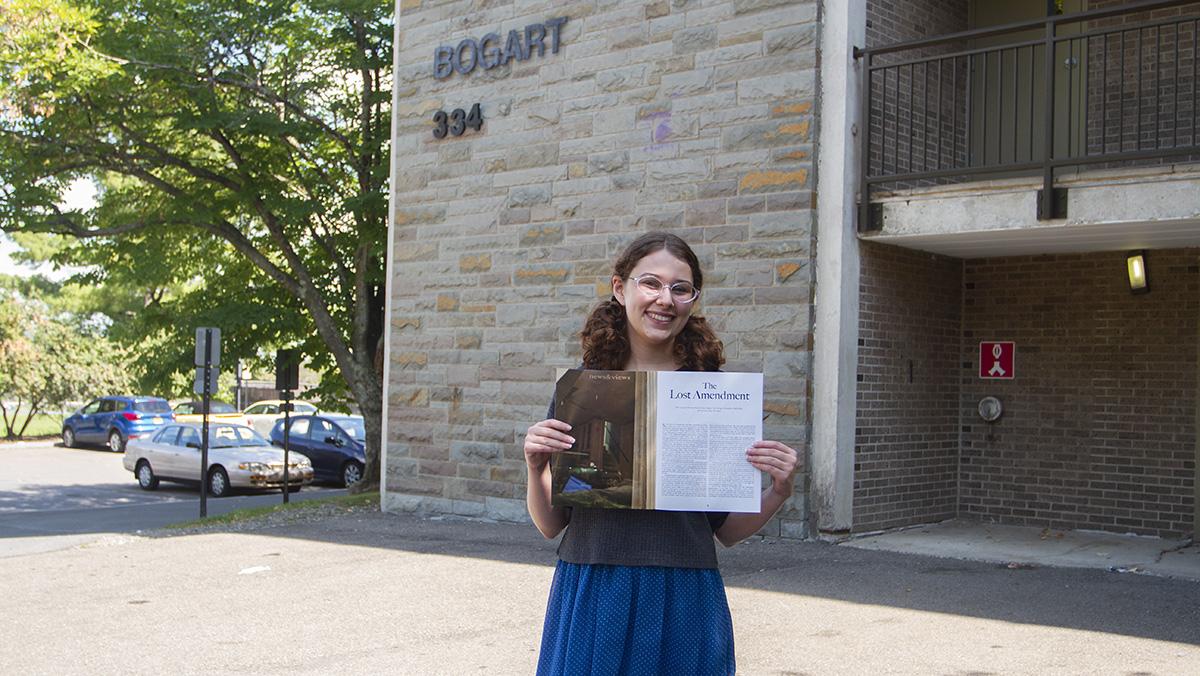 In a dusty room that smells of Old Spice deodorant in the basement of Bogart Hall, a student walks in and turns on the lights for the first time in what seems like eons. The bright halogen lights illuminate a familiar set of computers, a 20-year-old couch and a peculiar bottle of rum that no one remembers. “The Buzzcave” is home for some and marks the return of Buzzsaw Magazine to Ithaca.

This semester, Ithaca College has relaxed many of its COVID-19 restrictions, allowing the full return of students to campus and the continuation of fully in-person classes. With the entire student body back on campus, publications like Buzzsaw Magazine, Passion Project and others like Embrace and Stillwater Magazine, are able to print in greater numbers. Buzzsaw was founded in 1999 as an independent, student-run magazine that usually publishes six magazines per year. Buzzsaw publishes an array of content, including news articles, features, creative writing, music reviews and satire. Passion Project is an online publication that focuses on artistry and self-expression. Passion Project produces articles, podcasts, videos, photography and lookbooks.

Junior Adison Nadler, creative director for Passion Project, said she resonated with the focus of the magazine and felt that she had to publish her work with it. Shortly after publishing, she applied to be a member of the editorial board.

“It seemed like a good way to get my ideas out into the world,” Nadler said. “I just kind of wanted to share this story that I had been grappling with personally, and Passion Project is a really welcoming space for that.”

Carlos Figueroa, associate professor and legal studies coordinator in the Department of Politics, is the faculty advisor for Buzzsaw. He said that he is consistently impressed by how independent the students who run Buzzsaw are.

“When I say student run. I mean, literally, student run,” Figueroa said. “They do keep me informed about certain changes, but layout, recruitment, e-board configuration, everything’s done by the other students.”

Buzzsaw was able to print in the Spring 2021 semester, but due to the limited student population on campus, the magazine only printed a few copies of its “Lost” issue, which began distribution in Fall 2021. Like every Buzzsaw issue, “Lost” featured the publication’s most popular sections, like “News and Views,” which focused on critiquing the Academic Program Prioritization; “Raw from the Saw,” the magazine’s review section and “Prose and Cons,” containing personal stories and creative pieces.

Senior Rachael Powles, news and views editor for Buzzsaw, said the Buzzsaw editorial board is excited to see its work in the hands of more students this semester.

“We were able to print the last mag that we did on campus last semester, our ‘Lost’ issue, and we just distributed those the other night,” Powles said. “Going to class the next day and seeing people read our magazine was so special. It was so good to see people actually engaging with our material.”

Junior George Christopher has been a staff writer for Buzzsaw since his freshman year at the college and said he appreciates that the Buzzsaw issues’ themes are up for interpretation, which allows for even more creative freedom within the publication.

Passion Project was also able to print last year because the publication only releases one physical issue a year, but had to release far less content during the pandemic, due to the impact COVID-19 had on students’ lives, junior Eibhilin O’Reilly, executive director of Passion Project said.

Because Buzzsaw and Passion Project were unable to print as much in the pandemic, they shifted to a more online focused distribution method. Powles said Buzzsaw survived through the pandemic thanks to its website and social media teams.

“We are very lucky in that we have a really great website and social media and online teams who were able to make sure all of our stuff was up in a digital format when we didn’t print in person or have the budget to do so,” Powles said. “But now that we’re back we’re going to be printing our paper mag again, which is great.”

Moving out of the pandemic, the publications are looking to ramp–up production and return to a pre-pandemic release schedule, both O’Reilly and Powles said.

O’Reilly said she is looking to release four to five articles a month, and Powles said the magazine plans to release four or five full issues by May. Powles also said Buzzsaw is considering fully online issues as well as issues that will be released in hybrid forms this year.

Junior Surina Belk-Gupta, photo editor for Passion Project, said the COVID-19 pandemic has changed the way that many photographers shoot their work.

“In terms of photography at least, I think a lot of people’s styles have changed,” Belk-Gupta said. “Everyone has either relearned or discovered new things about themselves, so I think it will be interesting to see if the photo world has changed at all.”

Christopher said he is excited to get back to writing for Buzzsaw and to continue his creative writing, especially under a normal publication schedule with more content.

“I’m excited to get back to being able to express myself and express my thoughts,” Christopher said. “And that’s really why I liked working with Buzzsaw, because you get so much editorial freedom. At the very least I can say that in [the News and Views] section, I get a lot of editorial freedom in how I write and how I present both the news and my views in the magazine, and that’s something that … I didn’t necessarily see as an option in other outlets that we have on campus.”

“I feel like I wouldn’t be able to do it on my own,” O’Reilly said. “I have so many amazing people that help me spread past writing and do podcasts and website design.”

Figueroa said the absence of on-campus life due to the pandemic gave him a greater appreciation for the printed publications that Buzzsaw puts out. Now that students are fully back on campus, he said he hopes the creative magazine covers will draw in an even larger audience.

“The thing that was striking, of course, was not seeing the actual hardcopy on campus because no one was on campus,” Figueroa said. “It’s always great to see the creative covers and people always look out for that. The magazine has a history since 1999 of being very progressive, eerie, satirical at times. And it’s something that students are attracted to.”