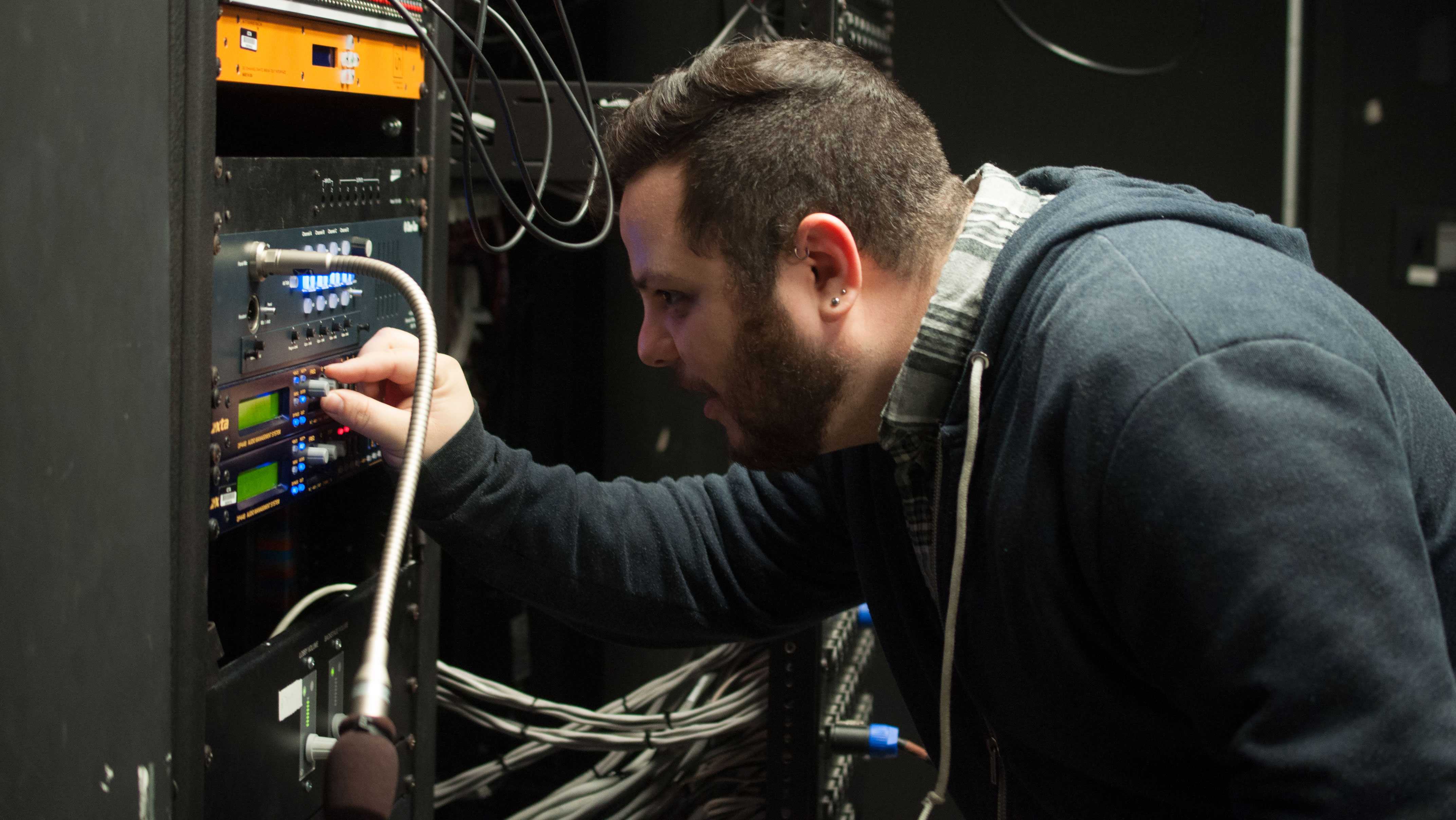 Stop and listen. Not to the words on this page, but to the surrounding sounds. Chances are there are many everyday sounds that no one pays attention to but would notice if they were gone. Josh Samuels’ job is to bring those sounds to the stage in order to create intricate sound environments for musicals, plays and films.

Samuels, a senior theatrical production arts major, has a passion for sound design. He has worked on many different soundscapes for musicals and plays on and off campus.

Samuels said sound designers perform a variety of tasks depending on what type of show they are working on. In plays and musicals, sound designers can do anything from adjusting sound levels on microphones to coming up with effects and music to develop the story.

“At its most basic, a sound designer’s job is to help tell the story of whatever show you’re doing using sound,” Samuels said.

Creating a story through sound has become one of Samuels’ main focuses during his time at Ithaca College. He said he believes all people are connected to sound in a way that is different from other senses, like sight.

“You can hear in all directions, so you are actually much more in tune with your heard world than your visual world,” Samuels said.

To Samuels, creating a soundscape is more about the story and emotional impact than the actual routine sound tasks like adjusting microphones. Samuels said the art of sound is a delicate process because so much is taken for granted. He tries to capture these “forgotten” sounds to make a theatrical environment as believable as possible.

Don Tindall, associate professor of theater arts, teaches most of the classes related to sound design and technology at the college, and he has become a mentor to Samuels. Tindall said one of the most remarkable things about Samuels is his ability to manage all of his responsibilities while being a full-time student.

“He doesn’t just want to do theater,” Tindall said. “He, as a student, has been very good at talking himself into Park classes and getting over to the music school to do other stuff, and I think he has taken full advantage of a lot of things that this campus has to offer. I think he’s kind of taken charge of his educational experience in a way that is admirable, in terms of getting what he wants out of here.”

This semester, Samuels is working on two performances. He is working with a guest director on an off-campus show, “I and You,” and an on-campus show, “Anonymous.” He already has plans for other performances in the spring, but right now he divides his time between the two shows and his full-time student responsibilities.

Wendy Dann, associate professor of theater arts, worked with Samuels in “Anna in the Tropics” last year and is currently his directing professor. She said his ability to tell emotional and impactful stories is due to his imagination.

“He has a very vibrant imagination,” Dann said. “And he understands story and scene, and he’s able to write and/or select music that’s going to really highlight the big plot points and support those moments that are more thematic. He’s really young to be so intuitive.”

Dann said Samuels’ passion to use sound to develop a great story and his dedication to school and sound is setting him up for future success.

“I imagine great things for Josh in the future,” Dann said. “Sound design is one of the most exciting fields today. Our generation is very cinematic. Our experience of the world is very aural, and I think there are very few people who choose this path, so I think he is going to have a pretty exciting career.”

For Samuels, he is looking forward to the future, but currently his primary focus is on the shows he is working on. He said his favorite part about putting on a show is the reactions of the audience members.

“That moment when you worked hours and hours and hours on a show and you finally get it in front of an audience and, you know, your sounds go up in front of a room full of people that have never heard it before and when everyone has the reaction that you want them to have, that’s great,” Samuels said.