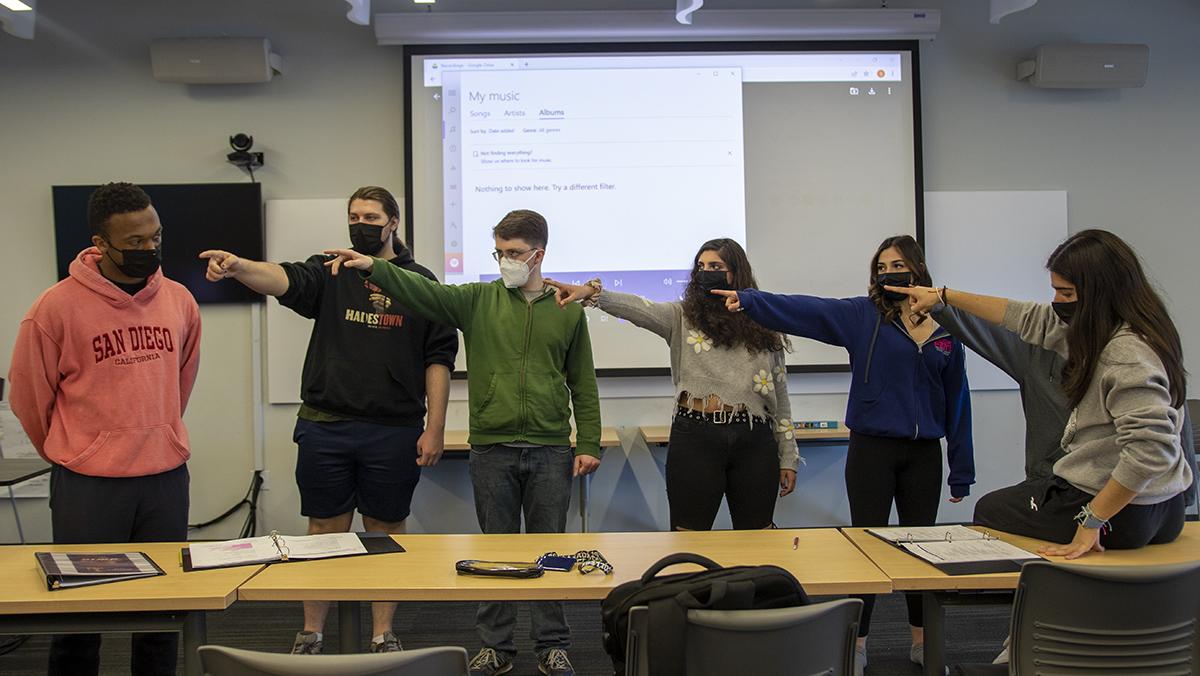 “And then you’re going to turn your head!” directs freshman Sophia Maiello. A group of students follow her lead, turning their heads to the beat of orchestral music playing through the speakers in a Hill Center classroom. Maiello is teaching the group of students the choreography for the entirely student written, composed and casted musical, “Burr.”

Freshman Sam Wurdemann, music major with a vocal concentration, said he has had a passion for playwriting and composing since he was in the seventh grade. He nurtured his interest by putting on plays like “Alice in Wonderland” and “Willy Wonka” in his childhood backyard — a hobby that has led him to his biggest and most challenging production yet: “Burr.”

After “Hamilton” was released on Disney+ in July 2020, Wurdemann said he was struck with inspiration by the musical’s history and its characters. “Hamilton” is a musical adaptation of Alexander Hamilton’s life story, but Wurdemann took a liking to Hamilton’s nemesis, Aaron Burr. He took to Wikipedia, and while looking at Burr’s page, he came across a section titled, “Conspiracy and Trial.” The page detailed Burr’s life after he shot Hamilton and his rather unknown plans to venture West and establish a new country to overtake the United States. Wurdemann said that he was absolutely fascinated by this untold story and that he thought it deserved the same treatment that “Hamilton” got.

“This is so interesting and compelling, but the fact that it hadn’t been made into a story yet is insulting to me,” Wurdemann said. “So I’m going to do it.”

Wurdemann wrote “Burr” to feature mostly musical numbers with both hip-hop and R&B influence, taking inspiration from “Hamilton’s” composition. Wurdemann said that composing and writing these styles of music while also telling a story with historical accuracy was brand new to him. Although it posed a great challenge, Wurdemann said he conducted months of research both reading the book “American Emperor” and listening to beloved hip-hop artists like 2Pac, Eminem and Biggie Smalls.

“I was looking for the kinds of artists who could basically do lyrical gymnastics,” Wurdemann said. “I’m very picky about my lyrics, so I’m only going to listen to the people who I think can do it better than I can.”

“Burr” contains a total of 16 numbers, all written and composed solely by Wurdemann. He said that it took him two years to write and that the most recent version was finalized two weeks ago. In the midst of the writing process, Wurdemann recruited a team of Ithaca College students to work alongside him to make “Burr” a reality.

Junior Cris Rabines, a theater arts management major, had worked alongside Wurdemann at a cabaret performance for IC Second Stage during the fall semester. Rabines said the two of them clicked automatically and had an immediate creative connection. It was during this time where Rabines said she heard about Wurdemann’s idea for “Burr,” and it caught her interest right away.

Rabines said Wurdemann contacted her in November 2021 and asked her to work alongside him as producer of “Burr.” Rabines agreed because she said she saw the show’s potential to run independently and not with one of Ithaca College’s theater organizations.

“The more I thought about it, from a producer standpoint … the vision we have for the show maybe doesn’t fit perfectly with what [the college] already has,” Rabines said. “So nothing is stopping us from doing this on our own.”

Rabines and Wurdemann soon began to work on establishing a creative team of five: Wurdemann as writer and director, Rabines as producer and marketing manager, junior Allie Lewis as stage manager, Maiello as choreographer, and sophomore Olivia Celenza as production liaison.

Rabines said she is excited to see such a diverse cast — a decision that stays true to the original casting choices of “Hamilton,” which is led almost entirely by people of color — and said she mentioned to Wurdemann from the beginning that inclusive casting was important to her.

“Getting to showcase the talent that we don’t really get to see in productions [at Ithaca College] because it can be a bit daunting as a person of color to audition for things when the school is so predominantly white,” Rabines said. “It’s cool to have a little production that has all of this [diversity] coming from everywhere.”

Since Rabines is currently studying abroad in London, Celenza will step in to assist in producing the show. Celenza said she works closely with both Rabines and Wurdemann through scheduled Zoom calls and consistent communication. Celenza said that being a part of “Burr” has been an incredible experience and that she is excited for the performance.

“I know how passionate and dedicated [Wurdemann] is from seeing what he’s able to do,” Celenza said. “And to see the little show that he was writing come to life in such a huge way is something that I am just so proud of.”

As producer and production liaison of “Burr,” Rabines’ and Celenza’s main roles are to manage the production’s Instagram and raise funding for the musical through a GoFundMe. So far, the team has raised $420 of its $1,000 goal. Wurdemann said the funding is for equipment, costumes, set design, props and reserving a space for production. The rest of the funding will go toward the production with a new cast that will take place at the Minnesota Fringe Festival in August 2022, which Wurdemann applied for and got accepted into this semester.

The creative team plastered posters all over the college’s campus to hunt for a cast. Auditions were held Feb. 25 and 26 and 10 actors were cast in iconic historic roles like Thomas Jefferson, Theodosia Burr Alston, Jonathan Dayton and of course, Aaron Burr.

Junior vocal performance major Lily Kimball Watras said she saw one of the posters and went to the team’s website to listen to a couple of the songs. Watras said that hearing the songs inspired her to audition because of their “Hamilton”-inspired sound and stylistically interesting composition.

“It was very well written and impressive to me that a student had done that,” Watras said. “I’m excited that we’re premiering it.”

After getting cast as Theodosia, Burr’s daughter, Watras said she is looking forward to being a part of the production and gaining more musical theater skills.

Since “Burr” is independent from any theater clubs at the college, it has given students who may have strayed away from musical theater a chance to perform again. Freshman and Ithacappella member Jaiden Collier said he used to be heavily engaged in musical theater in high school, but drifted away from it in college. Collier said he is close friends with Celenza and saw a post about “Burr” on her Instagram story. Celenza encouraged Collier to audition, and he wound up as the star of the show: Aaron Burr himself.

“I think it’ll be a challenge for me to play [Burr] because of how high some of the notes are, and how I’ve typically done comedic characters up until now,” Collier said. “So doing something a little more serious will be very [interesting]. And I don’t know if I’m the best rapper, but we’ll see.”

Despite feeling some uncertainty, Collier said he is excited to tell the story of Burr alongside his fellow castmates. He said that since the musical is based on true history, he is looking forward to being a part of a story that doesn’t shy away from the darkness of its characters by not being afraid to paint Burr as the villain.

Rehearsals for Burr take place three times a week for two hours each. The cast members learn three to four songs per week: from the blocking, to the music, to the choreography. Maiello, “Burr’s” choreographer, said Wurdemann reached out to her after they worked together on Ithaca College Second Stage’s “The Addams Family,” where she was dance captain. Maiello choreographed five main dance numbers entirely on her own, and then worked with Wurdemann on the rest of the songs.

“I sit down and have to listen to the song and visualize it first,” Maiello said. “Naturally my body will start moving and then I’m like, ‘OK. This makes sense.’”

As of now, Wurdemann said “Burr”is a quarter of the way rehearsed, and the team is set to debut in Iger Hall in the James J. Whalen Center for Music in late April. Tickets will soon be available via the team’s Instagram page. Wurdemann said he is excited to see everything come together and that he is beyond proud of his cast.

“This has become so much more than just my vision,” Wurdemann said. “And I’m excited to see everybody else get the chance to thrive.”