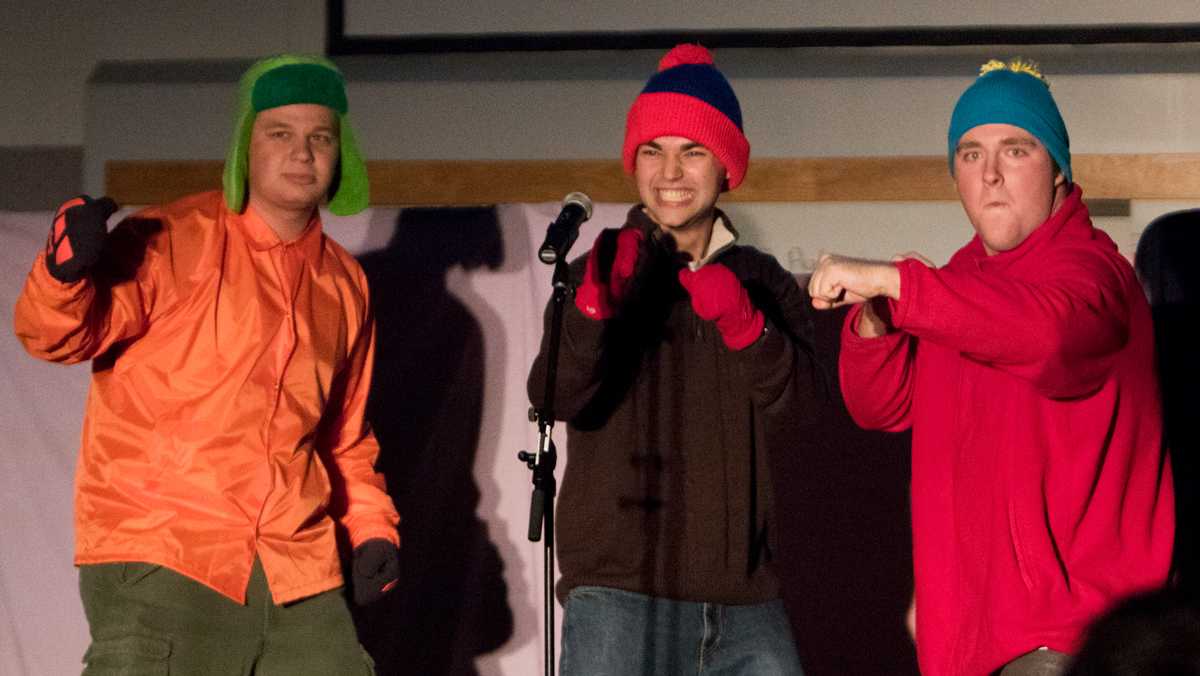 Kristen Harrison/The Ithacan
From left, sophomore Joshua Isaac, freshman Nick Ryan, and sophomore Lucas Hickman act in “South Park: Bigger, Longer & Uncut" that was held at the college in Fall 2017. Isaac is one of the founders of the new theater group on campus, Theatrists Theatrics.
By Kara Bowen — Assistant Life and Culture Editor
Published: January 23, 2018

The students behind Ithaca College’s staging of a “South Park” movie musical last semester have created their own organization — and a new word — to bring nontraditional theatrical productions to campus.

In Spring 2018, the group plans to stage a version of the musical “Grease” in which the gender of each character is swapped.

The organization’s name contains the word “theatrist,” a word created by the group which means “someone who participates in many aspects of theater, such as the production side, the artistic side or the executive side.” Sophomore and co-founder Jeremy Werner created the word to describe himself and his friends.

“We felt like we didn’t have a specialty,” Werner said. “We like to do all aspects of theater, and we didn’t feel like there was a word for that. Out of the blue, I came up with the word theatrist.”

Theatrists Theatrics had already produced one musical before deciding to formally become a group. In December 2016, sophomore Joshua Isaac suggested to Werner that they put on a staged version of “South Park: Bigger, Longer & Uncut,” a musical comedy film based on the television show “South Park.” The pair asked sophomore Jaime Rockafellow to be stage manager for the show, which premiered Oct. 28 and 29, 2017 and was funded by donations and the three founders’ personal funds.

After the large attendance of the musical, the three decided to continue putting on productions by creating their own formal group. The group closed its online application to become members on Jan. 22. It must reach the minimum 10 members required to be recognized as an official club through the Office of Student Engagement and Multicultural Affairs. “Bigger, Longer & Uncut” involved 19 cast members as well as a pit orchestra.

“We didn’t want to stop there,” Isaac, who is now the artistic director, said. “We’d talked to a lot of people who’d like to see shows . . . spotlighting a different kind of musical or aspect of pop culture.”

Rockafellow, who is the executive manager, will be directing the upcoming production of “Grease.”

“When you think of “Grease,” it’s very 1950s-era with very stereotypical gender roles, and the girl changes for the guy,” she said. “With the gender swap, I’m hoping to show people how weird the gender norms are that we have. I’m hoping the differences between them will be heightened when they’re switched.”

Werner said the group wants to produce obscure and original plays, as well as adding its own spin on existing shows. It is planning a production of “Plague! The Musical,” a dark comedy–musical based on a London outbreak of bubonic plague in the 1600s, for Fall 2018.

“We want to make it interesting and give people a reason to come other than just seeing a student production of a show they like,” Werner said.

Isaac said the group wants to reach out to the community and provide a platform for students to showcase their original work. Werner has used this opportunity to begin writing the script and music for a potential show about a boy’s adjustment into a special education classroom.

“We want people to be able to come up to us and say, ‘Hey, I want to put on this kind of show, can your theater company help me do it?’ which I don’t know that other theater companies on campus do,” Isaac said.

He also said the organization will expand to include comedy shows and other live performances beyond plays and musicals. The group will also be producing a comedy showcase on March 2. Werner said audition dates are not yet determined but will be held before the first week of February.

The application to join the organization included questions that asked to define what a theatrist is and how applicant embodied the word.

“We wanted people that embodied what we call theatrist people — people who wanted to explore . . . all the different aspects, whether it be artistic or executive.”

While Romeo and Juliet may have wanted nothing more than to be together in harmony, some of William Shakespeare’s other literary duos inspired students at Cornell University to wage a red-hot battle of the sexes on stage Friday night.

‘What’s in a name?’: Student explores gender through Shakespeare

Age on Stage project brings together young and old

Kevin Greene ’06 is one of six finalists competing on the reality series, “Grease: You’re the One That I Want,” which airs at 7 p.m. Sunday on NBC. He is vying for a starring role in the upcoming Broadway revival of the musical. Contributing Writer Danielle Paccione spoke with Greene, a native of Greece, N.Y.,…