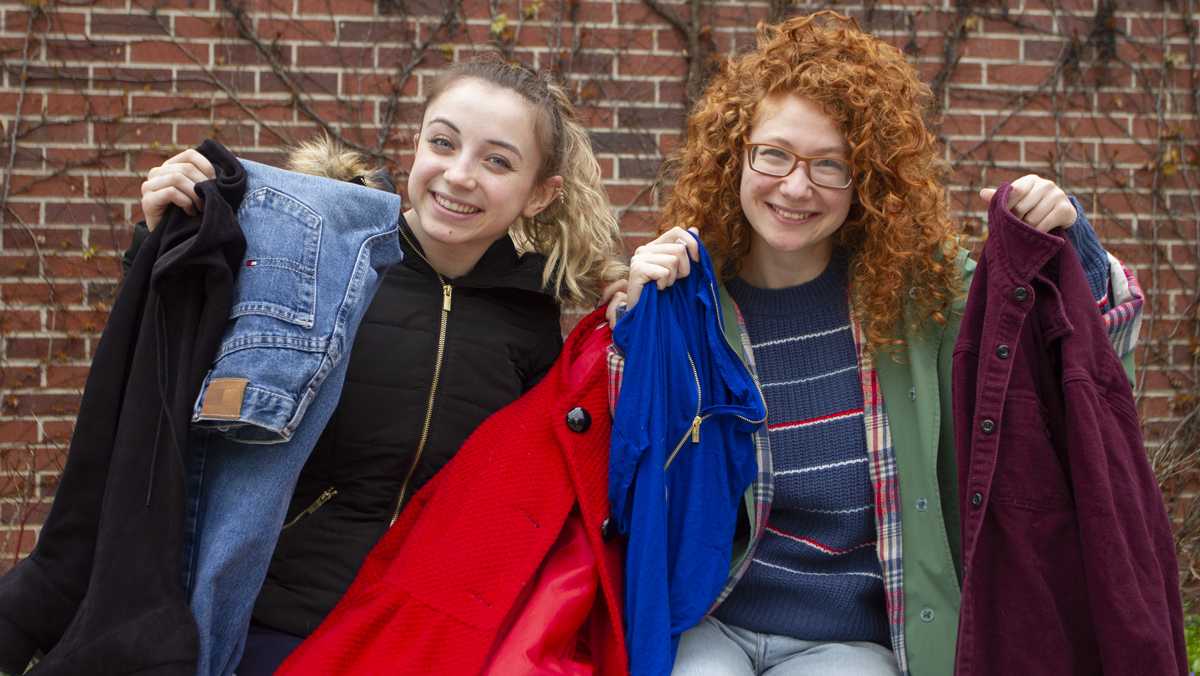 Rows of photos load onto the screen, each showing someone wearing a different article of clothing. One picture has someone wearing a polka dot wrap dress with a three-quarter sleeve, advertised for $10. Another displays a $12 pair of navy sailor shorts, complete with a brown belt and a yellow sweater. In the comments, users are bidding whatever prices they can afford for these clothing items.

The Instagram page, Thriftaca, is a pop-up thrift store created by Ithaca College juniors Emma Zarabet and Samantha Marks. Marks said she and Zarabet have a love for thrifting and go thrift shopping at local stores every Thursday but soon found that they had too many clothes and not enough space to keep them all. Along with selling extra clothing that she and Zarabet no longer need, Marks also purchases clothing from local thrift stores to be sold on the Instagram page.

“Basically, we have a shopping addiction, and it just got to the point where we were just buying stuff because we liked the aesthetic, but maybe it just wasn’t for us,” Marks said. “So, the idea of being able to shop and know it’s for other people and be like ‘Oh, this is cute, maybe it’s not for me,’ or even pull stuff out of my own closet and give to others is really cool.”

The pop-up Instagram shop, which has been running since April 16 and has 73 followers as of April 30, will continue until the end of Spring 2019. Zarabet said Thriftaca works similarly to other sites like the popular thrift website Poshmark, where users can list new or used clothes to sell and bid on products on other users’ pages. However, with Thriftaca, she wanted to give thrifting a more personal feel.

“These sites are all the same concept, but it kind of just feels like you’re shopping around from people all over the world, and you pay shipping for it and that’s that,” Zarabet said. “We wanted to make our site central to Ithaca and market it as a pop-up, so it’s more personal in that way, and people can ask us any questions they have about the products, or even come over to try them on before they decide to purchase them.”

Junior Haley Rosenwald first heard about Thriftaca through one of her friends and decided to follow the Instagram page to check out the items. Soon, she found a pair of red high-heeled shoes that she fell in love with and bought them for $10 a few days after the account posted the picture of them. She said her favorite part of the experience was how simple the process was compared to other thrift websites or stores.

“I liked that it was just a friend selling me shoes she no longer wears rather than going elsewhere because it was an easy exchange,” Rosenwald said. “I just stopped by their apartment, they were in good condition and the price was doable.”

Though thrift shopping can serve as a fun activity to bond with friends, as it does for Zarabet and Marks, it can also be a sustainable way to purchase clothing. By purchasing used clothing, the number of chemical pollutants that are deposited into the air and water runoff from manufacturing these products can be reduced. Thrifting can also aid in water preservation. For instance, it takes 2,108 gallons of water to create a pair of jeans and 659 to create a T-shirt, according to the Water Footprint Calculator. According to Secondary Materials and Recycled Textiles (SMART), the average American sends about 80 pounds of clothing to landfills each year when 95 percent of it can be reused or recycled.

“It cuts back on the necessity of producing more clothes because if we’re exclusively buying new clothes, that puts demand on resources and energy,” Hanlon said. “The resource production cost has already been covered for the clothes in their first purchase, so purchasing used clothes doesn’t have that same production cost because it’s already been produced.”

In recent years, stores like Goodwill have become increasingly popular, causing the thrifting industry to gain approximately $17.5 billion per year in annual revenue.

Though thrifting is a fun and trendy activity that is also good for the earth, many people do it out of necessity, not aesthetics or trends. Hanlon said sustainability has three pillars: people, planet and profit. In addition to helping the planet, thrift stores’ affordable styles also help people.

“Normalizing thrifting helps normalize a form of consumption that is a lot more economically feasible for a lot of different people,” Hanlon said.

Marks said that though Thriftaca started based on her love for shopping, it has the opportunity to make fashion more accessible, especially to college students.

“I think thrifting, in general, is meant to make fashion more accessible, but it’s not always so easy to find fashionable or stylish things amongst some of the more outdated styles,” Marks said. “We try to narrow down the selection to things we ourselves like and think can be applicable to today’s trends. Therefore, Thriftaca is certainly a way for people to find cute, relevant pieces for low, affordable prices in a way that’s more tailored than regular thrift stores.”

Zarabet also said she believes Thriftaca stands out from these other thrifting avenues because of its focus on sharing the creators’ own styles to a smaller community.

“I like to think of me and Sam as pretty funky, and we try to be fun and colorful with our outfits,” Zarabet said. “A lot of the clothes we’re selling are clothes we would wear or have worn, so it kind of has our own touch to it, which is pretty awesome.”

As for future plans, Zarabet and Marks do not have any set yet. They are both planning on studying abroad in Los Angeles during Fall 2019. However, Marks said she hopes to expand Thriftaca to a wider audience.

“In general, it would be cool if there was a page where anybody who had anything could post,” Marks said. “I think it would allow people at Ithaca or Cornell to not only get to swap things with one another but have the opportunity to make new friends within the general Ithaca community too.”