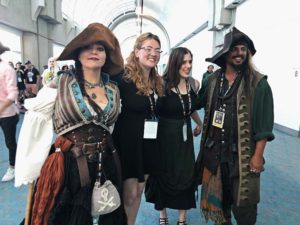 Naomi Hanson ’19 and Krista Rozanski pose with two con-goers who are dressed as pirates. (Courtesy of Ed Catto)

In July, an estimated over 130,000 people attended San Diego Comic-Con at the San Diego Convention Center. This convention, the largest comic convention in the world, offers many activities, and the highlight of every attendee’s experience varies immensely. For some con-goers, it might have been seeing the cast of the widely popular show “Supernatural” host a panel in preparation for its show’s last season. For others, it could have been hearing professionals from Marvel Studios announce phase four of the ever-growing Marvel franchise. But for Naomi Hanson ’19, her most memorable moment was having hundreds of people — many dressed as pirates — give her a standing ovation after her panel about historical pirates and their fictional representations through pop culture.

“I’ve been to a lot of academic conferences where there were five or 10 people in the room, and they were all really quiet, but this was totally different,” Hanson said. “I had two people right in the front who waited two hours for my panel and a line of people who were waiting to get into my panel, and everyone was so encouraging. I felt like a celebrity.”

Hanson was just one of the Ithaca College students invited to attend this year’s San Diego Comic-Con alongside faculty members. Anyone who wants to be a panelist at San Diego Comic-Con must fill out an online form and then submit it to the convention for consideration. Hanson said she has always been interested in pirates — her senior thesis focused on a comparative study of three historical female pirates. However, her journey to San Diego Comic-Con did not only start with her interest in pirates but rather through a class she took with business management lecturer Edward Catto.

“In that class, I would just talk about pirates because that’s what I do, and he just thought that was really interesting,” Hanson said. “And

in the middle of class one day, he was like, ‘You know, yo

u should apply to San Diego Comic-Con. I’ll help you.’ … I took his advice and went for it, but I thought there was a million in one chance that would ever happen. But boy, I was wrong because I got it.”

The class, ITHACON: Promoting and Managing Conventions, was a combined business and English class co-taught by Catto and Katharine Kittridge, professor in the Department of English. This class allows students from all majors to design and promote Ithaca’s annual comic convention, which is the second longest-running comic convention. Last semester was Catto’s first year teaching the course, but he has plenty of experience with comics and pop culture. Besides his work at the college, Catto is the partner and co-founder of Bonfire Agency, a consulting firm that helps brands market and engage with influencers of “geek culture.” He is also a partner and cofounder of Captain Action Enterprises, a toy and comic company focused on rebranding and developing vintage comic figures. Catto has also hosted and participated in numerous panels at comic conventions throughout the country. At this year’s San Diego Comic-Con, he hosted panels about licensing in the entertainment industry and how p 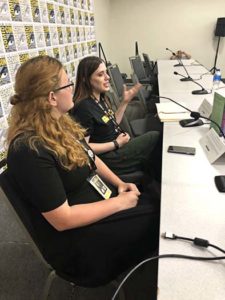 Hanson and Rozanski sit in a panelist room and speak at the convention. (Courtesy of Ed Catto)

Besides inspiring Hanson’s interest in doing a panel on pirates, Catto also moderated it. He said he was initially drawn to Hanson’s project because he related to her interest in niche topics.

Comic fans, but, in reality, there’s a ton of topics of so many things that, even to guys like me, can seem so obscure but are celebrated at these conventions,” Catto said. “As long as there’s a fandom to it, it makes all the sense in the world.”

Catto said that participating in this diverse convention community reminds him of the enjoyment he found in comic books and at conventions when he was younger.

“When I was a kid, I bought a lot of comics, and I went to ITHACON in Ithaca before it was on campus, and that was my first time being exposed to comic conventions,” Catto said. “Since then, I’ve had a lot of crossover within the comic and business world, so being a part of things like San Diego Comic-Con makes me feel like a kid again.”

Hanson and Catto were not the only Bombers to participate in this year’s San Diego Comic-Con. Sophomore Julia Salvatore also took part in the convention in which she and Edward Schneider, associate professor in the Department of Strategic Communication, presented their research project, “Heroism and Head Injury: Comic Books & Attitudes Towards Traumatic Brain Injury.” Their research focused on how head injuries are represented in popular comic–book series like Batman and Spiderman. Fueled by her interest in psychology and her psychology minor, Salvatore said she combed through comic books and recorded how many times there was a head injury and noted the effect it had on characters. Salvatore said she also used this information to talk about the common misconceptions behind head injuries.

“I didn’t even know comic conventions did research, and I never really thought of them like that,” Salvatore said. “It was definitely a huge learning experience for me because not only was I able to go to such a cool event, but I was able to learn about how other people did their research and what inspired them to do it so that possibly in the future I can do my own research.” 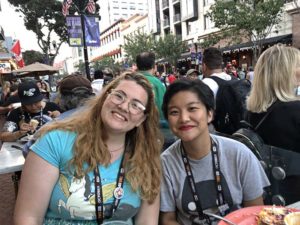 For other students who may want to delve deeper into a topic and participate in major events like San Diego Comic-Con, Hanson said she encourages others to find what intrigues them and go for it.

“I’m not even sure if I’m a good historian, but I just think my niche has taken me really far,” Hanson said. “If you’ve got something that you’re really interested in and passionate about and you think other people might find interesting, totally lean into it and try to capitalize on it as much as you can.”