Students gain confidence through stand up and sketch comedy 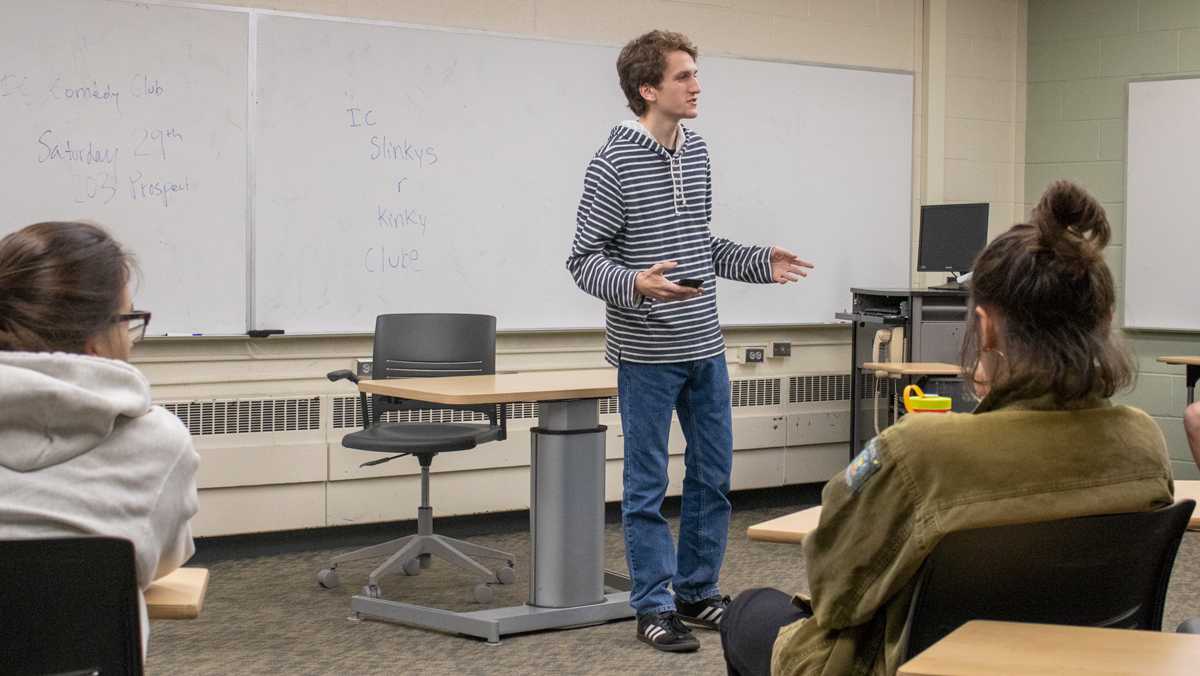 Every Tuesday night, laughter fills Friends Hall 210 for the weekly IC Comedy Club meeting, where Ithaca College students watch their peers leave their comfort zones to perform comedic acts. While some students usually do stand-up and play improvisational games, others will sit back, laugh and enjoy the show.

The college is home to three other satire-related clubs outside of IC Comedy Club — IC Stand Up, Acahti Players, which focuses mainly on improv, and IC Sketch Club, which produces short skits. All the clubs focus on a different genre of comedy and provide more opportunities for students. Senior Ariella Ranz is the president of IC Comedy Club.

Ranz said they started with comedy back in high school where they did theater. They said their love of making people laugh has evolved ever since.

“Comedy Club is cool because we can do a variety of things and do whatever we want to do,” Ranz said. “Sometimes, we’ve done live improv of ‘Back to the Future,’ comedy shows that incorporate sketches and stand-up and we even did an open mic at my own house.”

Ranz said membership in IC Comedy Club varies — some meetings will attract up to 50 students, including people who just attend to watch. The club has created an environment where students can share comedy sketches, receive and give feedback and work on their skills.

Ben Coates is a senior member and the treasurer of IC Comedy Club and was practicing one of his acts at the group’s last meeting Oct. 2, which was a raunchy stand-up about festive nudes themed for every holiday. The entire room burst into laughter and applauded him for his amusing act. Ranz said Coates’ suggestive sense of humor has come a long way since his humble beginnings when he joined the club as a freshman with no experience.

“There were other freshmen I knew that were also interested, and I thought that the president at the time, Ryan Ciecwisz, was very funny,” Coates said. “So, I thought I would give it a try. The first club meeting I didn’t do anything, but I thought it was hilarious. After a few weeks, I tried stand-up, and people liked it, and it became a fun thing to do.”

Coates is one of many members of IC Comedy Club who crosses over with some of the other specialized comedy clubs on campus. Ranz said they would like to see the club expand beyond the limitations of the College’s small campus. They said they specifically want to perform at more comedy festivals outside of the Ithaca community and get in touch with comedians, especially in New York City and Syracuse, New York. The club has also made some changes to its club meetings over the year to attract more students to the comedy scene.

“Comedy Club used to be a straight hour of stand-up and then an hour of improv and after the first hour, there would be a mass exodus of people after stand-up,” Ranz said. “The president last year incorporated this thing where we would do two stand-up acts and then two improv games to mix it up so people wouldn’t just leave.”

Senior Joey Diven is an active participant of IC Comedy Club, but he is also the co-president of  Acahti Players. He said the improv-centric club Acahti Players puts on approximately five performances a semester, but they’re cutting it back a bit due to a low number of performers. This club is different from IC Comedy Club because it gives students a chance to dive deeper into the world of improv.

“Acahti is the long-form improv team,” Diven said. “There’s five of us that are the core members, and we usually have about 10 or 12 members, but this year it’s a bit short. We rehearse a lot for our shows and have open improv at our club meetings, as well as play games that are easy for people to pick up and teach the fundamentals of comedy improv.”

Coates said IC Comedy Club is an outlet where students can go to receive some validation and feedback on their comedy acts. He said the most active members in the club are Roy H. Park School of Communications students because comedy performance helps with confidence and communication skills, which are important in media fields.

“It’s a social club where you meet people and friends,” Coates said. “Professionally, it’s a big confidence booster. Since I’m a TVR major especially, this is really helpful for pretty much any Park student, as being comfortable in front of crowds is useful. I suppose when they talk about comedic timing, it helps to understand timing in general, which is useful for media.”

Coates said he praises the comedy clubs for their light and fun environment. He said he believes it is more of a social group than a professional one.

“My favorite part of the comedy club is either the conversations that happen in between the actual time where we’re doing the club or the improv,” Coates said. “I would say being with people I consider friends and playing around is definitely why I keep coming back. The current club is pretty homogeneous, both by the kind of people coming and the fact that everyone knows each other, so it would be nice to see some diversity of any sort.”

Diven said Acahti Players is putting on its first official performance of the semester at 8 p.m. Oct. 12 in the School of Business room 103.

“We’re always looking to get more people involved in comedy and inspire the community to lose those apprehensions they might have about it,” Diven said. “When I was a freshman, I was super anxious about the comedy scene and getting into it, but once you get to know people and spend more time with us, it is a really comfortable and fun environment that I think a lot of people get a lot of benefit out of.”