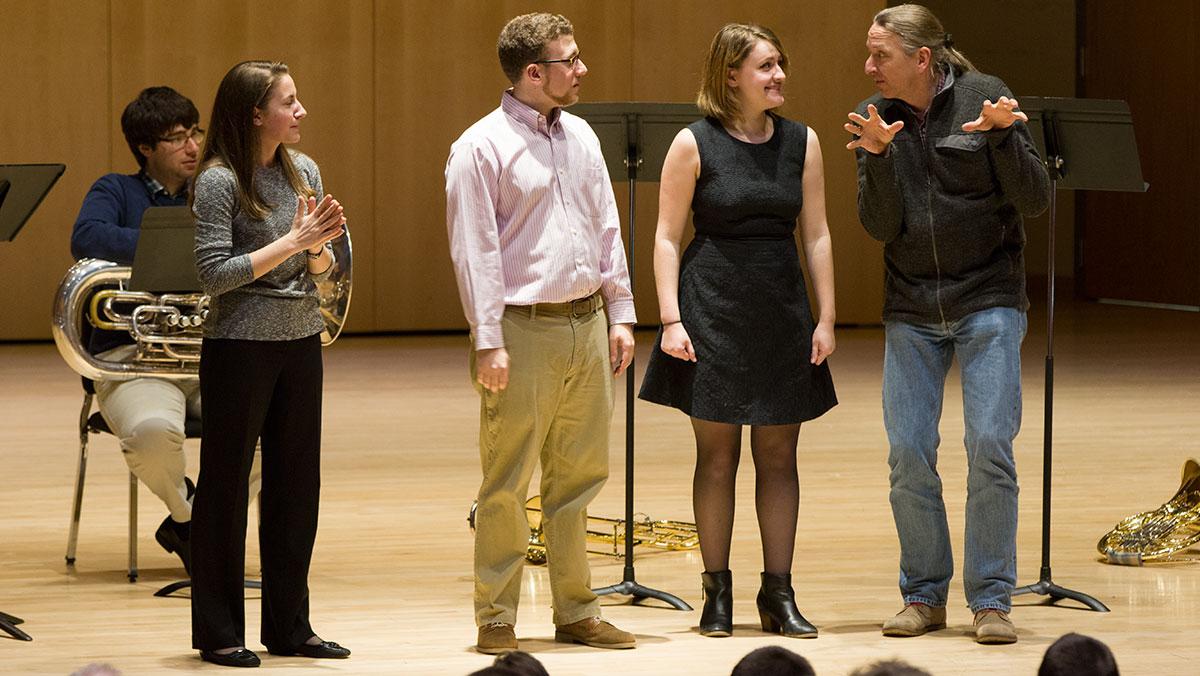 The first four rows of seats were filled as music students and spectators entered Ford Hall on April 4 to participate and observe a master class for music students who play brass instruments. The class was taught by professional musician Leonhard Paul of the well-known Austrian brass septet Mnozil Brass.

One of the reasons Mnozil Brass stands out is the band is entirely composed of brass instruments, including trumpet, flugelhorn, bass trumpet, schagerl trombone, alto trombone, tenor trombone and tuba. The group plays original compositions, classical favorites and popular hits. Mnozil Brass has been around since 1992 and started out in Vienna, Austria, but now plays more than 120 concerts worldwide every year.

The purpose of a master class is to have one’s performance analyzed and critiqued by a professional musician. In this case, the master class was targeted toward student brass groups consisting of around five members. About four groups signed up to participate.

Sophomore Jeremy Straus attended the master class along with the student quintet he is in, South Hill Brass. Straus is the group’s French horn player, and they performed the piece, “Golliwog’s Cakewalk,” written by Claude Debussy and arranged by Don Rose.

Before he took the stage, Straus said the group was excited to improve and “learn from some great musicians.”

“We’re taking chamber music as a class. Our coach asked us if we would like to perform tonight, and we agreed very quickly,” Straus said. “I wasn’t super familiar with the name at first, but we had seen their videos before.”

Paul frequently cracked jokes for the audience and taught the students in a comical yet informed way. He often commented on the group’s facial expressions and body language as it played.

“Did you see his face? Don’t show them!” Paul said to the audience jokingly after a group’s horn player grimaced at a mistake. “The audience can’t tell unless you tell them.”

Paul worked with groups on more than just their playing ability. With the first group to perform, Paul also worked on posture and the group’s stage entrance.

Paul also frequently made groups sing their parts instead of playing them on their instruments so group members had a better idea of what pitch they should be listening for.

As a result of Paul’s personality, the atmosphere was more relaxed than that of a typical performance, senior Ben Allen said. Paul’s frequent jokes made the audience and musicians alike break out in laughter.

To the brass quintet called add 5, Paul demonstrated his acting skills to inform them how the piece should sound, walking around the stage and making different facial expressions to the audience every time a note stood out.

“We’re like children in a fairy tale: We lost our parents, and we’re in a big dark room,” Paul said.

When the group began playing again, Paul acted out the scene he had described, stopping in place and making a scared face toward the audience every time the group landed on a staccato note to emphasize to the group and audience the importance of different musical stylings.

The members of add 5 include seniors Ben Allen, Matt Allen, Tori Boell, Kaitlyn DeHority and Lucas Davey. Though this was the members’ first time working with a member of Mnozil Brass, they had heard of the group before.

“We saw Mnozil two years ago at Lehigh University, and they showed us how to better connect with the audience through performance,” Ben Allen said.

Ben Allen also said add 5 likes the group because of its showmanship and the way it connects with the audience during and through performances.

“When we heard they were coming here, we wanted to play for them very badly,” Matt Allen said. “They are a fantastic world-renowned group.”

Boell said one of the reasons master classes are so important is that it is rare to get such an outside perspective on one’s performance.

“It’s crazy how different we sounded by the end,” Boell said.

Add 5 said there are many little details that can be improved that the group doesn’t pick up on during rehearsal but that professionals like Paul do.

“It was an incredibly enlightening experience,” Boell said. “It’s rare to see such an outside perspective.”