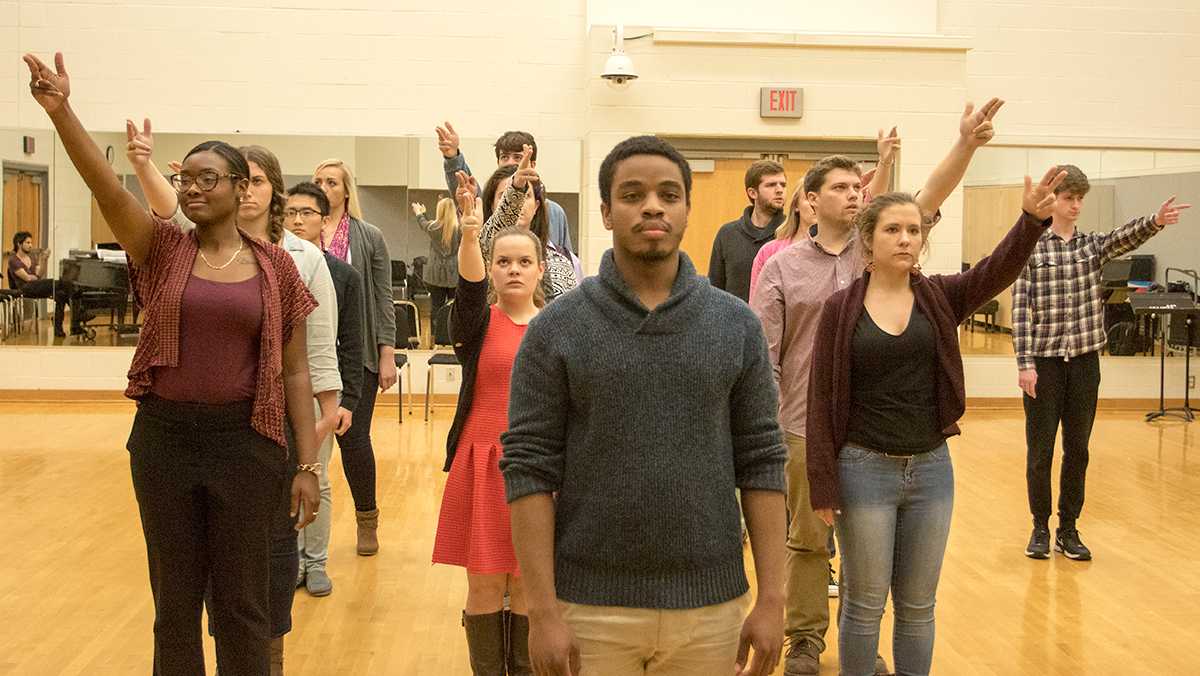 This semester, students in the Opera Workshop course are being challenged to put together a show introducing new American works from American composers that have not been recorded or performed.

Directed by Professor Erik Angerhofer and alumnus Zach James ’06, and with music directing by performance studies professor Blaise Bryski, the opera students are gearing up for their first performance at 7 p.m. Nov. 19 in Hockett Family Recital Hall in the James J. Whalen Center for Music. Bryski said the excerpts that will be performed are from several contemporary American composers, introducing new genres and setting higher standards for the students.

Students in the Roy H. Park School of Communications will be producing the live show as part of the television-radio course, Live Event TV Production. This will be the first live-streamed performance at Ithaca College. The Park course, taught by Professor Chrissy Guest, is comprised of 15 students. Five of the students, including junior Griffin Schultz, are spearheading the opera event.

“We are in charge of everything from the ground up,” Schultz said. “[The course] is testing us for prep work and also has us working with people outside the Park School. We need to be solving problems on the fly.”

Bryski said a difficulty the students face is learning the works while also creating their own interpretation and visualizing the scene in their minds.

“Imagine this is the 18th century and Mozart has just written a new opera. Everyone has to figure out how they’re going to perform it. Students have to figure out who their characters are and what the setting is. [This performance] will be the conception,” Bryski said.

James, a current opera singer and Broadway actor, organized the repertoire, which is inspired by his previous experiences working with contemporary opera.

“I’ve done a ton of new opera myself as a singer and theater student, so I was thinking about what I didn’t learn in school and wish I had because so much in the professional world I have had to piece songs together without the aid of a recording,” James said. “And because I have done so much new opera, I had access to a lot of composers who are working in all the biggest opera companies in the country.”

James said he is in constant contact with the composers, each of them wanting to share their ideas of how their works are being interpreted.

“[The composers] are all very curious. One composer emailed me this morning with all these thoughts,” he said. “Composers are really eager to be involved, and it’s almost painful for them to know that someone’s doing their music and they can’t hear it in the rehearsal process.”

Angerhofer said performing songs that have not been acted out before is a remarkable experience that affects all parties involved.

“I think for them, they must be really excited about being able to see what they’ve conceptualized up on its feet,” Angerhofer said. “It’s a spiral effect in that they write something, we go to work on it, they get to see it, they might get some new ideas and new thoughts, and it just takes from there.”

The variety of the opera also adds an air of intrigue. Angerhofer explained how each excerpt originated from different styles of composing, therefore resulting in a range of genres.

“Some of them are really focused on composing opera. Others of them have done more folk music,” Angerhofer said. “Some of them are electronic music. [The concert will be] a neat blend of genres.”

The Opera Workshop performance not only gives experience to the students producing the show, but also to the cast who will be performing in front of an audience with cameras nearby. James said he expects the concert to be an engaging show for both the cast and audience.

“It’s very difficult music, and it’s been a huge challenge for everyone involved,” James said. “Everyone’s had to rise to the occasion because it’s out of their comfort zone, and it will be out of the audience’s comfort zone.”