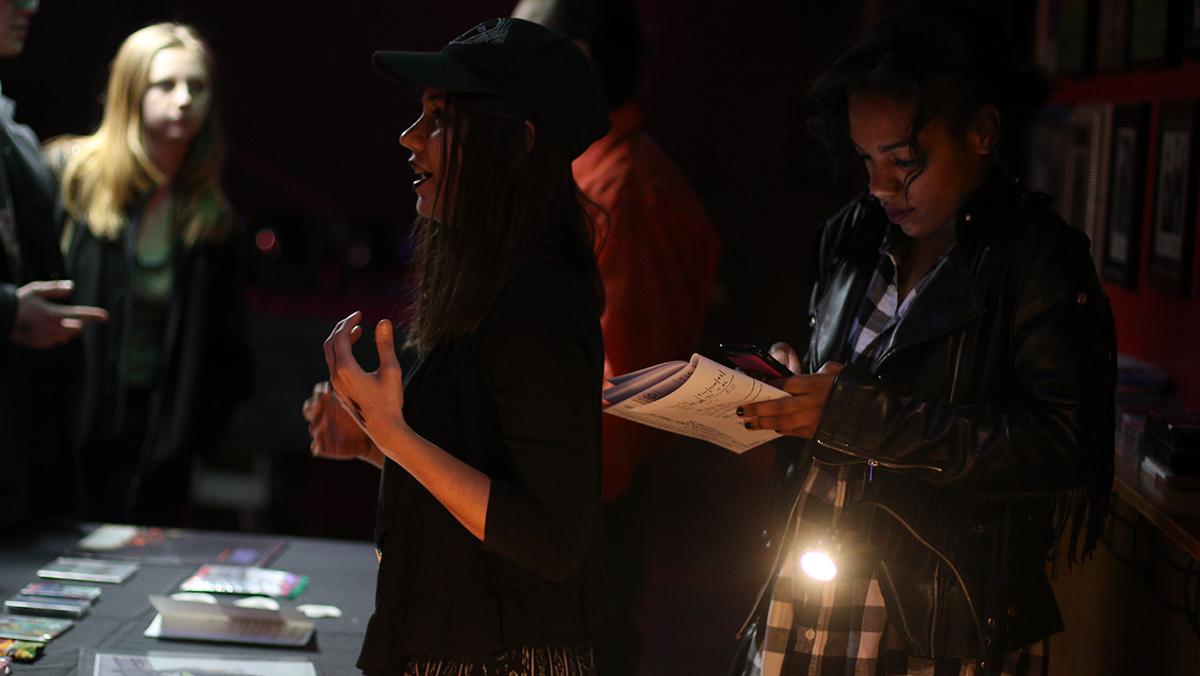 Sam Fuller/The Ithacan
From left, sophomores Elise Littlefield and Diamond Watt volunteer at an Ithaca Underground show on Feb. 26 for hip-hop groups Milo, Elucid and Ithaca local, Sammus. The performance at The Haunt, along with many other IU shows, allow Ithaca College students to get involved in the music scene in Ithaca.
By Olivia Riggio — Staff Writer
Published: March 8, 2017

Dim lights illuminate a stage, scattered with wires, amplifiers and instruments. An iPod plugged into the PA system plays music as artists and volunteers set up for a night of performances on Feb. 26. To the right of the door, students stand behind a folding table covered in artists’ colorful merchandise — T-shirts, CDs, records, pins. Intricately designed posters that announce upcoming shows — designed by Ithaca College junior Francesca Hodge — sit on the table.

As The Haunt slowly fills to roughly 80 people, a volunteer runs sound checks for the first band. Audience members approach the stage as Ithaca local “Sammus” begins her hip-hop set. Another volunteer with a camera snaps pictures and records videos. Sammus is followed by New York City rapper Elucid. Finally, the headliner, Milo, takes the stage.

More goes into planning a concert than just booking artists. The 165 volunteers at Ithaca Underground, a local nonprofit organization showcasing independent musicians, include Ithaca College students, Cornell University students, high school students and locals. The group, founded in 2007, advertises itself as an organization that provides a radically inclusive environment fostering exploration of artistic style for bands. The group categorizes most of its shows as hardcore, punk, hip-hop, noise-rock or experimental, and it holds over 60 events a year featuring national and local bands of all genres. All of the events are organized and run by volunteers.

IU’s volunteer coordinator, Kate Holden, said students who give their time to the organization gain valuable experiences such as learning about new types of music, sharing their talents and getting to engage with artists.

To the volunteers, the organization functions as more than an off-campus extracurricular activity: It fosters a welcoming community for students with interests in alternative forms of art.

“Ithaca Underground provides access to lessons [and] volunteer experience,” junior Claire McClusky said. “Volunteering for IU is very satisfying in a way I don’t see at IC organizations. You are providing good times, education and supportive environments to people in Ithaca’s local community.”

Junior Kai Nealis, former photo logistics lead for IU, said he connected with the Cornell University band Shull right off the bat at his first show.

“I met them and just had really hit it off,” Nealis said. “I didn’t know that there were people in town that were into that kind of fusion of avant-garde music and jazz and indie-rock.”

Nealis is currently studying abroad in Bolivia and passed his role as photo logistics lead down to sophomore Ariella Ranz. She said one of her favorite parts about her job is getting to interact with national and local band members.

“One of the reasons I like to do photo and video is you can go up to the bands and ask them, ‘Hey, which songs do you want recorded?’ and you can start talking to them,” Ranz said. “And they’re just so open and willing to talk to you. … They think that we’re cool because we’re volunteering.”

Hodge, the arts coordinator, said she first got involved with IU as a videographer during her sophomore year. She said she had tried getting involved in on-campus organizations but was not very invested in any of the clubs she tried joining. Her roommate, McClusky, who was already a volunteer, recommended she try shooting videos for a show.

Hodge said that though photography was not her forte, she soon found her way into art when she designed a poster for her friend’s band that was a part of IU. Her friend showed the poster to IU’s president, Bubba Crumrine. Crumrine reached out to Hodge and asked her to design a poster for an upcoming show.

“I had never had someone validate my art in, like, an ‘I want to put you out there’ way,” she said.

Holden said the volunteer committees that make up IU meet on separate days at the Tompkins County Workers’ Center. 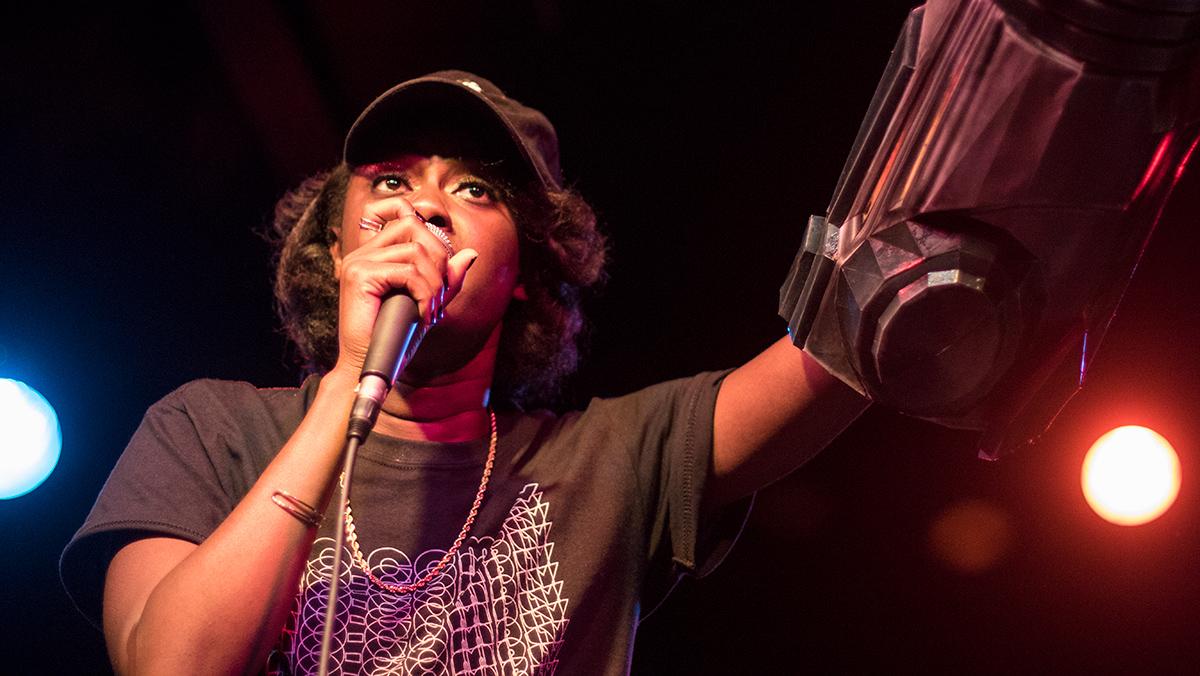 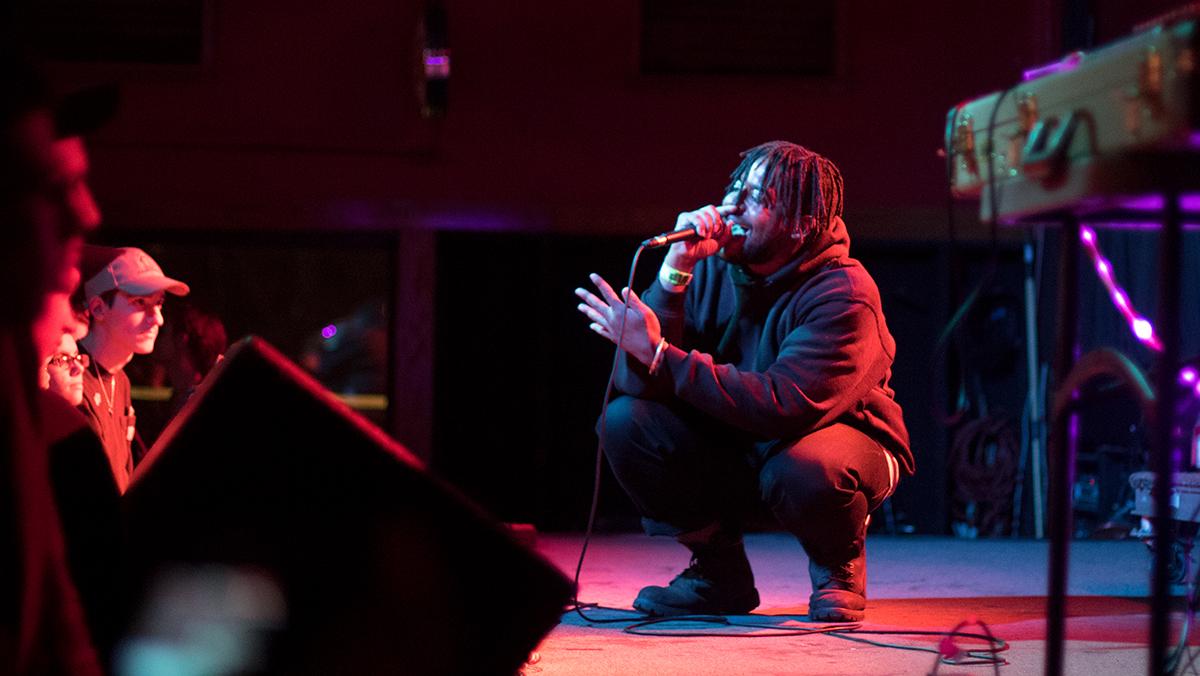 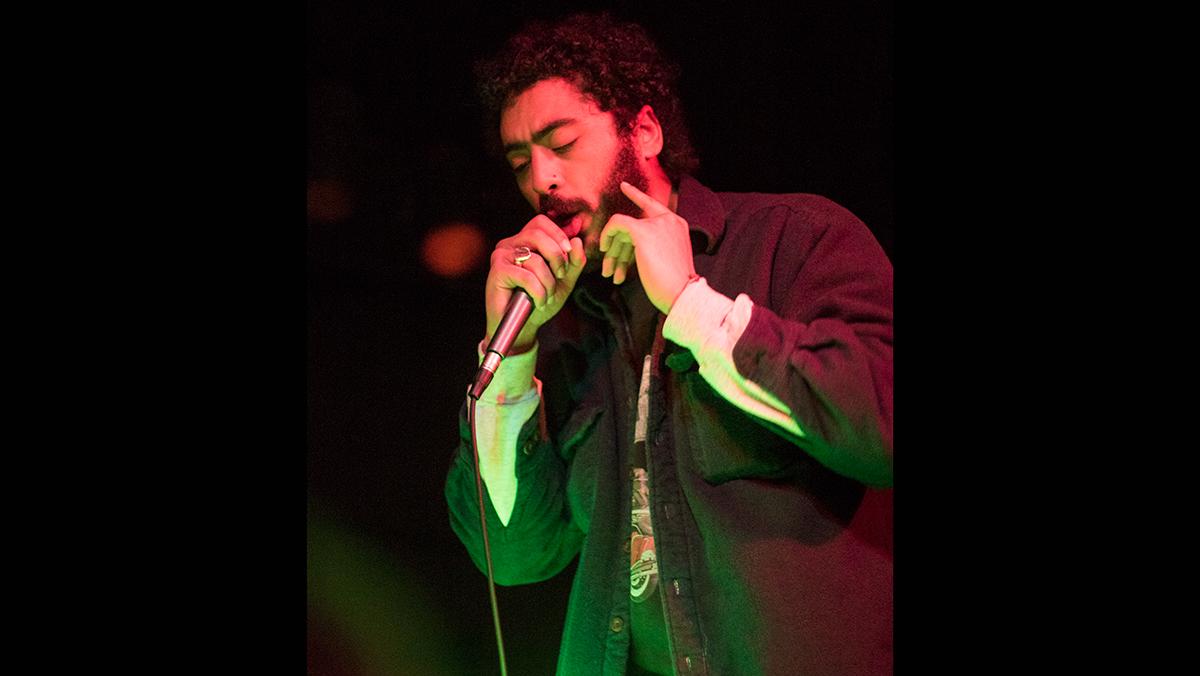 DuBois now works as a production runner at College Street Music Hall, a music venue in New Haven, Connecticut. She said her experiences at IU prepared her for the future she had always dreamed of — working in the music industry.

She began at IU as a general volunteer, working door and merch, and she even tried photography. She said she fell in love with the accepting community and made herself available to help out at as many shows as possible. She said Crumrine noticed her dedication and gave her the opportunity to manage shows.

“It’s a way to extend out into the great music scene Ithaca has to offer,” she said. “It also enhances skills people may be majoring in. Some examples would be music or photography.”

Whereas on-campus organizations often operate hierarchically, Hodge said, she enjoyed how essential every volunteer’s job is at Ithaca Underground.

“I like that I have a role at IU that’s valued,” she said. “I feel like everyone who volunteers with Ithaca Underground is going to have a role.”

DuBois did not only spread the word about Ithaca Underground to Ranz. She said she expressed her gratitude for everything the organization taught her by spreading the word to those who she thought would get as much out of it as she did.

“I am still having trouble putting into words how thankful I am for IU and everyone I met there and for them really making me feel like I had a place in the broader sense of the community,” DuBois said.

Ranz said she appreciates the opportunities IU has given her to connect with people she may not have otherwise met.

“Everyone’s so accepting, but also so weird,” Ranz said. “I feel like it’s my place.”