Students will take part in staged reading of ‘The Darfur Compromised’ 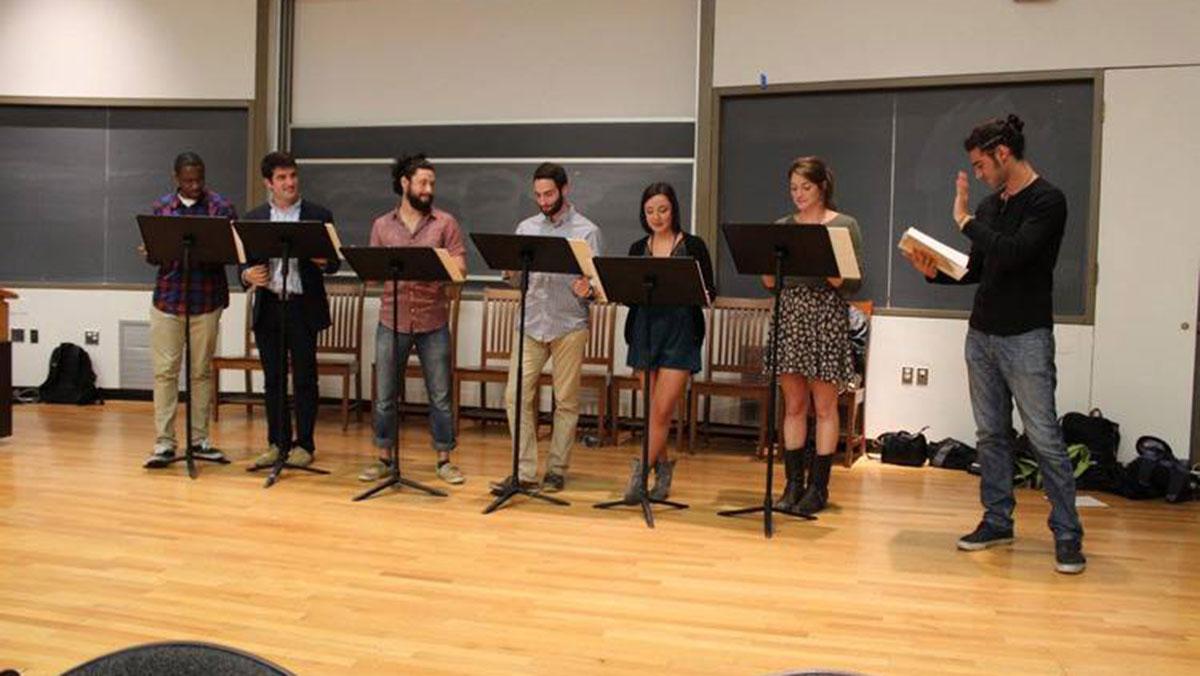 Courtesy of Trevor Stankiewicz
'The Darfur Compromised' was previously read at two staged reading this spring, and will move Off-Broadway in the fall.
By Evin R. Billington — Senior Writer
Published: September 22, 2015

Last February, Trevor Stankiewicz, then a senior at Cornell University, was called into his history professor’s office. He was greeted with a stack of books and films about the genocide in Darfur, Sudan, a conflict that has been raging since 2003 and has claimed the lives of an estimated 300,000 people and displaced more than 450,000 Sudanese. His professor proposed that Stankiewicz write a play about the conflict. Stankiewicz accepted and got to work.

After previewing the play twice in preview readings last spring in Ithaca, Stankiewicz’s play, “The Darfur Compromised,” will be read once more Sept. 27 at the Beverly J. Martin Elementary School Library on West Buffalo Street before moving to Cherry Lane Theatre in New York City in November.

Though the subject matter could easily lend itself to tragedy, Stankiewicz said the play is more of a satire.

“We talk a lot about the United Nations and their responsibility to kind of protect people,” Stankiewicz said. “Because of one reason or another, there were obstacles that allowed this genocide to go on. And if you think about that, the absurdity of it, there’s humor in that, I think. If you talk about it in that light, it kind of resonates more.”

The play follows a college student who learns of the genocide in Darfur through his professor in the mid-2000s, when Western activism about the conflict was at its peak. The play shifts between the fictional student learning about the conflict and depictions of real decisions major political players, like former President George W. Bush and Sudanese President Omar al-Bashir, made during the height of the genocide.

Stankiewicz said he knew little about the conflict before beginning his research. He enlisted his roommate, Rudy Gerson, also a senior at Cornell at the time, to direct and collaborate.

“A lot of our press releases say that our play is about the genocide in Darfur,” Gerson said. “But I think of it more as a play about American activism surrounding the genocide in Darfur. Really, it’s a critical reflection of our own roles in this international conflict — our own government organizations, our own response. It’s about activism in general.”

Each night, Stankiewicz said he would stay up late to read the books his professor gave him and leave annotations outside of Gerson’s room for him to read in the morning.

“Our process is like a yin and yang. When he would pitch something, I’d be able to bring a different perspective on it,” Gerson said. “Trevor ultimately wrote the play, but it was a collaborative process of editing and discussing.”

They said it was important to them that the play not be too heavy-handed or depressing. The satiric tone is designed to make the subject matter better resonate, Gerson said.

“With this play, it gave me an opportunity to use theater, which is — as an art form — is something that excites me and energizes me and gives me fuel to do this activism work, but in a way that’s exciting and happy and you’re allowed to laugh, but you’re also allowed to cry, and so the merging of those two spheres for me made me excited to do this,” Gerson said.

Ithaca College senior Jelani Pitcher will play multiple roles, including Omar al–Bashir, Ahmed Adam and Mukesh Kapila, in the Sept. 27 reading. He agreed that the humor in the play was what made it great. It’s difficult to sit through a piece that is all doom and gloom, so by lightening the subject matter in the right places, the audience will listen to the overall message more, he said.

“There’s humor in it, but it’s also very serious,” Pitcher said. “That’s one thing I love about it, once you get the audience laughing, you also get them listening. That shows humanity in a lot of ways.”

Half of all the proceeds from performances are going to Operation Broken Silence, a nonprofit that raises money for peace in Sudan. Stankiewicz said he hopes audience members will see themselves in the Darfuri people in the play.

“I think that things that happen far away tend to feel disconnected, so by using testimonials from texts, actual words that were said by these other fellow human beings, I hope that is a powerful connection that people can make and realize that there are people in need and we have a responsibility to help them out,” he said.