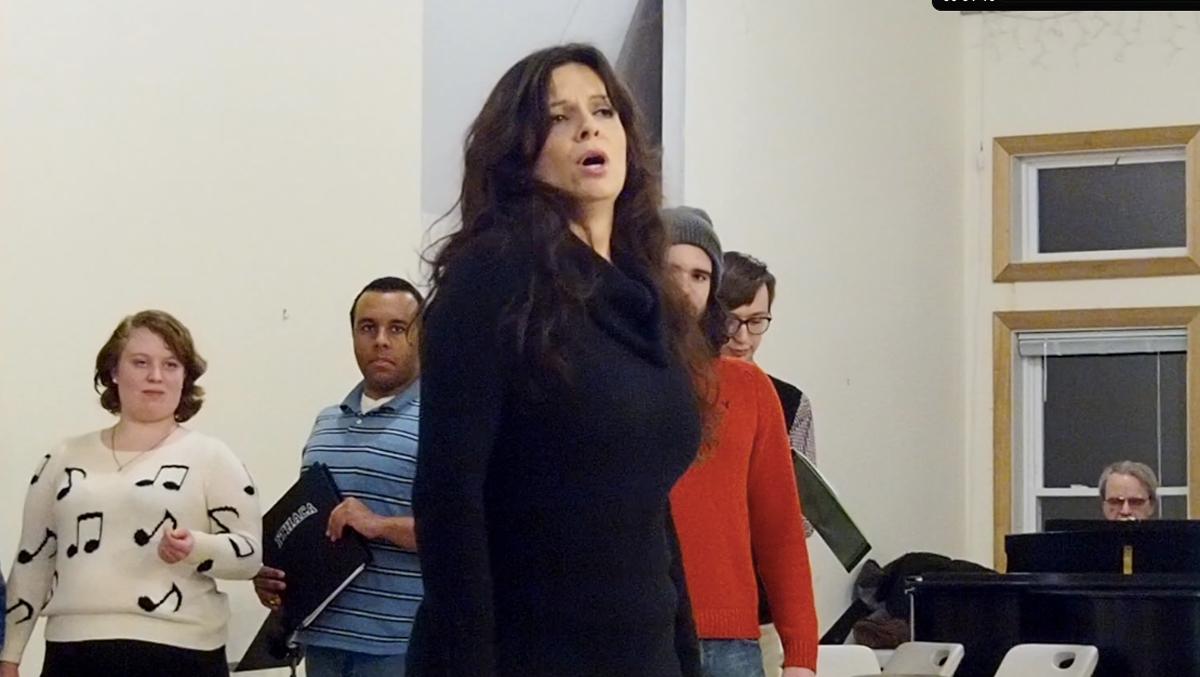 Courtesy of Daniel Carney
Dawn Pierce, assistant professor in the Department of Music Performance, stars as the titular character Carmen at the Hangar Theatre. Students have worked with Opera Ithaca to help produce the opera.
By Silas White — Staff Writer
Published: March 7, 2018

Opera Ithaca, the Ithaca area’s professional Opera Company, has been working with students this season on their production of “Carmen,” an opera about an alluring Roma woman and the soldier that falls in love with her.

Opera Ithaca Community Ambassadors, or OICA, is a student club started by Dawn Pierce, assistant professor in the Department of Music Performance, and a handful of students she knew would be interested in working with Opera Ithaca. Pierce is on the board of Opera Ithaca and stars as the titular character Carmen. The opera is written by French composer George Bizet.

Senior Jessica Voutsinas, OICA’s vice president of community outreach, said she used to dislike opera after seeing an episode of the TV show “Arthur” when she was little, where the character Binky was made fun of for liking opera.

“I kept that opinion for a long time, but I was very invested in choirs for most of my life,” she said. “One time, we went on a tour to Italy, and they got us tickets to see ‘La Traviata’ performed in a church. It was just stunning. … The sound itself just overwhelmed me. That’s when I fell in love.”

Voutsinas said “Carmen” involves themes of domestic abuse and violence against women, and she said Opera Ithaca is performing a version of the play with modernized values.

“Without giving anything anyway … the temptation when you read the opera is to romanticize the idea of him getting retribution when his advances have been spurred and Carmen as the villain for rejecting these advances,” Voutsinas said.

Voutsinas said the set designers decided to subvert this idea by using lighting and set design to have the audience question the narrative of the opera. OICA also worked with the Advocacy Center of Tompkins County to make sure the domestic abuse issues in the play were presented in a way that is sensitive and well-informed.

Other students in OICA, such as sophomore Daniel Carney and graduate student Maria Rabbia, slowly developed an interest in opera through their interest in music. Carney is a self-described “musical theater junkie,” while Rabbia said she became involved with opera as a piano accompanist.

Other members of OICA include junior Adam Tarpey and senior Julia Gershkoff. At first, Pierce said that she started OICA to help out with smaller tasks, like ushering visiting artists, but that eventually, the organization grew to take on larger responsibilities, like fundraising.

For the production of “Carmen,” Voutsinas’ students were able to receive a grant from the School of Music and the Center of Civic Engagement to help fund the pit orchestra. OICA also helped finance the orchestra by organizing a silent auction for Opera Ithaca’s New Year’s Eve Gala, featuring a performance of Gilbert and Sullivan’s “Pirates of Penzance.”

“We organized gift baskets for the silent auction, as well as a few bigger items like a golfing trip,” Carney said.

In addition, Voutsinas said she and the other students organized a crowdfunding campaign on GoFundMe and a corporate fundraiser through Chipotle, where customers were given the option to donate half of the proceeds of their purchases to Opera Ithaca.

Carney, who is OICA’s vice president of media and marketing, said joining OICA is a good experience for students who want to participate in a real-world production.

“I think it’s a great experience for students because they can participate in productions and get a feel for what the real world is like,” Carney said. “You may only have one or two weeks to learn the material, and you have to come in and be ready to work.”

“It’s basically a guild,” Carney said. “We help with costumes and sets. We get people involved; we try to get younger audiences more involved and interested, and also the students at Ithaca college interested in opera.”

In addition to the main performance of “Carmen,” Opera Ithaca will also be putting on a performance of an original play called “Carmencita” for younger audiences. Pierce said the company puts on a smaller, kid-friendly production once a season since many operas contain content not suitable for children.

“The plot is that this group of high school students is putting on ‘Carmen,’ and it’s more about the high school drama, but it’s a way to introduce kids to the music and the art form,” Pierce said.

Performances are at the Hangar Theatre from March 9 to 11.

Water sloshes backstage at the Hangar Theatre as actors’ and crew members’ hurried feet move across the flooded floor. In the lobby, the audience waits to be seated in the shabby seats of the theater. Small puddles accumulate in all corners of the room. Lisa Bushlow, executive director of the Hangar Theatre, said water leakage…

Review: ‘Next to Normal’ brings psychological drama to Hangar Theatre