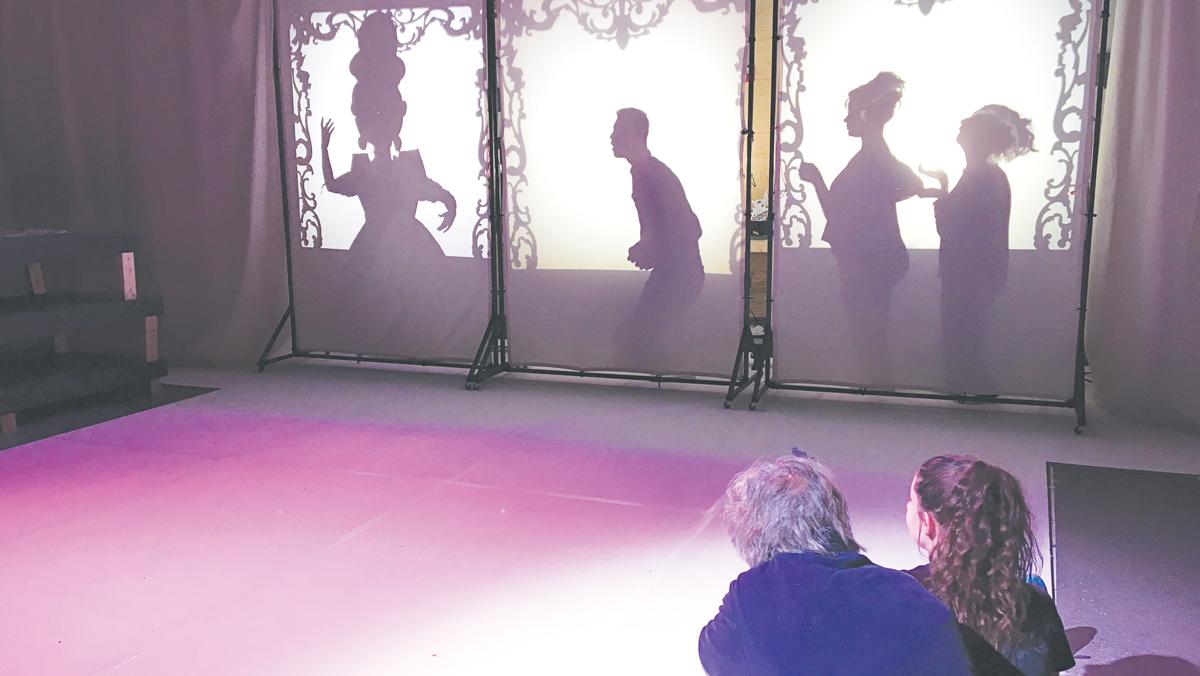 Courtesy of The Cherry Arts
Sophomore Lucia Vecchio, who plays the role of Greta in “The Snow Queen,” and Jeffrey Guyton, cast member, watch a shadow puppetry scene during a rehearsal at The Cherry Arts.
By Brontë Cook — Staff Writer
Published: December 12, 2017

The lights come up. A young Greta stands center stage, lamenting her “Red Shoe Blues” as she prepares a winding journey to rescue her best friend. As the echoes of her lament weave through the space, a forgotten realm of childlike magic is brought to life as the audience accompanies Greta on her journey into a fairy–tale world.

Adapted from the Hans Christian Andersen classic that inspired Disney’s “Frozen,” local not-for-profit theater company The Cherry Arts Inc. presents “The Snow Queen,” a tale of Greta, a young girl who embarks on a journey to save her best friend, Kai, from an evil queen. The Cherry Arts Inc. is working in collaboration with students from the Ithaca College Department of Theatre Arts and locals in the community.

“The Snow Queen” debuted at The Cherry Arts in the winter of 2016. The debut production was adapted and directed by Samuel Buggeln, artistic director of The Cherry Arts, and included an original script, two original songs and hand puppetry.

This year, The Cherry Arts added hand and shadow puppetry designs based on the work of local fantasy illustrator Rachel Terwilliger. This performance also includes changes to the script; new original songs composed by Paul Leschen, a New York City–based composer; and lyrics by Lyrae Van Clief-Stefanon, local poet and associate professor in the Department of English at Cornell University.

Sophomore Lucia Vecchio, who plays the role of Greta, said she got involved in the production after she volunteered to attend a reading of the script over the summer. Vecchio said the script reading was aimed to help the production team make changes and adaptations to the script before they began casting the show.

“I was here over the summer, so I went in to do the reading,” Vecchio said. “I got an email a couple months later asking if I wanted to come in and audition for Greta.”

Vecchio said playing the role of Greta has been both inspiring and challenging because of the complexity of the character.

“The challenge has been how to make her young and youthful and courageous and bright without making her weak,” she said. “I’ve had a great time diving into a character that has so much innocence and so much awe for the whole world.”

Vecchio is acting in the production alongside three peers from the college, including sophomore Megan Schmidt and juniors Josh Altenburg and Joshua Wilde.

Wilde, who plays the role of Kai, said “The Snow Queen” has been a positive experience for him because he was able to help build his own character.

“I’ve never been a part of a show that I’ve helped create,” Wilde said. “We’ve had a lot of freedom to explore each of the characters.”

Watching her lyrics come to life on stage was a particularly moving experience, Van Clief-Stefanon said.

“There was a point where Greta was lamenting missing her friend, and I was so wrapped up in the narrative, in the action on stage — I actually forgot I had written what she was singing,” Clief-Stefanon said.

Jennifer Herzog, lecturer in the Department of Theatre Arts and associate artistic director for The Cherry Arts, said the new original music sets this year’s show apart from last year’s because of the unconventional style of the music itself.

“Last year, it was more of a play with music — this year it’s definitely a musical,” Herzog said. “For people who aren’t into conventional musical theater, the music in this piece is going to impress them because it’s not your typical old-school musical–theater type of style.”

While the show is based on a fairy tale, it can captivate a variety of audiences because of the complexity of the characters and the nature of their journey, Herzog said.

“It’s unique in that it’s not a children’s theater show — it’s appropriate for kids, but it was designed for adults,” she said.

Wilde said he believes the production is inviting because it encourages people of all ages to root for the characters as they embark on their journey.

“I’m part of the belief system that every fairy tale is tailored for everybody,” Wilde said. “Something that we focus on is to invite the audience into the story and welcome them into that journey.”

“The Snow Queen” will be performed at The Cherry Artspace, The Cherry Arts’ new venue. The building was completed during the summer of 2017, and the first season in the space began this fall. The theater includes a thrust stage, which is designed to have the audience located on three sides of the performance.

“We will always continue to go back to the Department of Theater Arts to work with Ithaca College students whenever given the opportunity,” she said.

Herzog also said this connection to the college helps with The Cherry’s mission to give local artists a space to create and develop their work.

“We have so many professional artists that call Ithaca home,” she said. “Part of the reason we founded The Cherry was to give those artists a space to call their own.”