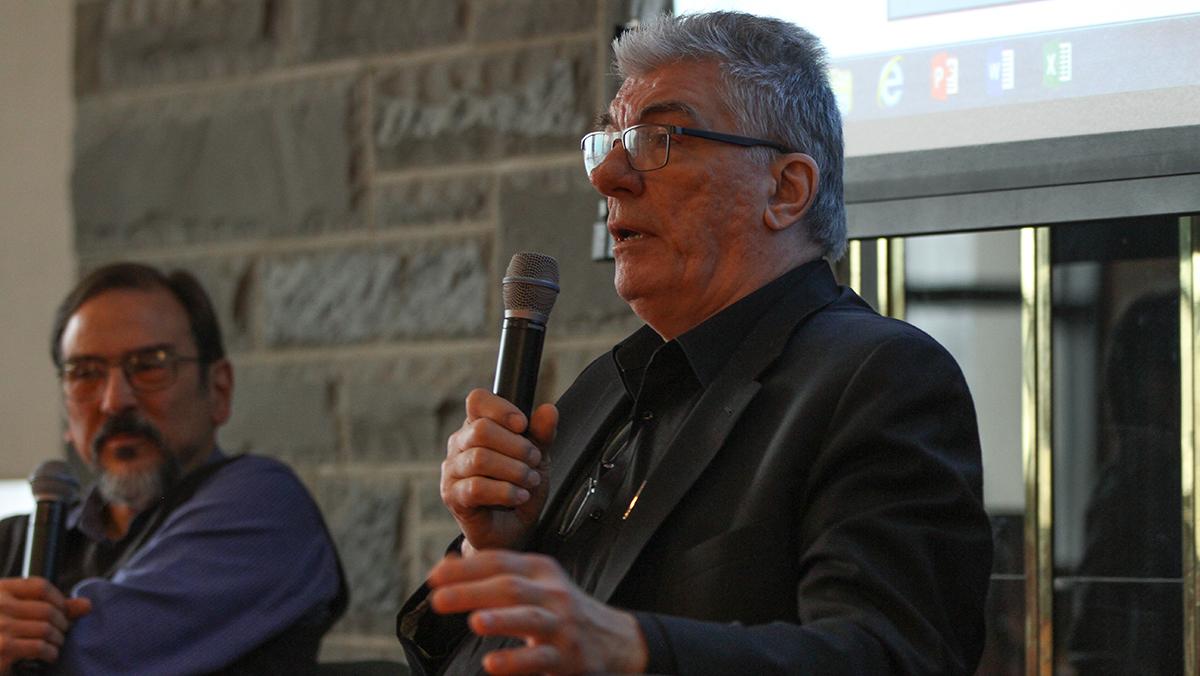 Two men are wrestling in an office surrounded by desks and filing cabinets. A bystander in the doorway gets kicked in the chest by one of the two men. He goes flying backward and smacks into a wall, right as his boss walks past. His boss turns around to say, “Stay alive, men,” and walks away.

This is not normal office behavior, nor is this a normal office. In the Marvel Comics office, the wrestling men are comic book writers and the boss is Marvel’s then-president, Stan Lee. This story is just one of many told by former Marvel Comics author Roger Stern and previous Marvel Editor–in-Chief Jim Shooter, in a full Clarke Lounge on March 25.

Stern and Shooter talked about their time working at Marvel and answered questions from attendees during the speech, which was the keynote of the 42nd Ithacon, Ithaca’s annual comic book convention. Both men were hired by Marvel in 1976, and they have remained friends for over 30 years. They discussed their inspiration behind storylines, shared anecdotes about working in the Marvel office and contributed their opinions on the current state of Marvel comic books and movie franchises.

Shooter told a story about getting a phone call from comedian John Belushi after Marvel published a crossover comic with Spider-Man and “Saturday Night Live.” Shooter said the phone call resulted in Shooter and Stern getting invited to the wrap party for Belushi’s movie “Animal House.”

An audience member wanted to know which Marvel superheroes they like most, but both Shooter and Stern said whichever hero they happen to be writing is their favorite.

During the event, the duo discussed their opinions on how Marvel movie plotlines have been adapted from the comics. Shooter said that whenever a storyline is going between different mediums, there has to be an adaptation.

“Some things that will work on the printed page just don’t play well in the live action and vice versa,” Shooter said.

Stern said he really enjoys the movies because they have the vibe of the old comics. When he worked at the company, Stern was the author of comic classics like “Spider-Man,” “Doctor Strange” and “Ghost Rider.” He also said the best thing about the Marvel movies is that special effects have caught up to the point where actions and characters look believable.

“It might not be the characters exactly as I wrote them, but they feel like those characters,” Stern said.

Bill Turner, a founder of Ithacon and member of the Comic Book Club of Ithaca since 1975, said Shooter came to the convention around seven years ago, so this year, they paired Shooter and Stern to talk together.

“Since we had both [Stern] and [Shooter] and they have a long back history together, it was interesting to hear a lot of their stories,” Turner said.

Freshman Andy Yzaguirre said she has been reading comic books for around four years. She said learning about the creative process behind the making of comic books was interesting.

“You see Marvel as this big company, but you forget that there are people working inside of it,” Yzaguirre said.

Faster than a speeding bullet, more powerful than a locomotive, stronger than a crashing tidal wave — superheroes are blasting into town.