Dim lights above a small stage bounce off dark red walls, bathing the interior of The Haunt in a dull glow. The hardwood floor in front of the stage is steadily filling with audience members, many of whom are wearing Ithaca College shirts, sweatshirts and jackets. Conversation and music playing from the venue’s loudspeakers fill the air as the crowd waits for the Ithaca College Showcase to begin.

On Nov. 10, the Ithaca College Showcase provided singers and bands from the college a local platform to perform. The artists that played were Kyra Skye, The Bad News!, Olive & The Pitz, The Troy Boys and South Hill Revival. Students from the college were also involved in working behind the scenes, as the bands were curated by senior Morgan DeShields-McClure and the show mixed by juniors Andrew Nolish and Nicholas Young.

“It was a great turnout,” DeShields-McClure said. “Two hundred people from around Ithaca and out of town came to support the IC showcase, which was not only IC performers, but IC audio majors who set up, ran the soundboard and mixed the show. We also had students from Park film the behind-the-scene happenings.”

Sophomore Kyra Skye was first to appear onstage, accompanied by sophomore drummer Leah Byck. With the stage lights reflecting off of her silver sequined leggings, she performed five alternative songs from her debut album “Summer Nights,” switching between two guitars and singing with powerful, belted vocals.

The Bad News! performed next, with sophomores Jacob Mollot, on guitar and vocals, Bennett Maupin, on bass and vocals, and Eric Myers, on drums. The band played approximately 10 songs, jumping around onstage to match the punk energy of their music. During the second song, two members of the audience jumped into the middle of the floor and began crashing into each other, flailing their limbs to the beat of the music. This grew to a five-person mosh pit near the front of the stage, including members of Olive & The Pitz. After the dancing died down several songs later, Mollot asked the audience to start moshing again at the end of the set. Although no moshing was revived, several audience members began to dance to the music.

Olive & The Pitz followed, with much cheering from the audience. They performed five indie-pop songs, with members of the audience singing along to parts of the choruses. At the end of their set, several audience members threw their bras onstage, caught by the lead singer and songwriter, junior Olivia Riggio.

The Troy Boys followed, and at their appearance, the area near the stage became crowded as people danced and sang along to their opening cover of “Twist and Shout” by The Beatles. They then followed with seven original songs inspired by 1960s rock. During one of their songs, “March of the Cursed,” the members stood in a line and marched to the beat during an instrumental break.

The last act of the night was South Hill Revival. The current lineup is sophomore Owen Walsh on guitar and seniors David Vinder, on lead vocals and rhythm guitar, Colby Daboul, on bass, and Matt Gurbarg, on drums, recording, mixing, mastering and designing album art. They played several rock revival songs, including three originals from their South Hill Revival EP.

South Hill Revival began when Vinder, Daboul and Gurbarg met at their freshman orientation. Originally, the lineup included Dylan Radigan ’17 on guitar, but after he graduated, they recruited Walsh. Taking inspiration from Led Zeppelin, Lynyrd Skynyrd and White Denim, South Hill Revival takes its name from the rock revival genre the band is passionate about.

“Once we wanted to start gigging, we got right to it and hit the ground running,” Daboul said.

The band’s South Hill Revival EP can be found on southhillrevival.bandcamp.com. 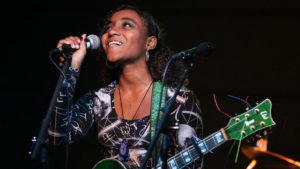 Skye is using her talents as a guitarist, singer and songwriter to begin a career as a solo artist, playing songs from her album “Summer Nights” in shows around Ithaca. While working as the lead sound engineer for Ithaca Underground, Skye joined the band Izzy True as bass guitarist.

After touring with Izzy True in the summer of 2017, Skye released her debut album “Summer Nights” in August 2017. Skye wrote, performed and produced the album by herself in her basement. Skye performed most of the songs by herself, with Byck playing drums on two tracks.

Skye said she is influenced by artists like Kehlani and Glass Animals but tries not to limit herself to a single genre.

“I really like just a lot of different types of music, and I think trying to define your music can be limiting,” Skye said. “I’d say I’m like alternative or indie–something because that’s super broad. But I kind of like it that way, because the more vague it is, the more you get to experiment and mess around with stuff instead of feeling constricted to a genre.”

“Summer Nights” is available on iTunes, GooglePlay, SoundCloud and Spotify. 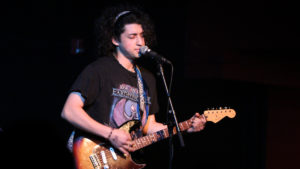 The Bad News! began when Mollot and Maupin became roommates and found they both were influenced by punk, new wave and alternative artists. They then joined with drummer Meyers to form a noise rock trio.

“I remember being really little and watching videos of The Who blowing up their instruments,” Maupin said. “I wondered why they did that kind of thing all the time until I started playing live, and I realized it’s true catharsis.”

The band’s EP can be found at xbadxnewsx.bandcamp.com/album/hello-morning-ep. 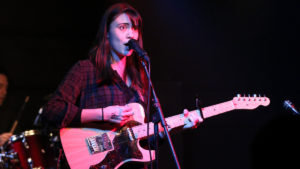 Junior Olivia Riggio is the lead singer of “Olive and the Pitz.” Elias Olsen/The Ithacan

Originally a solo songwriter, Riggio joined with friends Kyle Cooke on guitar, Ross Greenberg on bass and Nick Iacobelli on drums to form the band Olive & The Pitz.

Although the band has only been together for two years, their origin dates back to when Riggio and Cooke met at Indian Hills High School in Oakland, New Jersey, where they both were students. Cooke noticed Riggio performing at a high school coffeehouse and recognized her talent, but it wasn’t until after another year that they began to work together.

Last year, Riggio asked Cooke to play with her in a band. They then invited Greenberg and Iacobelli, who both had gone to the same high school and been involved in the local music scene.

While Olive & The Pitz classify themselves as “reptile mermaid indie folksy pop rock,” each member brings a different musical influence. Riggio has a classically trained voice and takes inspiration from Laura Stevenson. Cooke said he tries to incorporate punk and hard rock, while Greenberg has a background in emo.

Olive & The Pitz released their EP “Landlocked” in 2016 after having been a band for only several months.

“I was like, ‘Look, we’ve been recording music for years. I have some equipment at home. Let’s make this happen,’” Cooke said.

Cooke mixed and mastered the album himself.

“Landlocked” is available on iTunes, SoundCloud and Spotify. Olive & The Pitz can be contacted through the band’s Facebook page or at olivepitz.bandcamp.com. 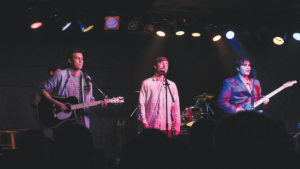 From left, seniors Jot Sandhu, Michael Pickhardt and Andrew Hazerjian from The Troy Boys perform on stage. The Troy Boys consist of eight seniors who all lived on the same floor of West Tower their freshman year. Elias Olsen/The Ithacan

From living on the same floor in the West Tower residence hall to playing onstage, The Troy Boys are using a wide variety of instruments to bring music from the 1960s to modern–day Ithaca.

The eight members met each other during their first year at the college, when they all lived on the same floor of West Tower.

“Right off the bat, within the first couple weeks of that freshman year, we all discovered that we had passion for music of the 1960s and 1970s,” Hazerjian said.

The majority of members did not play instruments, which postponed them playing music. The band did not officially form until Fall 2016, when they moved into a house on Troy Road and learned to play instruments.

Although members had begun to rehearse together privately, the band’s first performance occurred when Thomas invited friends to the house the members shared on Troy Road and the band played several songs. Met with positive feedback, The Troy Boys began covering bands like The Beatles, The Monkees and The Turtles at open invitation house parties. They also played at this year’s Porchfest.

The Troy Boys are hoping to release a three–song EP by January and release an album before they graduate in May.

Olivia Riggio is a Staff Writer for the Ithacan