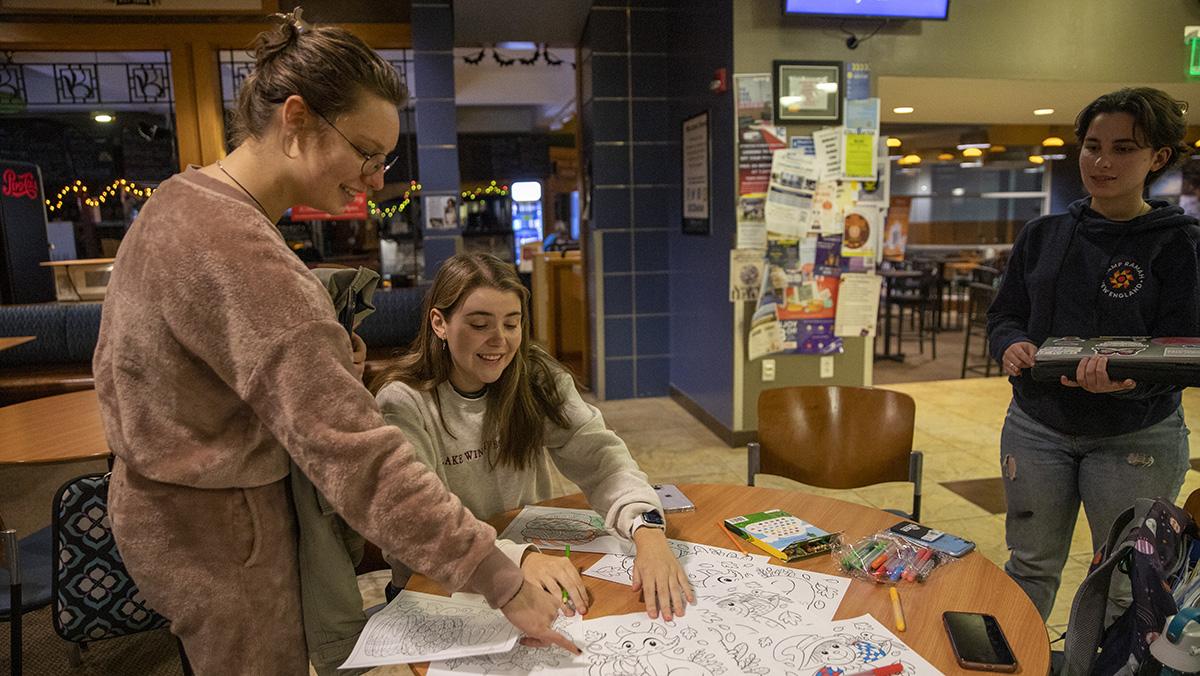 A calm settled over IC Square as members of Theatre Lab and passersby whose attention had been grabbed quietly chatted over their fall-themed coloring pages on the night of Oct. 24 at “Theatre Lab in IC Square.”

Theatre Lab is a no-cut theater club formed by students in 2018. The club typically produces two shows each semester: one 24-hour show, which auditions have been held for but the production has not yet been announced, and one full-length musical. Past productions include “Shrek the Musical,” “Grease” and “The Addams Family.” Now, in addition to Theatre Lab’s main programming, the club is looking to expand its outreach with additional non-theater related activities, like karaoke, coloring pages and Jackbox Party Pack video games. These events, held weekly on Mondays at 8 p.m. in IC Square, are intended to be engaging for all members of the college community, regardless of prior involvement in theater.

Sophomore Jamie Correll, production manager for Theatre Lab, said the events are intended to introduce more people to the organization.

“Because also a lot of clubs on campus will do their own specific events but then don’t really do a lot of outside stuff,” Correll said. “So we were like, OK, we could, you know, do these.”

Funding for the weekly events during Fall 2022 comes from the Office of Student Engagement (OSE) as part of an incentive for clubs on campus to promote the importance of getting involved in on-campus activities. IC Tone Cold, an all-gender-inclusive a cappella group, put on similar events in Spring 2022, also as a result of increased funding being provided to the group for doing so.

Senior Shosh Cohen, event coordinator for Theatre Lab, said the club saw the offer from OSE as an opportunity to focus on what Theatre Lab’s core values are as an organization.

“Theatre Lab’s purpose as a club is making theater accessible to all Ithaca College students, regardless of experience,” Cohen said. “This opportunity … came about as we were revisiting our values and constitution as a club during the re-recognition process. Given that we value accessibility and that the opportunity presented itself around the same time, it seemed like a no-brainer that we should do these events each week.”

In addition to more casual, non-theater related events, the organization is also hoping to do more workshops and theater tech training events in the future, like lighting workshops, as is written on their event page on IC Engage.

Sophomore Hannah Goodrich, music director of Theatre Lab, said she hoped the event will bring enjoyment to the campus community due to the club’s focus on different weekly activities.

“I think the big highlight of it is that it’s different every week,” Goodrich said. “I think it’s fun to do karaoke, games — this week we’re doing coloring. It’s also just a good place to meet people and connect with friends you already have. But it’s fun that we do something different every week.”

The events are optional for club members, which has consequently resulted in low attendance. Despite this, members of the Theatre Lab executive board seem hopeful that more people will show up in the coming weeks due to increased social media outreach and a great turnout at the first event.

“We’re off to a little bit of a rough start, but we’re getting there,” Correll said. “I think the first one went pretty well. Last week, it sounded like … it was pretty similar to tonight, where there weren’t a lot of people, but I think the first one had a pretty good turnout. … We’re making slow progress.”

Correll said she still sees these events as being a way to not only get outside students acquainted with the club, but also to bring in new members who will hopefully be involved in their shows in the future.

“I just want people to be able to … enjoy their time and want to come back to the next [event] and then want to, you know, come to our shows or possibly even participate in the shows, because it’s also a good way for us to hopefully get a little publicity for our club,” Correll said.

Theatre Lab is putting on their full-length musical of the Fall 2022 semester, “Matilda the Musical,” at 7 p.m. Nov. 4 and 5 in Presser Hall in the James J. Whalen Center for Music.