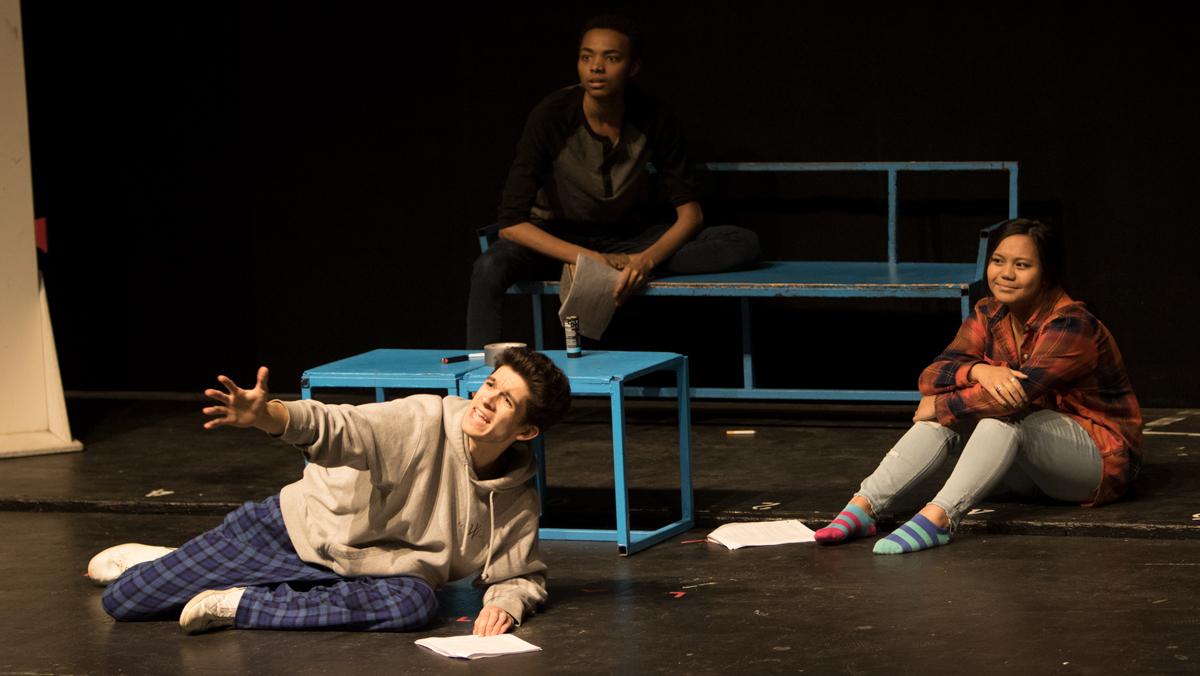 At first glance, the students onstage in Dillingham’s Hoerner Theatre on April 14 looked like they were in the middle of a rehearsal. The house lights remained at half power as the actors read their lines, relying on their voices rather than microphones. Their scripts were stapled together or contained in binders, held in hands or resting on music stands. Despite this apparent lack of formality, or perhaps because of it, the people who filled the first half of the theater audibly gasped, laughed and shouted in response to the actions on stage. After one of the actors called out the words, “end of play,” the audience erupted in a roar of applause.

This was the scene during each performance of the Ithaca College Theatre Arts’ New Play Incubator. The New Play Incubator was a competition among seven staged readings of original plays written by students in the Department of Theatre Arts. The plays competed for the Golden Egg first place trophy and the Silver Egg second place trophy, which were both built by Theater Production and Design majors, junior Brock Viering and sophomore Michael Hayes. The trophies were designed in the image of an egg to reference an egg incubator.

The plays were written by current theater arts students and alumni who had taken the playwriting class taught by Saviana Stanescu Condeescu, assistant professor in the Department of Theatre Arts and producer for the New Play Incubator. Besides the seven playwrights, 22 students participated as directors, stage managers and actors.

The plays ran from 6–7:45 p.m., with each play lasting between 10 and 15 minutes. Between readings, a stage crew walked onstage to rearrange music stands, a white prop door, tables and blue-painted benches.

Senior Lucas Dixon won the Golden Egg trophy and $300 prize for his play, “Technicolor,” about a couple living in a black–and–white world who discovered a colored sock in their laundry. In his acceptance speech, he thanked those who helped him workshop the play last semester and the actors who played his characters.

The Silver Egg trophy and $200 prize went to Katie McGeorge ’16 for her play “The Binding of April,” which focused on a woman who must choose between having an abortion and losing her job. McGeorge climbed onstage from her seat in the audience to receive her trophy. In response to Condeescu’s request for McGeorge to deliver a speech, McGeorge said, “I love eggs,” into the microphone before climbing back down off the stage. 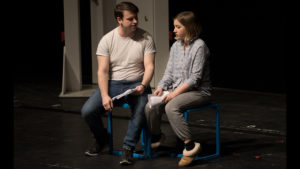 Juniors Keenan Buckly and Hannah Anderson played the father and Nikki in the play “Her Part” at the New Play Incubator. (Maxine Hansford/ The Ithacan)

Condeescu said that in November she called for submissions for 10-minute plays to be presented as staged readings. Previously, students taking playwriting presented their original work during PlayFEST, a production of staged readings held in Studio 1 in Dillingham at the end of each fall semester. Condeescu said the New Play Incubator was the first presentation of new student plays in a competition format and performed in a theater rather than a studio. She also said instead of students in the class volunteering as actors and directors, as in PlayFEST, actors were cast during Main Stage auditions and students from all majors in the department participated in the production.

“Our department has an amazing tradition of producing plays that have been done on Broadway … but I think it’s important to have an emphasis on the voices that come from here, that we incubate here, of playwriting students and alumni,” Condeescu said.

Condeescu said she received over 30 script submissions. She asked Aoise Stratford, assistant professor in the Department of Performing and Media Arts at Cornell University, and playwright Anne Hamilton to read the submissions. The two each made a list of their top 10 favorites out of the 30 submissions, and the top seven finalists were then selected from the two lists to be performed.

The playwrights were told that their plays made it to the final production the week of March 18. Condeescu said the timeline for the production was quick; each play rehearsed only three or four times over the course of one week, and the first run-through of the performance was two hours before the actual production.

Before announcing the winners, Lin delivered a speech. He said it was an honor to watch everyone’s work and cited the book “A First-Rate Madness: Uncovering the Links Between Leadership and Mental Illness” by Nassir Ghaemi, saying that all the artists had a “first–rate madness” that allowed them to be leaders. He also said he did not like having to decide which play would win, and warned the artists against taking one person’s opinion too seriously.

“The sooner you guys can say, ‘Who cares what that guy thinks,’ be it praise or critique, the sooner you are to really join the ranks,” Lin said.

After the awards ceremony, Dixon said he was surprised that he won because he has never been focused on writing.

“I came in here as a stage manager, really technical, and now I just won an award for being creative and artistic and writing,” Dixon said. “I’ve never been good at papers or short stories, but plays, I love to write.”

Condeescu said she hopes the New Play Incubator will become an annual event, and she wants to continue to have two theater production and design students design the trophies. She said the most important thing for a playwright and director is to have an audience that appreciates their work.

“Maybe the most important thing is to see your play read in front of an audience,” Condeescu said after the readings. “That’s the moment when the playwrights can really see what works, what doesn’t and, eventually, maybe make other revisions.