Theatre group to bring play on identities to Ithaca College 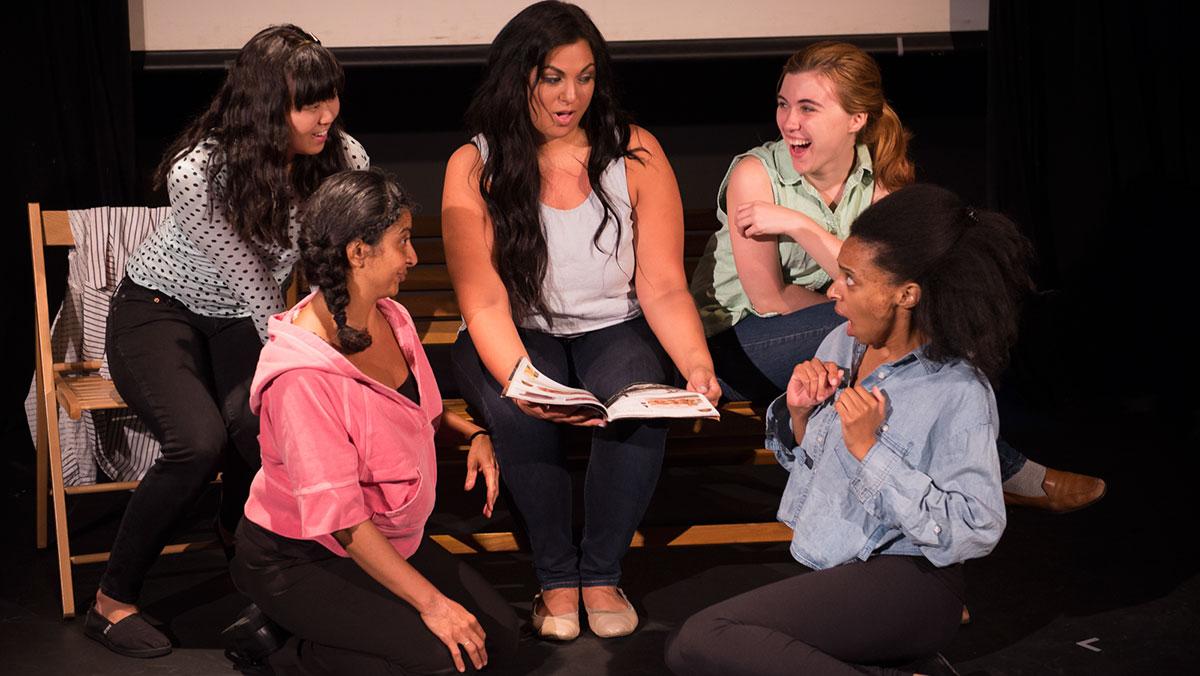 The lighting falls dark as some of the characters walk onstage. The scene’s backdrop is a factory, spewing out little boxes intended to label each character. Everyone is put into a box with a different label on it ranging from gender to sexual orientation and sexual identity.

After the characters are divided, Emerson comes onstage — a character who identifies as ‘they’ — and the factory doesn’t know how to function. The factory eventually breaks down because it cannot label something considered atypical to society. The scene symbolizes how people of all kinds are put into certain categories by societal expectations.

The performance, directed by Rachel Sullivan and Maggie Keenan-Bolger, explores the lives of eight women and trans people who struggle with issues such as sexuality, gender, hook-up culture, objectification and more.

Sullivan said “The Birds and the Bees: Unabridged” was created when she and Keenan-Bolger came together in graduate school and surveyed over 2,000 graduate school students all across the United States via social media. They asked students which themes they felt were most relevant to female sexuality and found that sexual assault; lesbian, gay, bisexual and transgender issues; aging; and health were some of the most relevant topics to students.

The performance is guided by a cast of 16 performers ages 20 to 70 and was originally unscripted. According to the Honest Accomplice Theater website, the team doesn’t begin its process with a script, but instead with ideas, opinions and experiences of the people in the cast.

“We touch on a lot of different themes, all based around what the community said was most important to them,” Sullivan said.

After the performance was set in motion, Sullivan and Keenan-Bolger came together to form Honest Accomplice Theater, an NYC-run, nonprofit organization with a mission to “generate dialogue and stimulate change by focusing on topics that are often silenced, seen as shameful, or portrayed as one-dimensional, specifically through the lens of the women and trans experience.”

Keenan-Bolger said it’s crucial to discuss these topics because people who are dealing with these problems might not know how to initiate a discussion about them.

Sullivan said she hopes college students relate to some of the characters and that viewers have meaningful discussions and think proactively about the issues after the performance.

“We hope that they either realize there are many ways of being sexual or see that we’re cheering them on,” Sullivan said.

Tiffani Ziemann, the Title IX coordinator at the college, said that since April is sexual assault awareness month and that the performance goes along well with the Peggy Ryan Williams Difficult Dialogue Symposium, this was an appropriate time for the performance.

“This objective material through art gives permission to discuss sexual assault openly as opposed to personal experiences,” she said.

Holly Sansom, who plays Alex in “The Birds and the Bees: Unabridged,” said the opportunity to perform is one of the aspects she enjoys most about the show.

“I am a differently sized person, so just being able to be a part of this is helping to present different people onstage,” she said. “The company offers a very different group of people, so I appreciate the effort to make what may seem atypical a regularity.”

Sullivan said their organization wants to emphasize how society often dichotomizes social issues into black and white, even though sexuality is a more fluid topic.

“Our country was founded on extremes — prude or slut — but what happens if you want to be those things? What happens to the people who are not even on that spectrum?” Sullivan said.
“There’s a power problem — a woman or trans person who knows their sexuality can be threatening — so it’s easier for society to make it taboo, or not talk about it.”

Cast member Ashleigh Awusie said due to the serious topics within the show, she has formed close bonds with her fellow actors.

“We’re kind of like a family because no topic is off the market for discussion,” Awusie said. “To me, the show says that we cannot violate a human being just because we don’t understand them.”

Free tickets for the performance will be available at 5:30 p.m. and 8 p.m. the day of the performance in the Earl McCarroll Studio Theatre in the Dillingham Center. Tickets also include a talk-back panel from 7 to 7:30 p.m. Seating is first-come, first-serve with only 50 seats available.