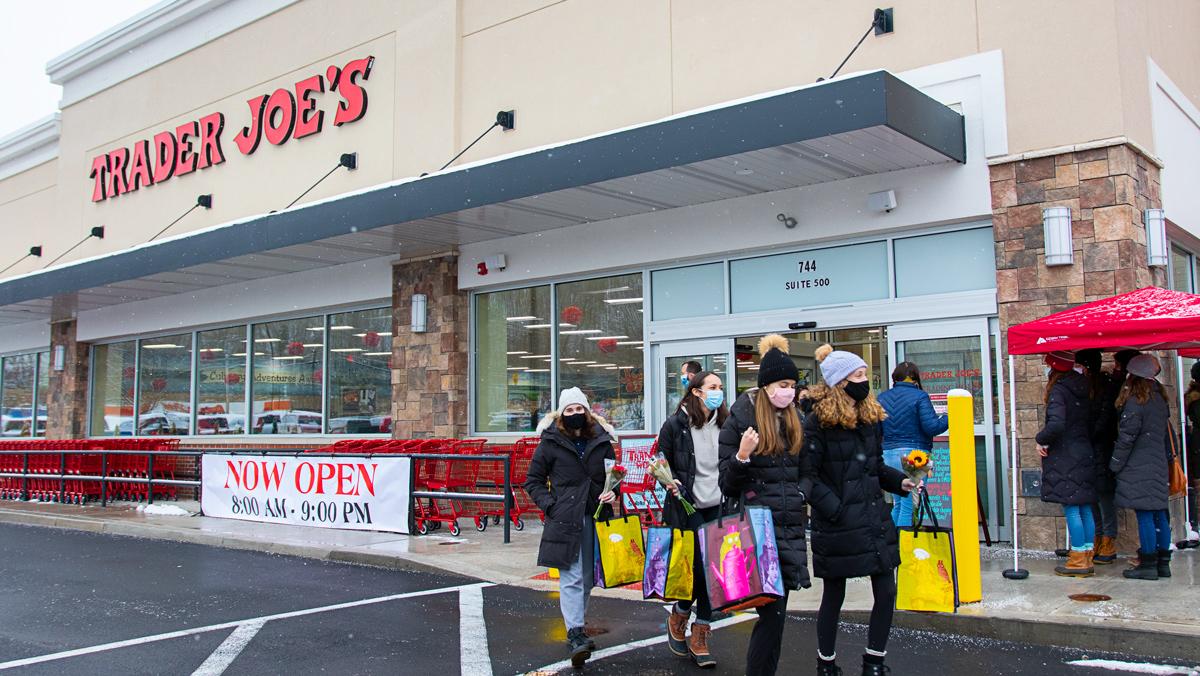 The words Ithacans have been waiting to hear: Trader Joe’s has docked ship in Ithaca.

On Feb. 19, shoppers lined up outside the store at 744 S. Meadow St. to scour the newly installed, tightly packed shelves. When Samantha Maione, a store leader called a Mate, arrived for her shift at 6:45 a.m., she said she saw customers already waiting in anticipation. A line of approximately 100 people had formed before the store’s opening, stretching to the TJ Maxx a few storefronts down.

Word of a Trader Joe’s in Ithaca surfaced in March 2020 when the Ithaca Voice reported that a location in Ithaca was in its early stages of development. Locals have expressed their desire for the California-based, nautical-themed grocery chain to open a store in Ithaca, even forming social media groups like Ithaca Needs A Trader Joe’s, now renamed Ithaca HAS a Trader Joe’s. The store’s opening was confirmed Jan. 26, making it the 29th store in New York state and the 515th in the country. Previously, the closest Trader Joe’s was in Syracuse, approximately a one-hour drive away from Ithaca.

Ithaca College senior Natalie Smith said she arrived at Trader Joe’s on opening day around noon, where she sought out nut butters and dried mango in the bustling store. As someone who does not eat gluten, dairy or refined sugars — something she posts about on her health food Instagram, @nataliesnaturalfood — Smith said she is excited to have a Trader Joe’s to buy ingredients for the recipes she posts on her account.

“Their products are unique, and you can’t get them anywhere else,” Smith said. “Every time I go to Trader Joe’s, the workers are just so nice and helpful.”

Grand openings are special, Maione said, so to celebrate the opening of a new store, certain products around the store were comped for lucky shoppers, and the first 1,000 customers also received a free reusable Trader Joe’s bag. Maione said that although she does not have the exact number of people that shopped on opening day, the bags were gone by the time the store closed. The Ithaca location’s hours are 8 a.m. to 9 p.m. every day except Sundays, 9 a.m. to 9 p.m.

Trader Joe’s has generated a fandom-like following among shoppers based on its individualized products and shopping experience. From limited release experimental products to staples like 19-cent bananas, grocery shopping at the store is tailored to seem less like a chore and more like a curated, customer-first experience.

Chanel Courant ’20 graduated in December and still lives in Ithaca, so she applied to be part of the Crew. As a Crew member, Courant said, she works at the cash register, unpacks daily deliveries and stocks shelves.

Senior Jules Baumann is also part of the Ithaca Trader Joe’s Crew, though this isn’t the first time she has worked at the store. From May to August 2020, Baumann worked at the Trader Joe’s Denville, New Jersey, location, where along with being a crew member, she created shelf tags for products and designed signs in chalk for outside the store. Inside each store is a painted mural, and the Ithaca location features images of Ithaca attractions like Buttermilk Falls, Cayuga Lake and even East and West Towers.

Employees like Courant and Baumann have been preparing the store since the beginning of January. Courant said the majority of her training was in customer service and working the register. Courant said she and other employees would take turns pretending to shop and running through the register, both to get acquainted with checking items out and to practice striking up natural conversations with a customer.

“I’ve worked in retail before, but I’ve never worked a job where there was so much of a focus on customer interaction and just making sure that the customers feel really welcomed,“ Courant said.

Courant said that when she was hired, her hourly pay was $16 per hour. Because of the pandemic, the hourly rate has gone up $4 because of Trader Joe’s hazard, or “thank you,” pay. Wages were initially increased $2 per hour at the start of the pandemic, with another $2 per hour added in February 2021. Courant also said that when she and her co-workers receive the COVID-19 vaccine, they will be paid for two paid hours per dose. Grocery workers in New York state are eligible for vaccine doses as essential workers in phase 1b, the group the state is currently working in.

Along with its customer and employee satisfaction, Trader Joe’s is known for its relatively low prices compared to other healthy food stores like Whole Foods. To keep its prices low, Trader Joe’s buys products directly from suppliers and sells them under a private, self-titled label, according to the Trader Joe’s website. The result is high-quality items for cheaper prices.

In a 2018 study by Consumers’ Checkbook, Trader Joe’s prices were overall 16% lower than the average prices at surveyed area stores. Compared to Target and Walmart, two options for groceries in Ithaca, Trader Joe’s prices were 12% lower than Target’s but 5% percent higher than Walmart’s. Wegmans also sells items under its own brand, some of which are cheaper than popular brands. Some Trader Joe’s items are also cheaper than similar Wegmans-brand products.

Baumann, who lives off campus, said she plans to switch her grocery shopping to Trader Joe’s from Wegmans — a go-to for many college students — because she likes the options and pricing of Trader Joe’s better. As an employee, she also receives a 20% discount. Baumann said she is excited and motivated to cook because of the store’s healthy food options.

“Our store makes it so accessible, between all of their frozen meal options, and those are enough to give you ideas for what you can make even using their fresh stuff,” she said. “I think that students in general are going to be really excited just to have a Trader Joe’s.”

Affordability is a relative term. Sophomore Bianca Sessegolo said that because she is paying for all her current expenses, namely groceries and rent, she does not find Trader Joe’s products within her price range. She said she spends approximately $100 on groceries per month, half of a cost she splits with her roommate. They buy most of their groceries at Price Chopper, the Dollar Tree or Walmart, she said. Other popular lower-priced grocery stores in Ithaca are Aldi and Tops.

Sessegolo takes the Tompkins Consolidated Area Transit bus from the stop close to her house to the shopping center where Walmart and Trader Joe’s are, a route she finds accessible though sometimes challenging. When shopping for food, she said she often must compromise healthy options for cheaper ones.

“I do care a lot about the food that I eat, but what happens in the end, it just comes out too expensive,” she said. “There were certain things that we just couldn’t maintain, so we just had to start opting for whatever was cheaper.”

Other community members will not be shopping at the store. Monica Lewis, a two-year resident of Ithaca and associate dean for alumni affairs and development in the College of Arts and Sciences at Cornell University, said she will stick to her usual rotation of buying groceries from Wegmans, GreenStar Co-op and the Ithaca Farmers Market.

Lewis said she was skeptical that Trader Joe’s would come to Ithaca because of the economic toll the pandemic took on grocery stores. Locally, GreenStar was hit particularly hard as a result of the pandemic. The store said in December 2020 that for the past six months, it had experienced an average loss of $55,000 per week.

Lewis said that instead, she would go to Trader Joe’s for its flowers and specialty, dessert or seasonal items. Before she moved to Ithaca, Lewis and her family lived in St. Louis, Missouri, where she, her husband and her eldest daughter frequented the store.

“There’s a consistent high quality to their products and a novelty factor that actually hits the right mark,” she said.

Prism lights and little bites return to The Commons