Traveling the world with colorful clothes 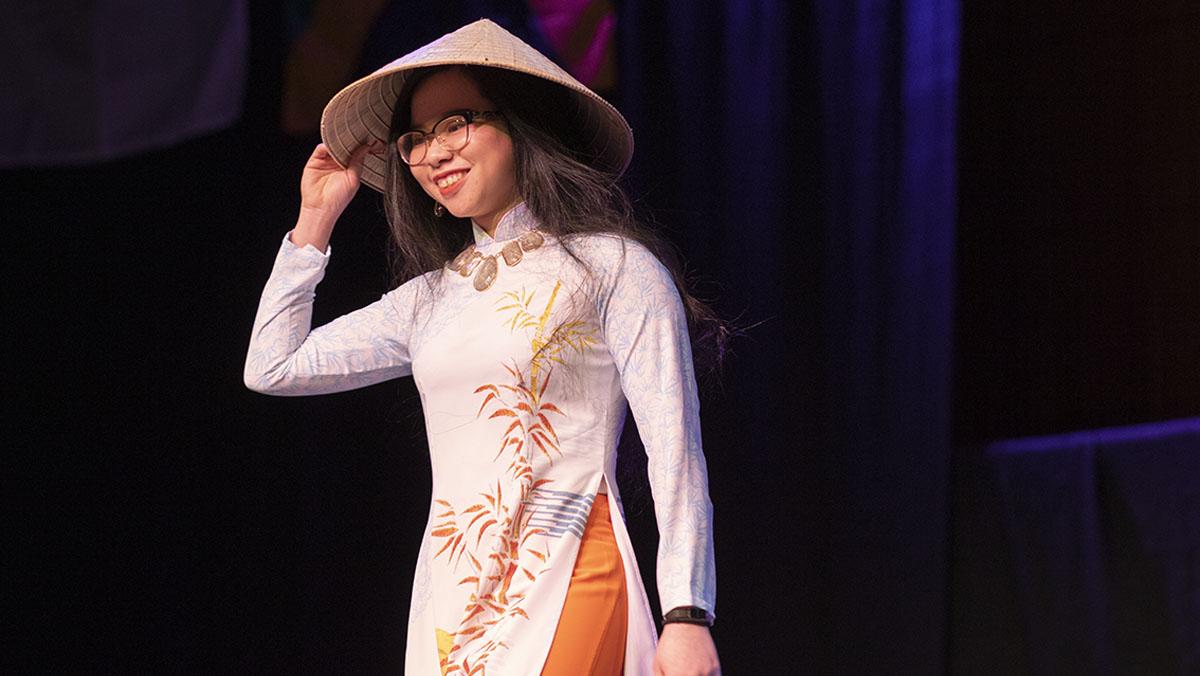 Emily Silver/The Ithacan
Senior Vy Trinh struts on the catwalk at Interfashional Night. The event is hosted by the Ithaca College International Club (ICIC) and was held Feb. 27.
By Avery Alexander
Published: March 5, 2020

The national flags of Spain, Brazil, Korea, Colombia and other countries hung from the ceiling of the Emerson Suites as students filed through the doors. A catwalk stood at the far end of the room, and as the lights dimmed, the crowd applauded, ready for this year’s Interfashional Night to begin.

Interfashional Night is an annual event and has been happening for more than 20 years. It is hosted by the Ithaca College International Club (ICIC), and this year it was held Feb. 27. The purpose of the show is to bring attention to international students on campus, said ICIC president Giulia Villanueva, a senior international student from Paraguay. Every year, the fashion show sports a theme that plays on that intention. This year’s theme was “Home-coming.” Previous years’ themes included “My Culture Is Not A Costume” and “Colors of the World.”

“We decided to call [the event] ‘Home-coming’ because we’re all away from home right now,” Villanueva said. “We’re so far away from home. Some people are close, and some are far. So I want them to have a feeling of bringing their culture to IC … as well as representing their home.”

There were 130 international students enrolled at Ithaca College in Fall 2019, according to the college’s 2019–20 Facts in Brief.

Student models represented multiple countries during the show, including Spain, Mexico, Colombia and The Gambia. Besides the colorful array of outfits, some models also demonstrated a performance art from their country. This year, the performances included a traditional Chinese dance and a Jamaican steel drum performance.

Freshman Isabella Orrego was the first model to walk at the event. Orrego is from Colombia. She said that although she is not an official member of ICIC yet, she wanted to take the opportunity to represent her country on the stage.

“[The club] told us over winter break that they were doing this, so I went home and tried to see which dress was the most appropriate kind,” Orrego said. “I feel that the biggest preparation was just looking for which part of the country I wanted to represent. … I couldn’t find the dress I wanted because [the sellers] were not going to sell it to me. So I had to build [my garments] like my grandmother did.”

This issue of locating clothes for the show is not exclusive to Orrego. Careful preparation is also needed to bring everything together for the fashion show, Villanueva said, along with the difficulty of finding clothes for the event. Villanueva said that in the past, she has only been able to locate the clothes she needed in Paraguay and could not access them in the United States.

“Usually when you have these types of big events, you reserve [the Emerson Suites] almost a year ahead, and we prepped for months before,” Villanueva said. “We prepped by contacting performers [and] models over the break [and] telling them, ‘You’re home right now, probably on vacation. If you are, make sure to bring clothes from back home.’ Because when they’re here, it’s a little harder to … have it shipped or [to buy the] actual clothes.”

Villanueva also said that even with so much planning ahead of the event, it can be hard to organize everything in time. She said it can be difficult to find people who are interested in modeling because it is something many people are uncomfortable doing.

“Some people are a little afraid to go on stage,” Villanueva said. “They hear the word ‘modeling’ and they think, ‘I’m going to be using designer clothes.’ I’m like, ‘No, you don’t need to wear high heels for this. You just have to be comfortable.’ … They choose the song they want from their country or from wherever they prefer. … It’s all about [being comfortable].”

While the event is hosted by ICIC, the fashion show draws its audience from all over the campus community. Freshman AnnaJo Lubasi is not an international student but said she came to the event to support Orrego. Lubasi also said that because of her own family’s origins, she was drawn to the event.

“I don’t really know a ton about what we’re about to watch,” Lubasi said as she and the other audience members waited for the fashion show to begin. “I am excited to see the whole international community on campus because my dad is actually from Zambia. … I have a whole bunch of family that still lives in Africa.”

Senior Julia O’Handley said she has attended Interfashional Night since her sophomore year. She said she admires the models and performers who volunteer for the event.

“I just like to support everyone,” O’Handley said. “I would never get up there and model, so I think it’s really cool and brave that they’re all doing that.”

Senior Colten Lavery has modeled for the event in the past but did not this year. He said Interfashional Night is a place where he can show his full support for his fellow international students even if he is not on stage with them.

“I have a lot of friends who do this, and I’ve done it in the past,” Lavery said. “I’m technically an international student myself. I am from Canada. Not that far, but that is how I was able to know everyone.”

Villanueva said she hopes Interfashional Night and ICIC itself will continue to grow in the coming years. She said that because this is her last year at the college, she was happy to see everyone who was involved excited about the show.

“Something I want to always say is that people hear ‘International Club,’ … [and] they don’t want to sign up because they think, ‘I’m not international,” Villanueva said. “But that’s the whole point. … We have some models that are from the U.S. but have backgrounds from Spain. … We want people [to know that] everyone’s international, in a way.”