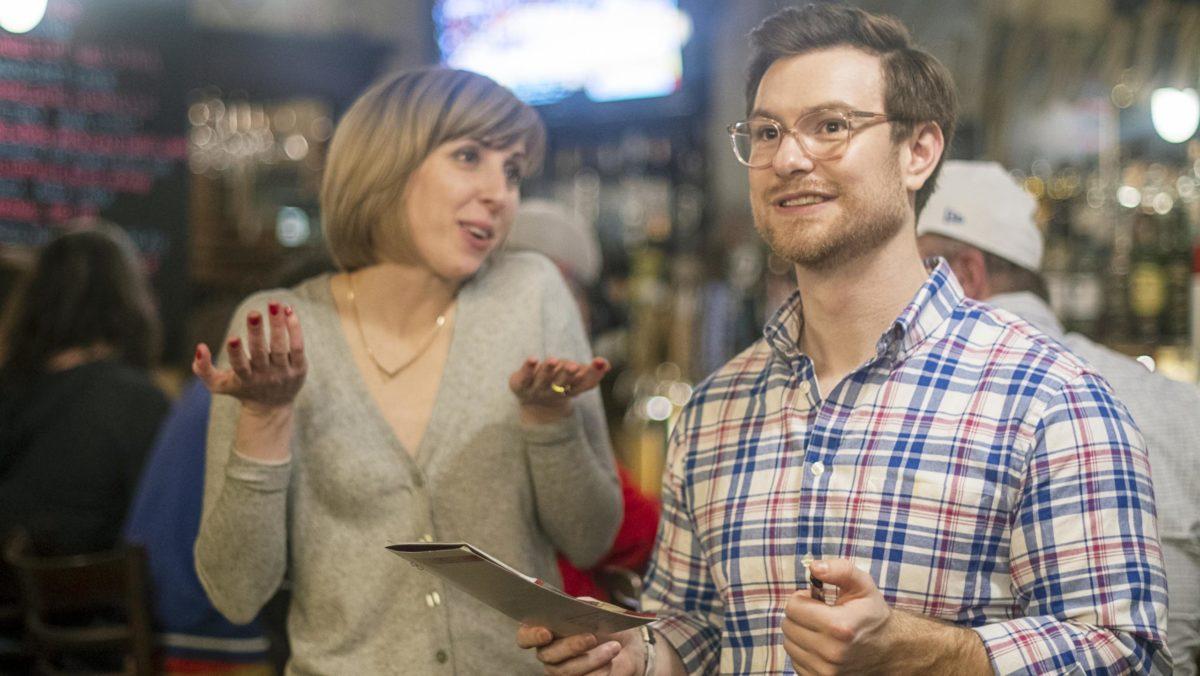 On Monday nights, Kilpatrick’s Publick House fills with Ithaca locals and students playing trivia. Phones are put to the side — or else groups risk disqualification — and Trivia with Geeks Who Drink commences.

Trivia with Geeks Who Drink is co-organized by Kilpatrick’s and Geeks Who Drink, a national organization that hosts trivia nights in 42 states and parts of Canada. Based in Denver, Geeks Who Drink has a large editorial board that works every week to come up with questions and topics for the games. The event was formerly 21+ when it was hosted by The Haunt in Ithaca on Tuesday evenings. Since its switch to Kilpatrick’s in 2018, the event is free and open to all ages.

Kavi Kardoshian has hosted the event at Kilpatrick’s ever since she came to Ithaca from Houston three years ago. She said the game’s national scale makes trivia night especially exciting because it is more than just a social experience on a local stage.

“They’ve got it down to a science,” Mameli said.

Kari Aldrich sat at the same table as Mameli and also participated in the quizzes. Besides being a regular at the event, Aldrich is a substitute host, and she takes over the trivia event when Kardoshian is out of town.

“We’ve been to [trivia nights] where maybe the questions are good, but the presentation is really janky,” Aldrich said. “We’re pretty chill. We just like going and having a good time, but it’s nice that it’s so well organized.” 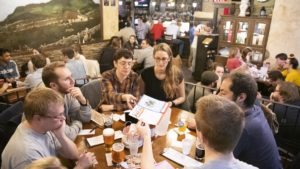 The event happens every Monday from 8 p.m. to 11 p.m. at Kilpatricks Publick House. Patrons can play alone or in a group.

Trivia games at the pub consist of eight rounds of eight questions. Kardoshian said some quizzes revolve around themes with straightforward questions while other rounds are audio- or visual-based. Groups win points for every round, and, depending on the subject, some rounds are worth more than others.

Staying true to the name of the event, the quizzes are based on traditionally geeky interests like television shows or movies.

“‘The Office’ [quizzes] are always really popular,” Kardoshian said “For some reason, people seem to love that show more than ever. I don’t get it.”

In the first round of one game, Kardoshian asked players to explain the plot of a movie as if they watched it backward. Rounds two and seven were audio rounds, which meant the player had to identify a song or movie based on the audio alone. In the fifth round, the clues were visual, so players had to come up with the answer to a broad question based on pictures.

“I would say my favorite part of any given trivia night is when the answer is on the tip of your brain,” Aldrich said. “You are really suffering to remember it, and then you remember it without any help.”

Aldrich said the explicitly geeky theme of Trivia with Geeks Who Drink is what attracted her and her husband back when it was still located at The Haunt.

“We would go to shows [at The Haunt], and we played in a band, and our band would occasionally play shows there,” Aldrich said. “We saw the [trivia night] posters and … the little graphics like the girl with the pink hair and the nerdy guy in the Top Ramen shirt, and I was like, ‘That’s us! We should go to that.’” 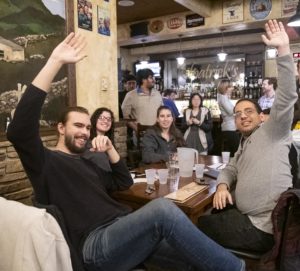 Trivia Night With Geeks Who Drink is a weekly event that is held in the United States and parts of Canada.

Outside Ithaca, trivia players also have the opportunity to take their skills to the next level. They can compete in the annual Geek Bowl, a fundraiser for a different charitable cause every year. This year, the bowl will be held in March at Navy Pier in Chicago. Geeks Who Drink also hosts an event called Quiz for a Cause, an offer that nonprofit organizations can utilize for fundraising efforts and community outreach. Participants pay an entry fee of $5–$10, part of which goes to the night’s winners. The rest goes to the nonprofit.

Students from Ithaca College also attend the local trivia night. Patrons can choose to play either by themselves or in groups of up to six people. Juniors Aidan Glendon and Alex Eischen frequent the event together. Glendon said he has just started attending the event regularly and has since enjoyed the night’s relaxed but competitive atmosphere.

“It’s this nice, fun, relaxing vibe, and everybody’s there just to have a good time,” he said. “It’s a little competitive, and we’re always thinking how best to play our game.”

Aldrich and Mameli also said the atmosphere and level of friendly competition keep them coming back.

“Typically, people are not obnoxious [or] way too intense, but people push down, and they’re into it,” Aldrich said.

Even though he’s participated in trivia nights before, Eischen said he thinks the recurring event at Kilpatrick’s is the most entertaining one he’s been to.

“It’s the best way to spend a Monday night,” Eischen said. “We’ve never won, but we come back every week. … I’ve done a little trivia when I was younger, but this is the most fun I’ve had.”