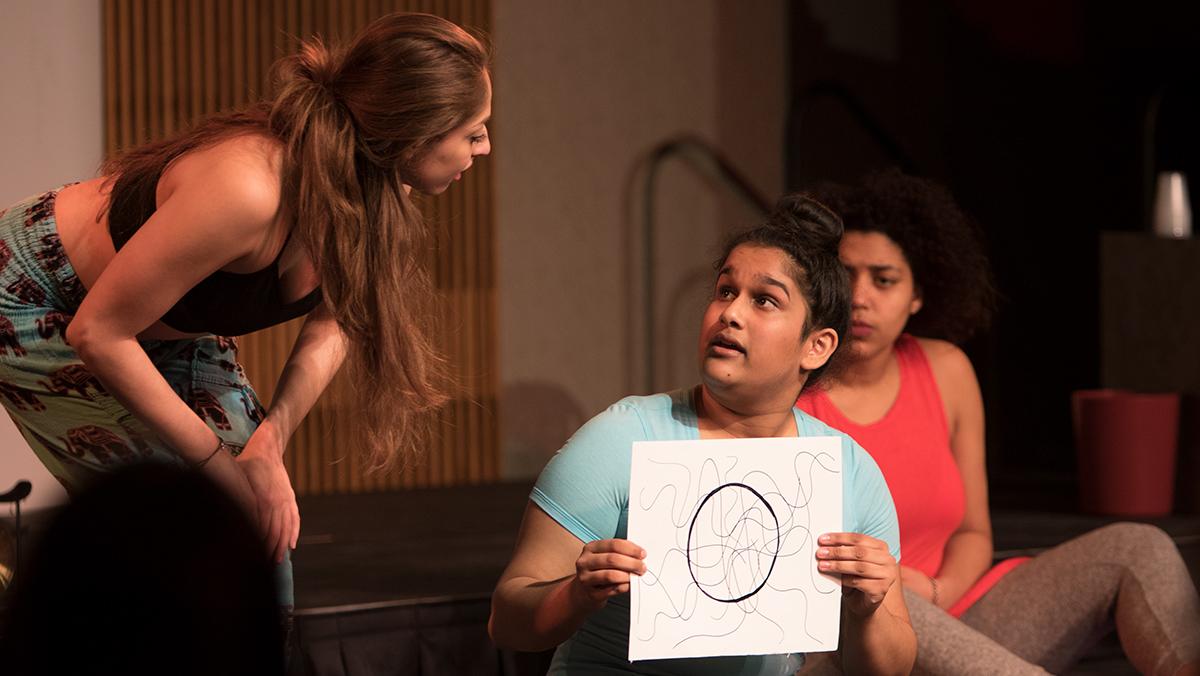 An older woman hesitantly shares her experiences of sexuality after recovering from cervical cancer. A lawyer-turned-prostitute intimately tells of her passion for other women. A young homeless woman recounts a memory of a traumatizing childhood rape. These are just a few of the many emotional and powerful monologues presented within playwright and activist Eve Ensler’s award-winning “The Vagina Monologues.”

“The Vagina Monologues” discusses the stigma around women’s sexuality and spurs dialogue about women, violence against women and the push for equality. Through monologues compiled by Ensler, such as “My Revolution Begins in the Body,” “My Short Skirt” and “My Vagina Was My Village,” the play shares personal accounts of women’s experiences and emotions on this topic. All proceeds from the play, presented by IC Players at two show times Feb. 19  in the Emerson Suites, benefited “V-day,” a global activist movement dedicated to increase awareness of violence against women. The performances drew in about 140 people for both shows, and IC Players raised about $815 for the organization.

After three years of acting in “The Vagina Monologues,” senior Jessica Braham, a theater arts management major at Ithaca College, directed the play. Braham said the play is especially relevant now because of the current political climate and that she strived to use her power to address these political issues.

“I felt like I could bring my vision to life, and I could finally be the one to inspire other women to voice these stories,” Braham said. “There’s a lot of criticism about the show because people are asking, ‘Why are we still doing this? Women have rights.’ … But I felt like this year was the time. This is when we need it now more than ever.”

Braham said a key theme in the play was to stress the importance of women supporting and empowering other women. She said that while directing the play, she especially encouraged the cast members to empower one another.

“Women empowering other women is something that is so important and something that we don’t really have a lot of,” Braham said. “This isn’t the time to segregate ourselves and separate from the issues. This is when we all need to come together and rally and fight for what is right … for our rights and equality.”

True to the message of women supporting other women, sophomore Hannah Paquette, assistant director of the play, said she aimed to create a sense of community among the women whose stories they were telling in the play.

“These dialogues and conversations and sometimes these thoughts don’t even happen unless there’s a community of women where those things can come out,” Paquette said.

Another important part of the play, Paquette said, is that it changes each year. This year, the spotlight monologue, a piece written by Ensler and selectively added to the performance, was “I Call You Body,” a monologue demanding safe and violence-free workplaces. The spotlight monologues each year highlight specific issues that are stressed in the yearly campaign for One Billion Rising and Vday.org, two organizations established by Ensler to combat violence against women. The additions help keep “The Vagina Monologues” relevant, Paquette said, allowing for the play to be a living body of work.

“It’s a really important point of activism for me … being able to do this show, especially in this time period,” Paquette said. “It [shows] defiance and resistance.”

Erin Lockett, a freshman acting major and the narrator of the play, said the show is an important feminist piece because it addresses the stigma face-first, without any shyness.

“I think that if not everyone, a lot of people are very uncomfortable talking about vaginas because of the stigma that surrounds it,” she said. “I think ‘The Vagina Monologues’ … brings up the stigma. It names it, and it addresses it, and it analyzes it.”

Lockett said the play commands attention and respect because of its direct style of addressing touchy subjects.

“I think that’s just a way more powerful way to address [the stigma],” she said.

Without powerful, artful statements such as this play, Braham said, none of the universal problems referenced would be resolved. Braham recommends that people who fear the stigma see the performance.

“Nothing will ever get solved by shying away and not addressing the situation or the problem at hand,” Braham said. “So to someone who is not going to come because of the title … Why not give it a shot? Have an open mind. … Maybe you’re uncomfortable, but isn’t that the theater that matters and provokes conversation? I want people to leave, go have dialogue and take action about what they just saw.”