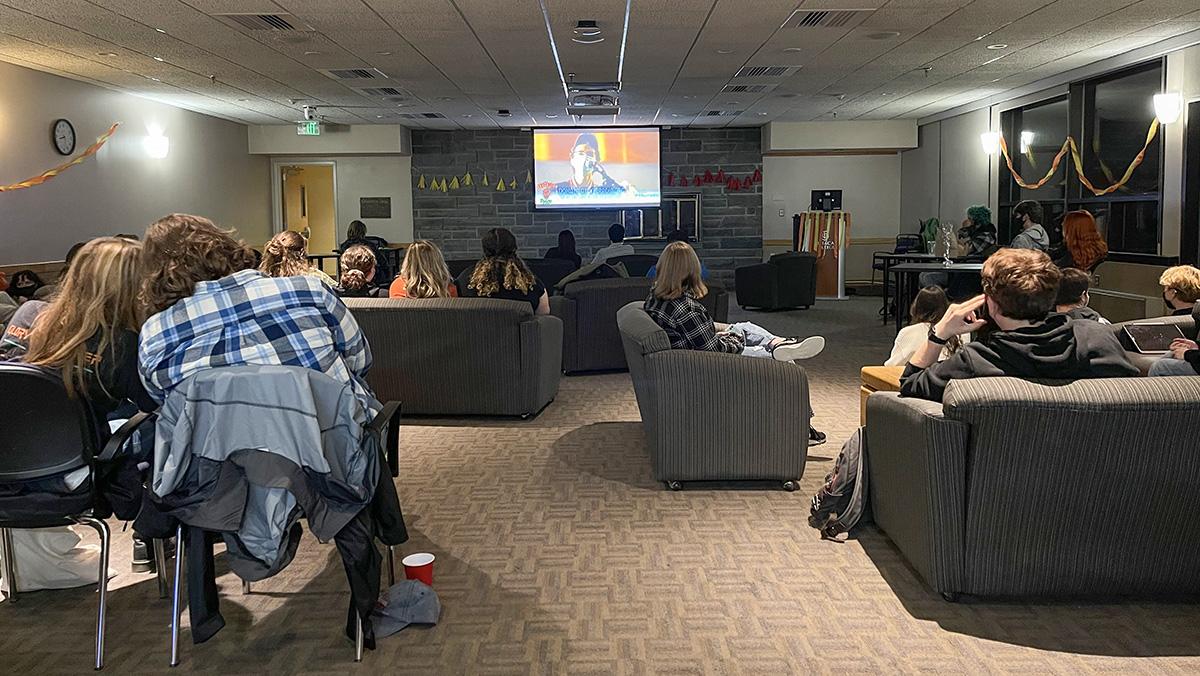 Heads were bopping, toes were tapping and phone lights were swaying at Clark Lounge in Ithaca College’s Campus Center. The space was transformed into the student jam session of the semester for VIC Radio’s Virtual 2021 Fall Benefit Concert on Oct. 23.

The hybrid event was a YouTube live stream that allowed people to watch in person at the listening party or remotely. The concert featured recordings of artist Samuel B. Lupowitz, student bands VESTMENTS, Library of Egress (LOE) and Ithaca’s own X Ambassadors. The concert jump-started VIC Radio’s annual fundraising that is normally done only at the 50 Hour Marathon Event — its weekend-long fundraiser where four DJs stay up for 50 hours straight. This year VIC is raising funds for Ithaca’s Southside Community Center, which devotes itself to creating a community for African Americans in the greater Ithaca area. The center runs programs and forums on the contributions of Black people to the history of the Ithaca area. The proceeds from VIC’s fundraising will go towards the Center’s after-school programming.

While in-person activities this semester means elements of life can go back to normal, events that rely on singing — which are high-risk events — continue to pose a difficulty when trying to organize.

“I thought of it back in August when we were trying to decide what exactly to do,” Griebel said. “We weren’t sure how COVID was going to go, [and] it was really hard to find events. So I was just like, what if we do both, what if we do it half virtual and half in person.”

Griebel said organizing the event took much time and energy. She said she spent many hours sending emails to artists and bands, as well as organizing with the beneficiary of the concert, the Southside Community Center.

“Yeah, it’s been a lot,” Griebel said. “But it’s been really fun. I’ve been planning it since August, which is so weird to think about, that almost three months of planning spun into this.”

LOE is made up of seniors Justin Lindsay on the guitar and vocals, Peter Jensen on drums, Gabriel Levin on bass and junior Wallace Petruziello guitarist, singer, as well as certified band ringleader.

Lindsay said LOE was excited for this to be their first official performance post-COVID and although they were disappointed that the event was solely virtual, they were very proud of the end product.

“We got our video basically done, like, under 24 hours after we filmed it,” Petruziello said. “I mean, it doesn’t get much better than that when it looks good and has a professional quality.”

The benefit concert was the debut performance for the student band VESTMENTS which is made up of junior Athena Rajnai, the lyricist and lead vocalist, and Petruziello as the guitarist instrumental arranger.

The medium of the benefit concert created some complications for the student bands, but in the end Petruziello said he is happy with the content created by both LOE and VESTMENTS. Petruziello said the problems that arose allowed them to produce videos that were better than their original concepts.

Rajnai said that despite the difficulties that arose surrounding the virtual benefit concert, it is always important to remember why the bands are doing the concert to begin with.

“At the end of the day this project isn’t really as much about the product as it is about what we’re performing for,” Rajnai said. “It’s always really nice just to know that we are doing something for a purpose like this because Southside is really really important. It’s a really important place in Ithaca, I think it was just knowing that that’s the place that we were performing for [that] drove a lot of our ambition for this performance.”

Junior Reilly Shingler attended the in-person listening party for the virtual benefit concert. Shingler said that while she is not personally involved with VIC Radio, she attended to support her friends who are.

“Getting to see a bunch of local artists and the X Ambassadors was really cool,” Shingler said. “I think it was really awesome that so many people showed up for a college radio station. I just think that the event was awesome.”