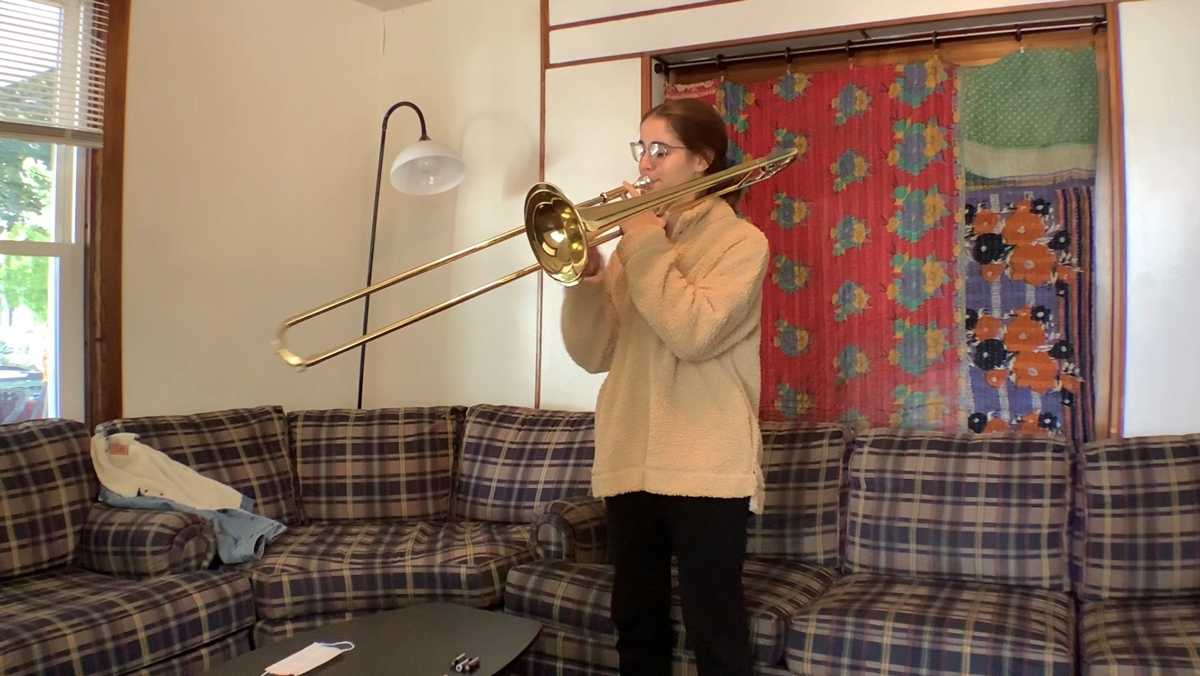 Emily Lussier/The Ithacan
Ithaca College senior Karly Masters is learning two new instruments, trombone and French horn in F, this semester. She said that this has been difficult over Zoom because her professors cannot hear her play as much.
By Arleigh Rodgers, Emily Lussier — Life & Culture Editor, Senior Writer
Published: November 6, 2020

In past semesters, senior Alex Renna spent her time practicing in her professor’s studio in the Ithaca College James J. Whalen Center for Music, congregating with her friends in the Diva Lounge or even struggling through late-night study sessions with her peers. Now, she spends most of her work time in her living room in her house on Danby Road in Ithaca, hoping that when it comes time to sing, her roommates will be quiet upstairs.

Renna is a vocal music education student at the college, where online classes for Fall 2020 have posed difficulties in teaching and learning for faculty and students in the School of Music.

Renna takes voice lessons with Alison Wahl, assistant professor in the Department of Performance Studies. Wahl said that it has been difficult to schedule private lessons with her students this semester because some have inconsistent internet access or do not have comfortable practice spaces at home.

“We can plan all we want, but if the Wi-Fi goes out, there’s not much we can do,” she said.

Adapting programs to hybrid models, or online models like at the college, has presented challenges for music conservatories across the country. Issues have included working with technology issues, like audio problems or delays, working across time zones and performing remotely or socially distanced.

Renna said that it is challenging to plan when she will practice or record herself singing for class around her roommates’ schedules.

“My living room is my practice room now,” she said. “Whenever I have to practice or record something, I’m like, ‘Hey, you guys can’t watch TV right now. I have to do my school,’ which is difficult, and I feel bad for the people I live with for that.”

Renna’s two roommates, seniors Kelly Campbell and Taylor Stefanik, said that living with Renna has not been disruptive to their own virtual classes. The trio lived in the same house last semester, and Campbell and Renna lived in Ithaca after classes went online in the spring while Stefanik returned home.

Stefanik said that because she’s a physical therapy major, she either has classes early in the morning or on-campus for labs. There’s little overlap between Renna’s afternoon classes and hers as a result, she said. On the other hand, Campbell has warned of Renna’s potential singing to her classmates as a way to break the ice before presentations.

The three roommates first met through Premium Blend, an all-female a cappella group at the college. When Renna practices her opera pieces, Campbell said she can sometimes hear Renna stop abruptly, swear when she makes a mistake and start again.

“I’m a singer too, and I know that if I had to sing like that, and I knew that people could hear me, … I would feel really uncomfortable,” she said. “It’s just not an ideal situation for her.”

Senior Karly Masters, a viola music education major, is also living in Ithaca with two other music students. She said that noise is a problem in her house, where the walls are thin and sound travels easily.

“There’s nowhere in the house you can go to escape it,” Masters said.

Masters also said that having her viola lessons and secondary instrument classes over Zoom has been much more difficult.

“As many people might have realized, the quality over Zoom is not too good with the audio, so it’s really hard to pinpoint specific things in your playing that are not really visual,” she said. “You can hear intonation. You can hear a lot of stuff, but really just the nuances of your playing is hard to judge over Zoom.”

Mike Titlebaum, associate professor and director of jazz studies in the Department of Performance Studies, said it is impossible for students who study jazz to re–create the in-person interaction of a performance, particularly with improvisation. 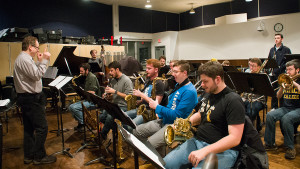 During his classes or practices with the Ithaca College Jazz Ensemble, Titlebaum asks students to mute themselves while he plays a piano accompaniment. This way, students can play their instruments without worrying about lagged audio, he said. Students will sometimes also play solos for feedback or for other students to play along while still on mute.

Instead, Titlebaum’s classes this semester and rehearsals with the Jazz Ensemble, which he oversees, revolve around skill-building, like teaching his students how to play in every scale. These basic skills will inform students’ decisions during in-person improv performances in the future.

Titlebaum said this new approach — something he did not have time to formulate before classes went online last spring — focuses less on students’ final performances and rather the foundational elements of jazz.

“We spend so much time and energy, rightfully or wrongfully, thinking about the concert,” he said. “All those rehearsals were actually what the learning was all about, and the concert is more of a snapshot in time of what we’ve learned up until that point. … Learning to interact with other musicians, learning to give constructive feedback builds this culture of mutual support and admiration, and that’s all an important part of it, too.”

The Jazz Ensemble performed virtually Oct. 20. Members of the Jazz Ensemble used prerecorded tracks to accompany their performance, with the exception of two students who played a duet on the same screen because they live together, Titlebaum said.

Sophomore Nate Oczkowski, a music education major and trumpet player in the Jazz Ensemble, said he misses the adrenaline and anticipation of playing live.

“It’s so exciting to just be like, ‘Hey, I got a concert coming up. Come hear some great music,’” he said.

Oczkowski also said Titlebaum’s methods of teaching the Jazz Ensemble have been most effective in keeping him engaged in classes while living at home in New Hartford, New York. He said some of his other courses have failed to make him feel as if he’s still learning, partially because of the virtual medium.

“I am learning so much more [through Jazz Ensemble] than if I were to just be playing in a concert, going to rehearsal and preparing pieces for a concert, as opposed to really breaking down the technique of improv,” he said.

The college is currently preparing to allow students back to campus for in-person instruction in the spring with a hybrid model. Courses will either be offered in hybrid format, with instruction being remote through Feb. 5, or online synchronous or asynchronous.

Keith Kaiser, interim dean of the School of Music, said that some courses will be hybrid and some will be online depending on the subject matter and as determined by faculty members. The majority of music ensembles and music education courses are listed on HomerConnect as being hybrid, while classes in the Department of Music Theory, History and Composition are more evenly split between the hybrid and online models.

This semester, Matthew Clauhs, assistant professor in the Department of Music Education, said he is structuring his courses mostly asynchronously by packaging all the content into weekly modules.

“My goal is to allow for the greatest amount of flexibility while still providing a very clear structure and expectations for when things are due,” he said.

Clauhs said the biggest obstacle for music students is being unable to create music with one another. He said that faculty members are trying to find creative ways to collaborate virtually. One strategy has been using Soundtrap, an online cross-platform audio workstation, to collaborate on a single piece of music together. 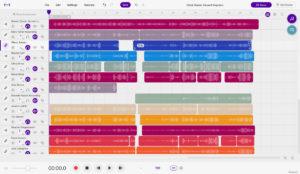 Professors and students in the Ithaca College School of Music have been using Soundtrap to collaborate on music projects together during remote learning. Senior Alex Renna said that she uses Soundtrap in her choir class. Courtesy of Alex Renna.

Renna said that she has been using Soundtrap for her choir class and that each student will go into the same project on their own time and record their singing part.

“It can be frustrating at times, just like any technical thing can be, … but it’s definitely a way that we can still keep making music, which I really like,” she said.

Renna said she is feeling more stressed this semester because her music courses demand more time spent working outside the class period due to online learning.

“For choir, not only do we meet every single day but … we have to then go and record all of our songs into Soundtrap and then record videos of us singing along to it,” she said. “So it’s a lot more outside-of-class work than we normally would get.”

Students in the School of Music face demanding workloads, harmful competition and unbridled criticism. They usually take 18 credits or more every semester, placing an impermeable strain on their mental health and lives outside school.

Oczkowski said that as a member of the men’s track and field team, he finds it difficult to balance his extracurriculars with classes, but he also said that the value of taking breaks to prioritize mental health over work is essential to his routine. Every night before going to bed, he uses the meditation app Headspace to clear his mind after a stressful day.

“I feel like the stuff [professors are] assigning us is not necessarily more in quantity or more difficult,” he said. “I think it’s just finding the time and mental space to actually do the work. I feel like at home there are so many things that can distract us that sometimes it’s hard to find that space to really complete work for classes.”

Wahl said that though it has been harder to connect with her students, virtual learning has also given her a new insight into their worlds at home.

“We have a window into each other’s lives that we always could’ve had if we’d reached a little bit deeper, but now it’s right there for us to touch,” she said.