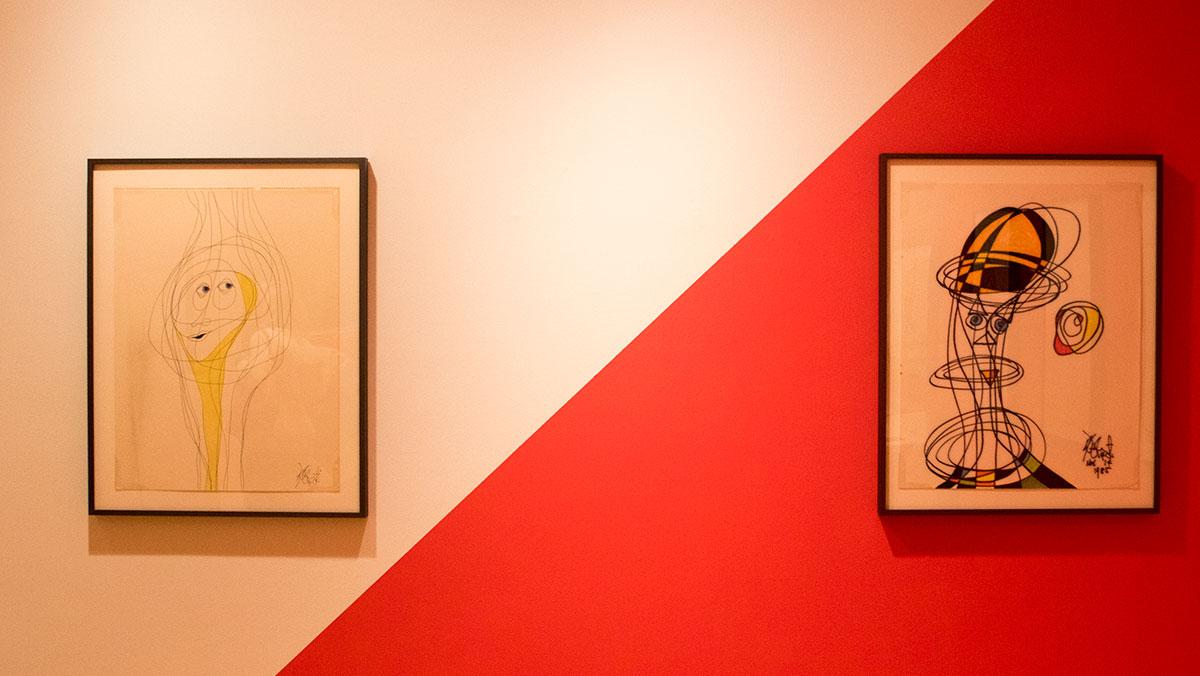 Kait Turkett/The Ithacan
“'So it goes': Drawings by Kurt Vonnegut” is open from now until Dec. 20 and showcases a collection of Vonnegut’s artwork and personal items.
By Katherine Segovia — Contributing Writer
Published: November 2, 2015

The words of renowned author Kurt Vonnegut are breathed in cursive onto the vibrantly colored walls of the Herbert F. Johnson Museum of Art at Cornell University. These quotes further frame the visual art of Vonnegut, who is known more for his words than his paintings.

“’So it goes’: Drawings by Kurt Vonnegut” is open from now until Dec. 20 and showcases a collection of Vonnegut’s artwork and personal items.

The Johnson Museum frequently highlights the successes of its alumni. Vonnegut attended Cornell University in the 1940s, although he left for war in 1944 and never actually graduated from the school. Nancy Green, curator of the museum, said it is important for students to be able to see the accomplishments of these alumni who were once in their position.

“Kurt Vonnegut is a good example of someone who came to Cornell and was not necessarily a serious student. He was a chemistry major but eventually went back to writing, which was his first love,” Green said. “One thing we can learn from [Vonnegut] is that the creative part of the brain is something you should nurture.”

Each piece was obtained through Nanette Vonnegut, Vonnegut’s daughter. Green said Vonnegut entrusted these pieces to his daughter, who is also an artist, in the ’90s.

“He thought she would appreciate the pieces,” Green said. “She didn’t really look at the pieces until after her father died, and then she felt that connection with him on an artistic level.”

Many of Vonnegut’s drawings incorporate faces and bodies with an abstract twist. Unusual facial features and expressions, along with various black lines running across the page and over the face, work together to create the works. While each piece was completed around the 1980s, only a few of the pieces have recorded dates of completion. Green said the dated pieces have some personal significance.
“Some of the dated pieces are the anniversaries of big events in his life. These pieces are more autobiographical and less humorous,” Green said. “Each piece reflects something he wanted to say in that particular moment.”