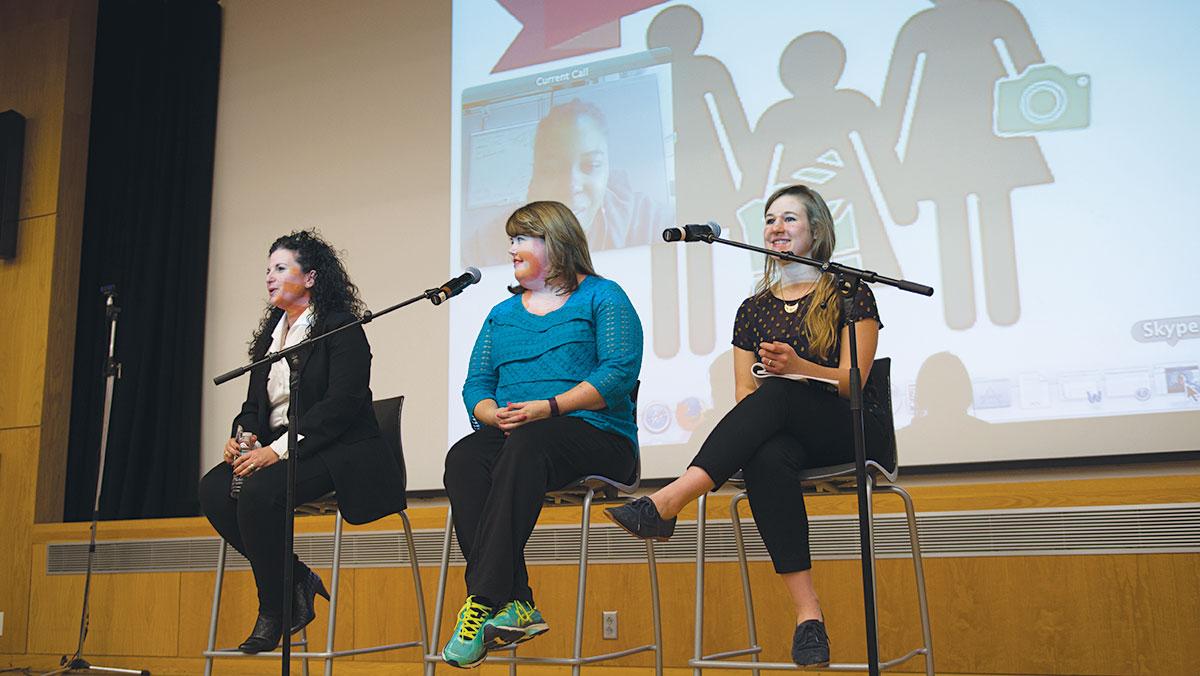 Thomas Battistelli/The Ithacan
From left, Cindi Berger '83, assistant professor Chrissy Guest and Allison Usavage '11 discuss issues of representation of women in the media during the Roy H. Park School of Communications' Women in Media Panel on March 8, one of the events during the Park School's Women in Media Month.
By Kate Nalepinski — Staff Writer
Published: March 9, 2016

“We’re seeing a gap from research that women graduating from art and film schools make up 60 percent of the population in those schools, so why are women only making up 20 percent of the industry?” asked Chrissy Guest, assistant professor of media arts, sciences and studies at Ithaca College and a representative from “Beyond Ink & Paint: The Women of Animation.”

“So that question is my research for this summer,” Guest said. “Women in Animation is dedicated to have it 50–50 in the industry — that’s 50 percent women, 50 percent men. It’s an ambitious goal.” The speech was part of the Roy H. Park School of Communications’ Women in Media Panel, shining a light on recognizable women in the business. 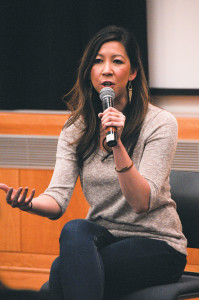 On March 3, Emmy Award-winning filmmaker Dana Michelle Cook, above, and Sarah Moshman spoke about their film “The Empowerment Project.” Kendyl Bennett/ The Ithacan

Yet according to Women’s Media Center, gender inequality exists across all media outlets. According to a study conducted in 2013, men held the majority of media spots, holding 63.4 percent of positions, leaving women with 36.1 percent.

“Women are the majority in the Park School. Women certainly hold leadership roles in the school, both in student and academic leadership,” said Diane Gayeski, dean of the Park School. “What they may not realize is that once they get out into the profession, that’s not necessarily the same.”

In order to emphasize the power women deserve and to shine a light on the underrepresentation of women, the Park School created its first–ever Women in Media Month, holding events that recognize influential women in the business. The event also correlates with International Women’s Day on March 8, and Women’s History Month. In the past, the Park School has held Women in Media Week.

Gayeski said that this year, there’s been a significant amount of research and professional commentary about the role of women in media, and Women in Media Month is the Park School’s opportunity to investigate themes of underrepresentation.

“This isn’t only their representation on camera or in news coverage, but women behind the scenes as well,” Gayeski said. “I think it’s up to this next generation to change the discrepancies that still exist in terms of opportunities for women. I think it’s important for women to hear from others who are out there … about the ways that they have gotten around many of those barriers.”

The Park School kicked off the series of events with the film “The Empowerment Project: Ordinary Women Doing Extraordinary Things” on March 3. In the documentary, Emmy Award–winning filmmakers Sarah Moshman and Dana Michelle Cook left their careers behind to spend a year traveling from Los Angeles to New York in order to spotlight women in leadership positions around the U.S.

Junior Vanessa O’Connor said she, along with peers from student-run groups like The Studio, helped to promote the screening.

“I’m part of The Studio, which is a student-run professional organization, but I’m also part of a nonprofit called She’s the First,” O’Connor said. “It was a combination of getting all these women-led or women-inspired organizations on board with this Women in Media celebration.”

O’Connor said time constraints were the greatest hurdle in publicizing the screening. She said work on its promotion began in early February, which gave her and other students relatively little time to set up tabling, print posters and otherwise generate publicity.

Both Cook and Moshman were present at the event. Funding for their appearance was provided by the Park Foundation as part of the Park Distinguished Visitor Series. Cook said her experience traveling on the road was the journey of a lifetime.

“How often are you in a minivan for 34 days — but also with four other women?” Cook said. “We were five female filmmakers traveling to meet inspiring women but also mentoring female filmmakers on the way. It was really just this beautiful lady–bubble.”

When discussing the inspirational women they met on the road, Moshman and Cook said it was impossible for them to select just one as the most impactful.

“One of the common denominators about these women was that they were unapologetically leading their lives without being influenced by the opinions of others,” Cook said. “They pursued their own paths. They embraced their authentic, unique selves.”

Cook said she urges young women in the media to own their voice and utilize media as a jumping–off point to tell their stories. 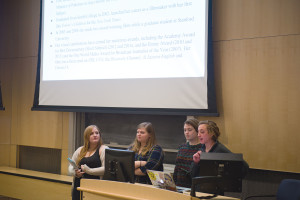 Moshman said she believes some media stereotypes often stray away from the everyday women whom should be focused on. She said people can redirect their attention by creating their own media that exemplify everyday women.

“Movies can rise above the noise,” Moshman said. “Focusing on the real, flawed women is so important.”

A six-hour minicourse titled “Women Working Behind the Scenes” was offered to all students two days after the premiere of the documentary, partially run by Guest. The course focused on women who are practically invisible despite their impact in movie and television production.

On March 8, International Women’s Day, a full audience in the Roy H. Park Hall auditorium roared with cheer as Cindi Berger ’83 finished telling the story of her career in public relations and marketing. After, she and three other panelists — Guest, Anna Deshawn Rainey ’08, who Skyped in from Chicago, and Allison Usavage ’11 — answered audience questions on their career experiences and difficulties in the media industry. Rainey currently works as the director of webcasting services at INXPO, a Web hosting company, and director and founder of E3 Radio, and Usavage is a marketing strategist and a photo entrepreneur.

Berger has worked as a chairwoman and CEO of PMK*BMC, a popular entertainment business, and has been a spokesperson for media giants such as Barbara Walters, Robert Redford and Mariah Carey. Berger told a story about organizing an event between Rosie O’Donnell and Oprah Winfrey, which eventually led to The Rosie O’Donnell show.

“Women want to help women. They want to pass the torch,” Berger said during her speech. “It’s a great privilege to learn from those before you. We all want to achieve the best.”

Each female panelist shared her suggestions for aspiring women in the media. Usavage, the youngest alumna on the panel, pushed listeners to figure out their passions and commit to them. She said she got to her professional position by expressing her passion in marketing.

Deshawn Rainey said what drives her is her passion for radio.

“We are creating a platform where women can speak their own truths, to keep a safe space for people,” Rainey said. “Don’t put limits on yourself.”

At the end of the event, the women shared their stories of sexism in the workplace, and how they attempt to avoid it.

“We need to recognize these individuals and say, ‘That wasn’t a man — that was a mean person,’” Guest said.

Berger agreed sexism in the workplace is inevitable, but women cannot let it ruin them and their careers.

“You cannot let the fear of sexism intimidate you,” she said.

In addition, on the evening of March 8, The Studio held the Women in Media screening downtown. The event allowed aspiring artists to present their media to producers to gain a professional perspective, including women such as Elin Barton, Hilary Shaw and Deborah Hoard, local media business owners. The event was intended to be a film challenge for Women in Media day, but the screening shifted when they decided the purpose of the event wasn’t about who won a competition.

Freshman Anna Gardner, who helped organize the screening, said it’s important that everyone, regardless of gender, be involved in discussing women’s lack of presence in media.

“It needs to be women, men, every other gender,” Gardner said. “Everyone needs to be in on the discourse if the change is going to happen … and I hope we can continue to keep doing this every year.”

Gardner said it was interesting to see how all the screenings had similarities. “Even though we didn’t outright ask them to talk about women empowerment, everyone did. It was really awesome.” 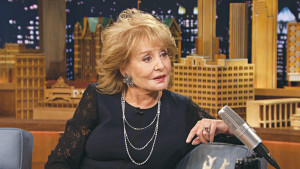 Barbara Walters will be awarded the jessica Savitch Award on March 18 for being the first female co-anchor on nightly news television. Courtesy of NBC.com

Every year, the Park School gives the Jessica Savitch Award to a person who shows excellence in journalism. For Women in Media month, the award will be presented to Barbara Walters on March 18 from the journalism department. Walters is known for being the first-ever female co-anchor on nightly news television.

According to the World Bank’s gender mainstreaming strategy, research shows that societies that discriminate by gender tend to experience less rapid economic growth and poverty reduction than societies where males and females are more equal. To raise awareness of this issue, Digital Instruction and Information Services will be holding  Ed Tech Day and a Women in IT Panel Seminar on March 24. The event will discuss the role of women in information technology and how a diverse workforce benefits a technological environment.

Unanimously, Berger, Guest, Rainey and Usavage agreed the best option for aspiring media makers is to go out and do what they love, regardless of their gender. Berger said she hopes participants learn from Women in Media Month.

“I think we need to remove gender in order to prosper,” Berger said. “I hope these people take away that we need to look up and communicate. It’s important that people, both men and women, unplug and communicate. Write well. Be patient. Be outgoing.”