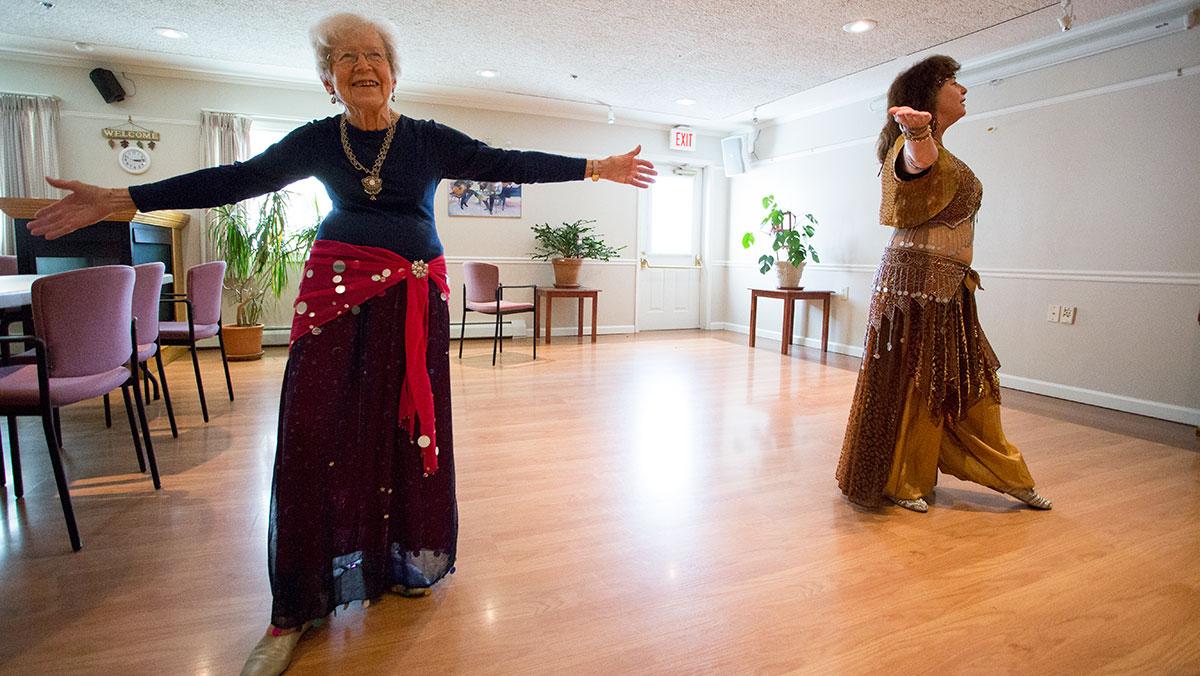 Most students at Ithaca College know her as Katharyn Machan, professor of writing, but in the local community she goes by a different name. As Zajal, the belly dancer, Machan performs and teaches her craft at a wide variety of venues and festivals in and around the City of Ithaca. She is most often accompanied by her dancing troupe, the Mirage Belly Dancers of Ithaca, which will celebrate its 35th year this November.

Machan said she was first inspired to pursue belly dancing in 1979, when she went to a class at the now-demolished Women’s Community Building, led by Carol Openshaw, the most-revered belly dancer in Ithaca at the time. Machan said it wasn’t just the dancing, but the experience as a whole, that drew her in and inspired her to form her own group of belly dancers.

Rather than existing as a rigidly defined group, Mirage has an ever-changing list of members. However, there are those who joined in the early years that are still participating today. Jackie Ferretti, a friend of Machan’s, began dancing with Machan in 1982 and is still active in the group.

Ferretti said although she has been in the group since the beginning, it is Machan that organizes most of the group’s activities and dance routines.

“Katharyn kind of leads it,” Ferretti said. “She doesn’t say that she does, but she does, leading the choreography and helping with music and costuming.”

The origins of belly dancing are somewhat obscure, with roots in various countries in the Middle East as well as in Spain and areas of Western Europe. Due to this cultural ambiguity, the dance form emerged worldwide in the 18th and 19th centuries, steeped in a blend of many different styles of dance and music. The United States has also had an influence on the dance beginning in the late 19th century. This influence mostly involved greater implementation of physical items such as finger cymbals and cloth veils. Machan instead said she likes to think of Mirage as more of a collaborative group, where the choreography is arranged by all group members, rather than by one leader.

Mirage’s style of choreography borrows from many different countries, but Machan said she is most drawn toward and borrows most from the belly dancing of Egypt, which is characterized by more percussive, upbeat music and brightly colored dress. Mirage features classic Egyptian music in their dance, as well as contemporary musicians like Egyptian folk singer Hakim. Machan said she also tries to incorporate items to accentuate her particular dances.

“Because finger cymbals are an important part of what I can do, I like to find a good lively piece that the finger cymbals work well with,” Machan said. “But then I also like the dreamy veil as well, to get going on the folds of silk and chafan.”

In 2009, Machan published “Belly Words,” a book of poems inspired by belly dancing. The book is composed of experiences celebrating the dance form, like the piece “I Wear My Stretch Marks Like Tattoos.” In the poem, Machan writes of how dancing in such a way allows her to appreciate the power or beauty in her physical imperfections. Machan said belly dancing has had a lasting effect on her creative writing, while being a poet has allowed her to think of dancing as a form of physical poetry, particularly with putting together movements.

“When I’m creating a story-dance with people, I feel like I’m composing a poem,” Machan said. “It’s the same process in my imagination.”

In 1999, Machan began a voluntary fellowship with the gerontology institute, working within the department without being part of the faculty. As part of her contribution to the department, she chose to teach free classes at Longview, a senior living center on Danby Road, that same year.

Christine Pogorzala, a longtime friend of Machan and an assistant professor in the gerontology department at the college, guided Machan in starting her fellowship with the institute 15 years ago, and Machan said she works as a liaison between the school and the retirement home. She said belly dancing has been highly effective for many Longview residents Machan dances with, and in general is a fun and therapeutic way for older adults to stay active.

“You’ve got tantalizing music and sometimes sounds from the jewelry worn, the graceful, stretching movements, the tactile sensation of the flowing clothing and scarves, and the visual aspect of the colors and uniqueness of the costumes,” Pogorzala said. “Those in the audience also benefit from the sensory experience of the music and visual effects of costume and dance.”

Like any exercise instruction for older physiques, Machan said moderation is highly important to emphasize when dancing with Longview residents, but with careful activity and the right attitude, age does not mean having to slow down.

One Longview resident in particular, Dorthea Rudge, has participated in the belly dance classes since Machan started teaching there, and is 97 years old. Machan said she takes great enjoyment out of getting Longview residents up and moving during her classes.

“What I like about belly dancing is that it’s loud, it’s full of motion, it’s life,” Machan said. “And whether or not the folks get up and do the moves with me or are just there watching and enjoying it, there’s still that sense of celebration of life, no matter how old you are.”