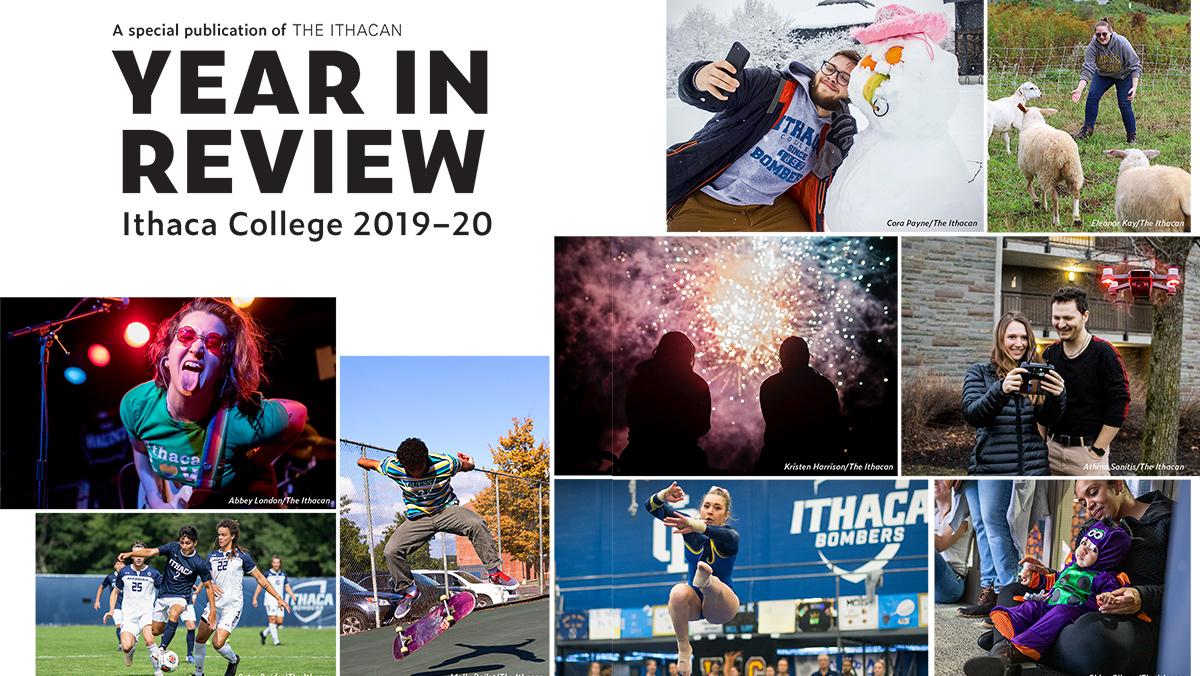 Collage designed by Nicole Peter
Every year, The Ithacan produces a magazine called Year in Review that highlights stories and photographs that defined the academic year. Under unconventional circumstances, the magazine was finished away from campus and will be physically distributed on campus in October.
By Maddy Martin
Published: June 7, 2020

As Sierra Guardiola’s ’20 classes at Ithaca College shifted online in March, her work as The Ithacan’s Year in Review editor came to a momentary halt. She was unsure if the magazine, which highlights stories and photographs from The Ithacan that defined the academic year, would even be produced.

“Once we got the OK to keep moving forward with the book, we were really excited, and everyone was working really hard,” Guardiola said. “We couldn’t have done it without the collective group effort that happened. Everyone pulled their own weight.”

During most years, physical copies are distributed across campus in May and kept out all summer for students, staff and campus visitors to pick up. Because of the campus’ closure, this year’s Year in Review is published online. Physical copies will not appear on campus until October when students are expected back on campus.

Year in Review was created by Guardiola, design editor Nicole Peter ’20 and photo editor Kristen Harrison ’20. The content of the magazine was reviewed by former Editor-in-Chief Sophia Adamucci ’20 and proofread by former managing editor Zoë Freer-Hessler ’20.

The team worked together virtually to finish the magazine, which was completed May 15, approximately a month and a half past its original deadline of April 1.

“Dedication was really key during this time,” Guardiola said. “Normally, when we’re in the office, we leave pages [with edits] and written notes. We just had to really be on top of our game with being on our phone and being available over Slack to address any edits that came up.”

Peter said one of the most challenging aspects of working remotely was not having direct access to the materials she had on campus, like the online server with all of the design elements.

“Things that should take me 10 or 20 minutes often took me between an hour to an hour and a half,” Peter said via email. “It could be very frustrating at times and led to more than a few late nights.”

Although the magazine contains stories and photographs from throughout the year, COVID-19’s effect on the campus community is a large focus. At the beginning of the book, there is a four-page timeline that recounts the events of the coronavirus pandemic and its impact on the college. The timeline starts in January when the first case of COVID-19 appeared in the United States and continues until May 15, highlighting the steps the college took as the pandemic continued.

Adamucci said that even though the end of the year was disappointing, it was still important to feature this significant event in the magazine.

“When we look back at this academic year, what’s going to be remembered is that we left campus and weren’t able to come back, and graduation didn’t happen,” Adamucci said.

Despite the focus on COVID-19, Guardiola said the Year in Review editors did not have a problem with balancing the serious nature of the pandemic with the celebratory purpose of the magazine.

For the design of Year in Review, Peter said she created doodles on her page designs, a theme that runs through the magazine. She sketched images to lay over photographs, like lines over the cheering crowd at Cortaca.

Peter initially planned for the cover of Year in Review to be covered in doodles to match the ones on the inside, but, once everyone was sent home, Peter and the rest of the editors decided to change the cover to reflect the pandemic.

“While this magazine still celebrates all of the joyful, exciting and memorable moments from the year, we agreed that the cover needed to communicate one of the biggest events that people will remember from 2020, and that was the pandemic,” Peter said via email. 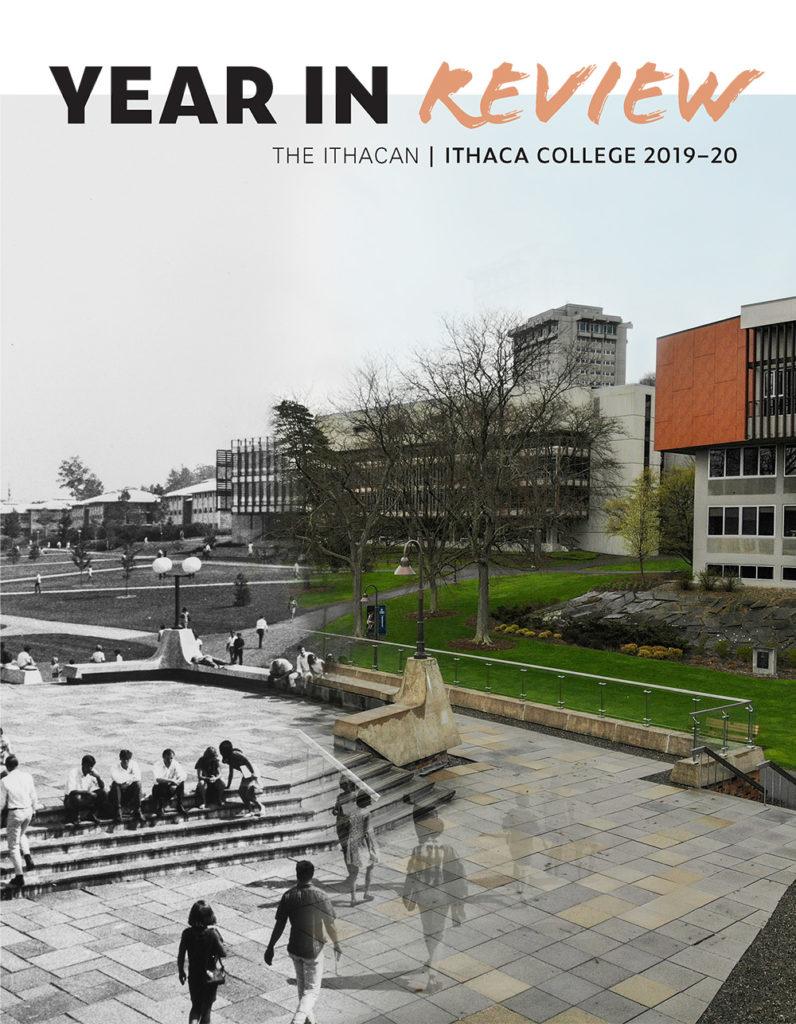 The current cover, designed by Peter, features a 1979 black–and–white photo of students sitting on the patio above Textor Hall bleeding into a picture of the same location, taken in the present-day, without any students.

“An empty photo of campus didn’t really do enough, so we had the idea to show the transition,” Harrison said.

Guardiola said that working on Year in Review allowed her to reflect on all of the good moments that happened this academic year.

“There were so many unanswered questions about … these next few months back in March,” Guardiola said. “It was nice to be able to look back and have this reminder of how good this year had been and how much happened.”