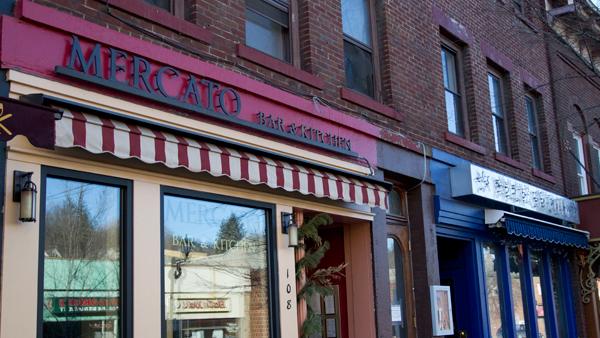 Kristen Tomkowid/The Ithacan
Blue Stone Grill and Mercato Bar and Kitchen are in the process of rebuilding after a fire in their shared basement caused serious damage in December.
By Henry Apostoleris — Staff Writer
Published: January 31, 2013

Blue Stone Grill and Mercato Bar and Kitchen are in the initial stages of rebuilding after a fire broke out in their shared basement in December.

Nancy Gruen, co-owner of Blue Stone Grill, said the restaurant should reopen in four to six months. The co-owner of Mercato Bar and Kitchen, Greg Norkus, said repairs should take around two months, if all goes as planned.

Gruen said the fire occurred on the morning of Dec. 18 after a short circuit in the shared basement of the restaurants.

Ithaca Fire Department was first called to the scene of the fire around 7 a.m., according to Gruen.

Gruen said her husband, Douglas Gruen, who co-owns Blue Stone, arrived at the scene around 7:30 a.m. to find the building covered completely in smoke.

“He said the smoke was so thick that he couldn’t even see the building,” Gruen said.

After the fire was put out by the IFD, Blue Stone Grill had suffered a great deal of smoke damage as well as fire damage, while Mercato Bar and Kitchen mainly suffered smoke damage.

“The restaurant inside is totally destroyed,” Gruen said. “Everything inside the restaurant either has to, if it can be, professionally cleaned or has to be removed and replaced.”

Norkus, along with partners Kate Norkus, Lindsey Norkus and Eric Trichon ’98, said everything in the restaurant needs to be replaced.

“There’s nothing left of the restaurant, if you imagine that you turn the building upside down, anything that would fall to the floor is gone,” Norkus said.

In addition to the damage caused inside the restaurants, tenants in the upstairs apartments were forced to evacuate because of the smoke damage. The building is still vacant, Gruen said.

For the employees of Blue Stone Grill, three or four have already filed for unemployment and are trying to seek work elsewhere for the time being, Gruen said.

Though extensive repairs are needed to reopen the restaurants, both Blue Stone Grill and Mercato Bar and Kitchen said they hope to open back up as soon as possible.

“The estimate that we have been given by the contractor who is doing all of the work says it’s about a two month process, beginning this week, which would probably put us into an early April opening,” Norkus said.

Though months still remain before they reopen, Blue Stone Grill owners Doug and Nancy Gruen are planning to reopen with a newer, fresh image along with a new menu, hours and decoration changes.

“We hope to open with a little bit of a new image and get a fresh start,” Gruen said. “We’re pretty excited about changing some things up and making some real affordable things on the menu gearing towards the college kids.”