Applying to college, taking the SATs and fighting senioritis as a high school senior is challenging enough in a normal year. Faced with a pandemic that makes college tours inaccessible, cancels sports seasons and makes seeing friends a risk, high schoolers are navigating the future with even more uncertainty than usual. At a fundamental moment in their lives, students are forced to adapt and be resilient. They lead their sports teams through altered or canceled seasons, run clubs over Zoom and do their best to find moments of connection to keep them sane.

As college application deadlines draw nearer, seniors deal with not being able to visit campuses in person. They take virtual tours and look at the campuses on Google Maps while gambling on the hope that the college will feel like home. Approximately 3.7 million students are expected to graduate from high school in the U.S. during the 2020–21 academic year, and it’s clear that they will be changed forever by the pandemic.

The Ithacan photo staff photographed high schoolers from their hometowns around the country. 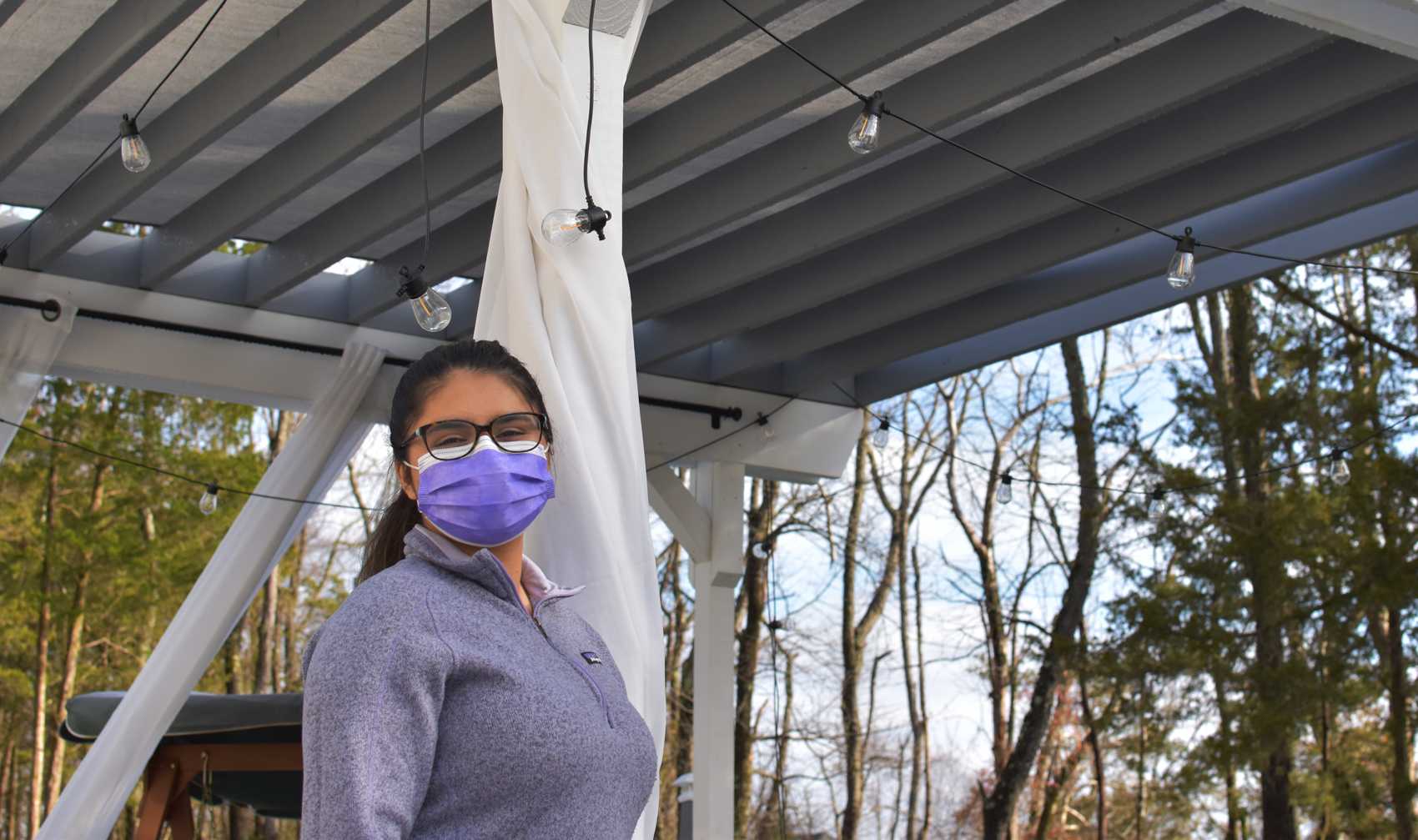 Amenah Ghani, a junior at Montgomery High School in New Jersey, currently has a list of 16 schools, including Ithaca College, and is looking to study music education. “I’m not really able to see the campus and I’m not able to get a full, in-depth feeling,” Ghani said. “A lot of my friends [before the pandemic] have gone to schools and been like, ‘Oh, I get a good vibe from this school,’ and that is not really there for me.” Ghani also said that one of the biggest factors in her college decision is their response to COVID-19. Ghani said her high school had a poor response to COVID-19, so she wanted to attend a college that showed dedication to keeping its students safe. Bec Legato/The Ithacan 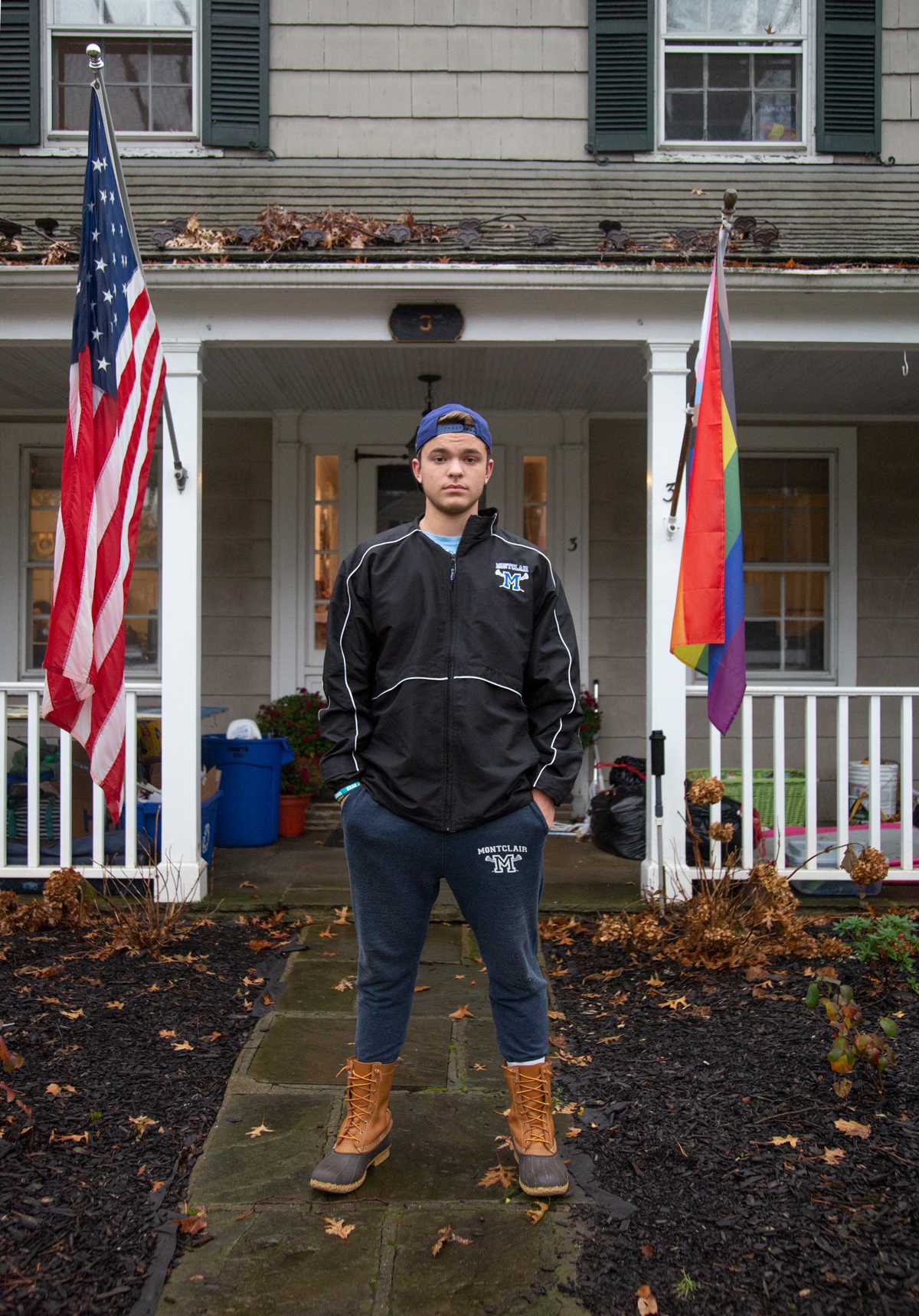 Montclair High School senior Luke Budetti said he consistently flip–flops between his top two schools that he was fortunate enough to visit in person pre-COVID-19, including Vanderbilt University. He has also been on a few virtual tours. “You just don’t get the same experience, and part of the school is getting to walk around, and part of what was nice about Vanderbilt was we walked around and we kind of got lost a little bit but got to see the city and parts of the school,” he said. “The virtual tours just don’t feel like you’re actually gaining much from them.” Budetti stands in front of his home in Montclair, New Jersey. Jill Ruthauser/The Ithacan 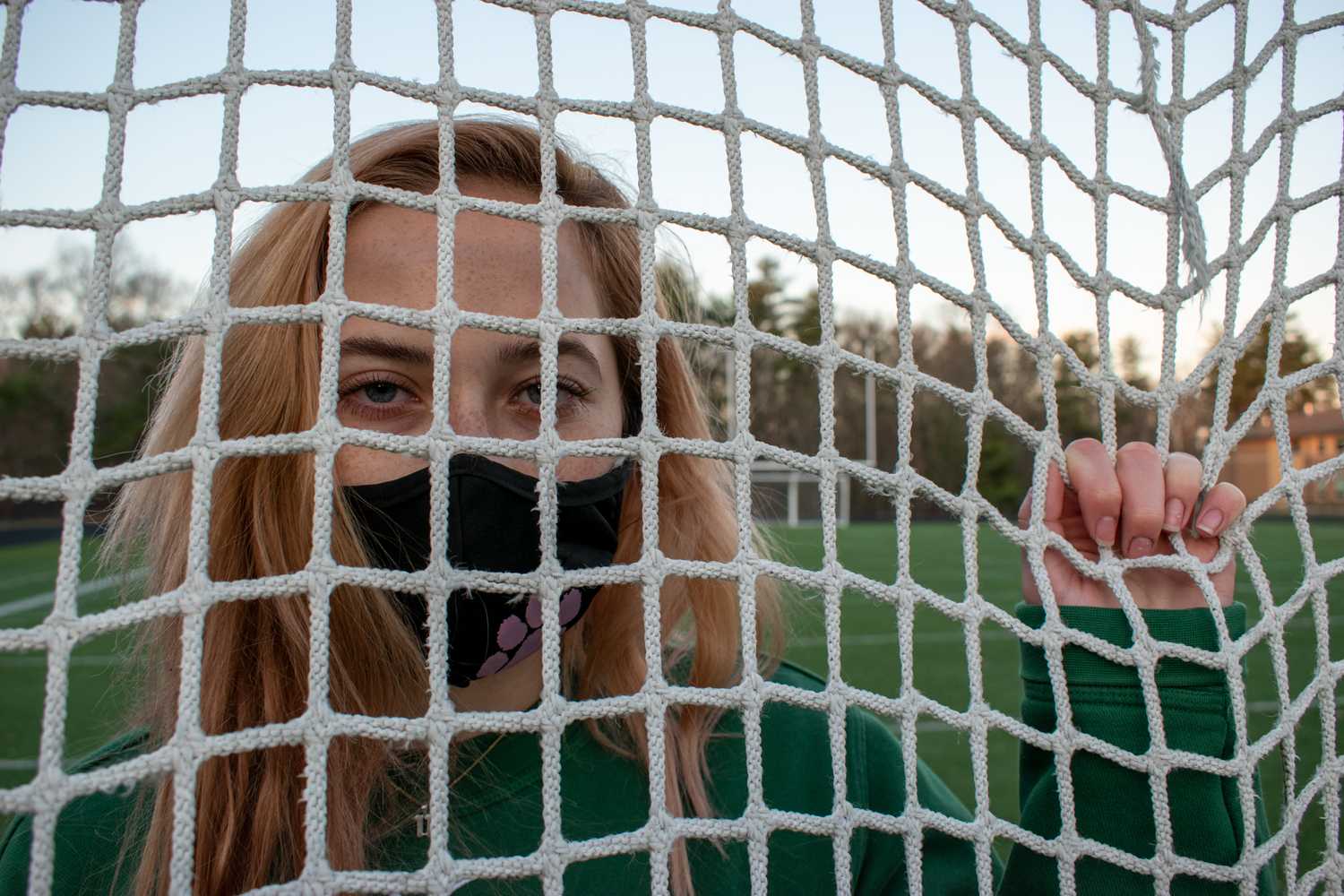 Taunton High School senior Alana Tavares faced many obstacles during her final season of field hockey. With all the restrictions set in place due to the pandemic, she said it was difficult to adjust and play the game as she normally would. “There are different rules,” she said. “Every week it is something new or something is being taken away or added. That was difficult to adjust to with all the new rules.” Here, Tavares stands on her home turf in Taunton, Massachusetts. Paige Tolan/The Ithacan 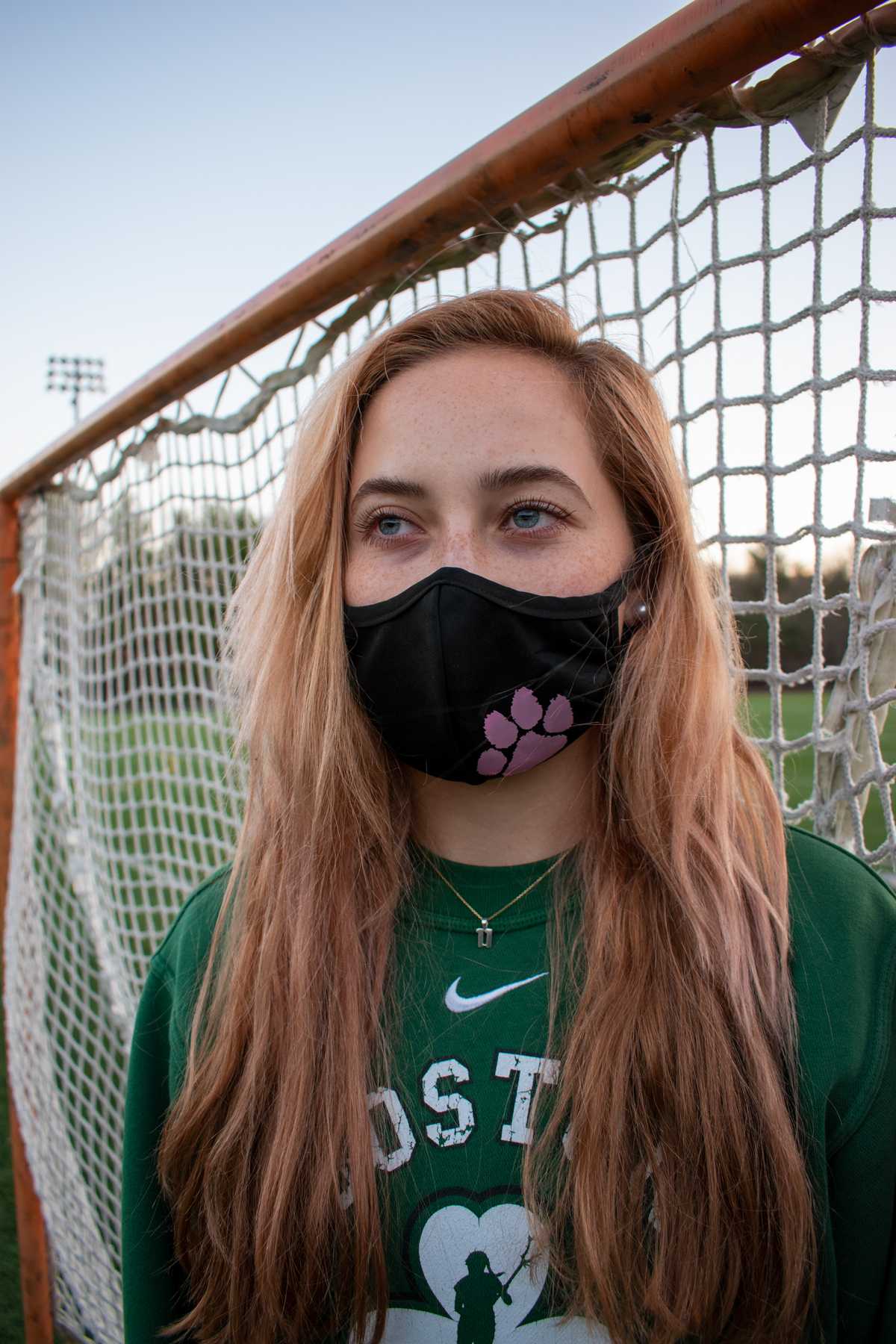 As captain of her field hockey team, Tavares had to lead the way for others. Despite the circumstances, she said that maintaining a positive mindset was crucial. “We tried to make it as positive as we could and tried to put everything aside,” she said. “We tried to just not think about what was going on outside and have it be kind of an outlet for people.” Tavares’ season has been cut short due to the rise in cases in recent weeks. Paige Tolan/The Ithacan 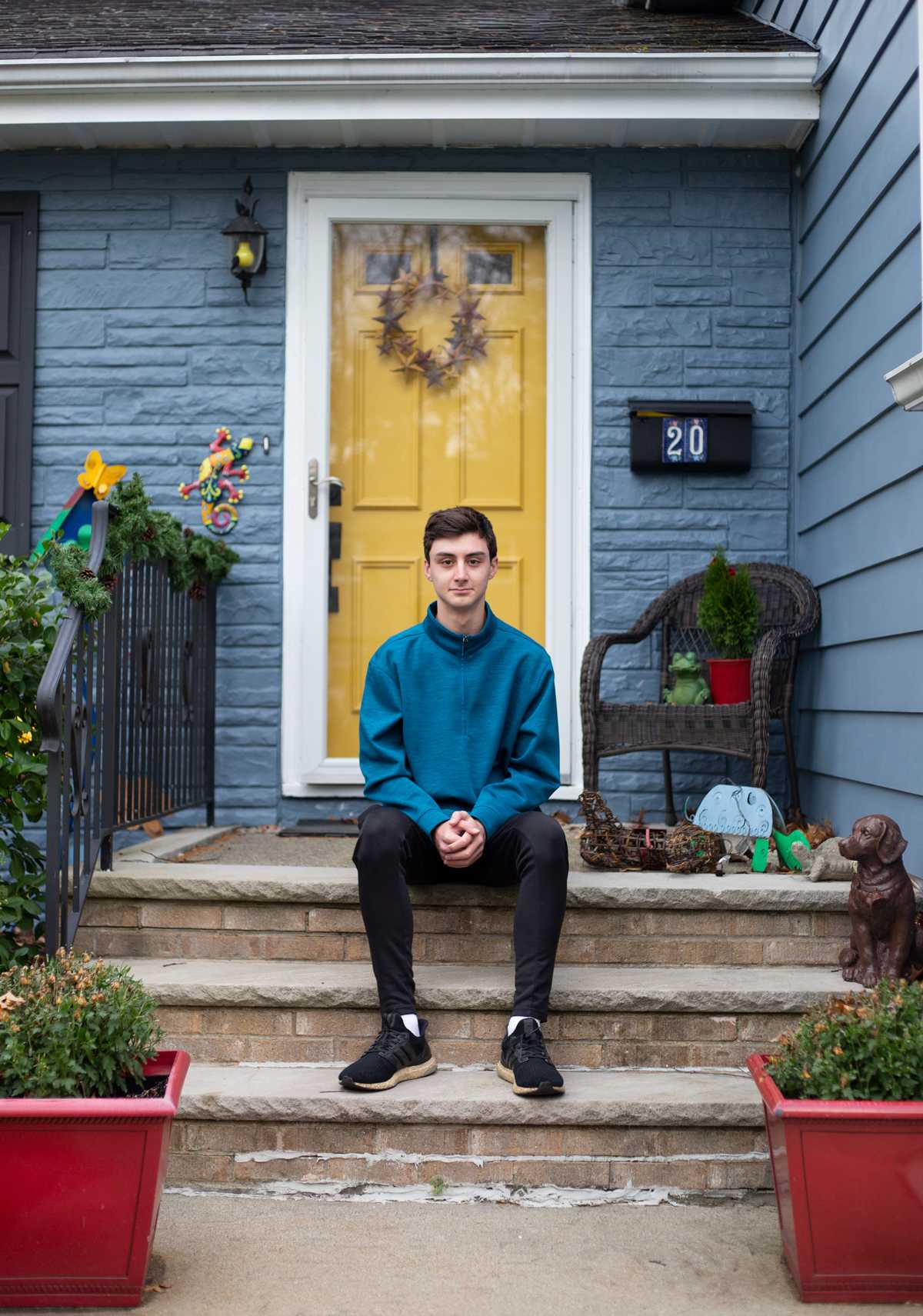 Montclair High School senior Kona Michaud has been able to visit schools in person both pre-COVID-19 and more recently as well. “I have gone on more virtual tours than I’ve visited colleges,” he said. “After seeing about 20, they all started to blend into one another. While I found virtual tours to be a decent and necessary replacement for an in-person tour, it is really hard to ‘find your fit’ in virtual tours as you would in an on-campus tour and admissions meeting.” He added that he has tried reaching out to people who have attended the colleges to which he’s applying to get a better feel for the schools. Michuad sits on his front steps in Montclair, New Jersey. Jill Ruthauser/The Ithacan 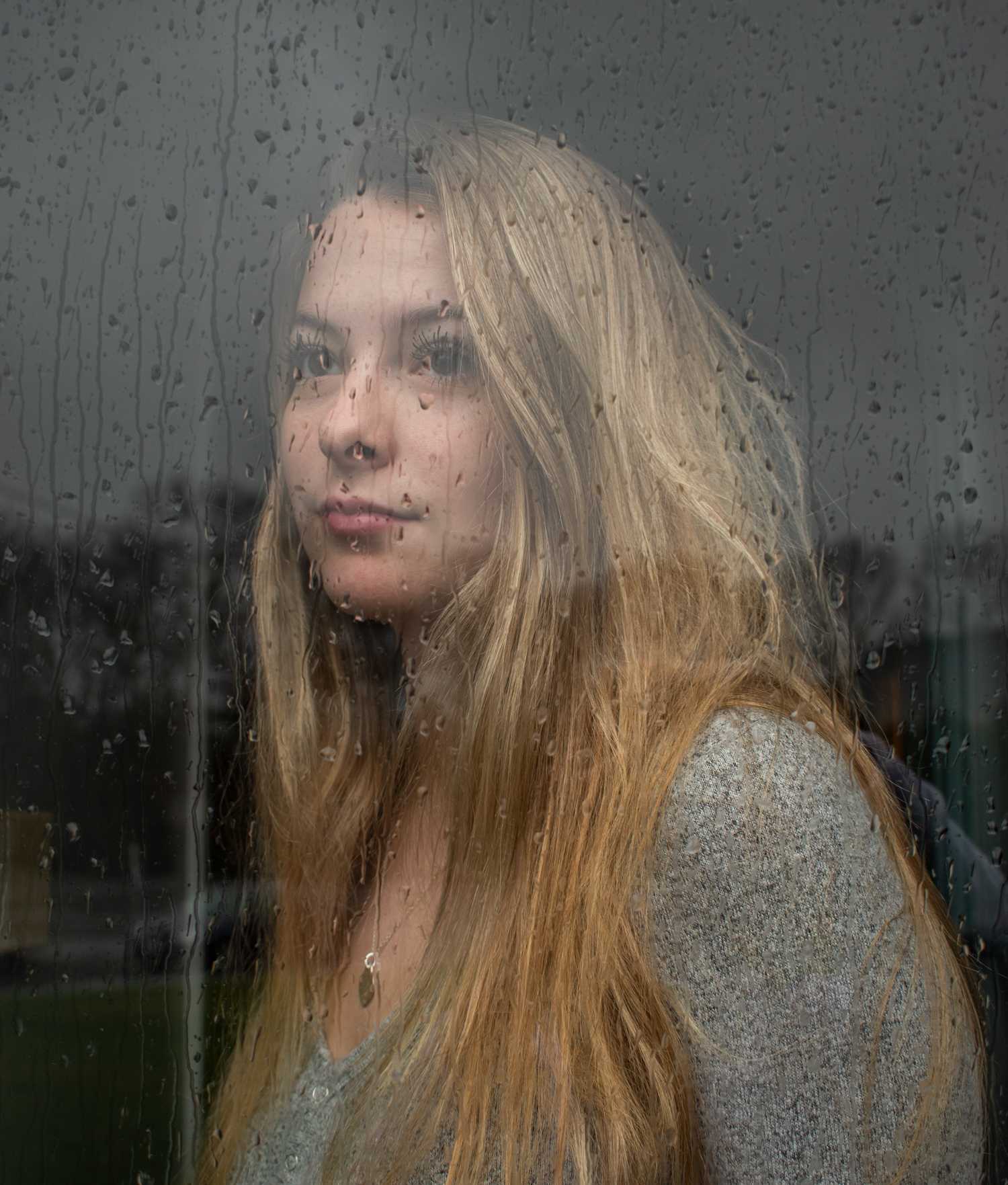 Taunton High School senior Caitlin Smith struggled to decide where to apply to and attend college. Smith has applied to eight schools this fall and has not been able to tour any in person. “I have to kind of guess what life is going to be like on that campus instead of actually being able to see the kind of people and type of events that go on,” Smith said. “The virtual tours have definitely impacted my decision more because, although everyone’s struggling, the schools have made it apparent to try to provide as much information as possible.” Paige Tolan/The Ithacan 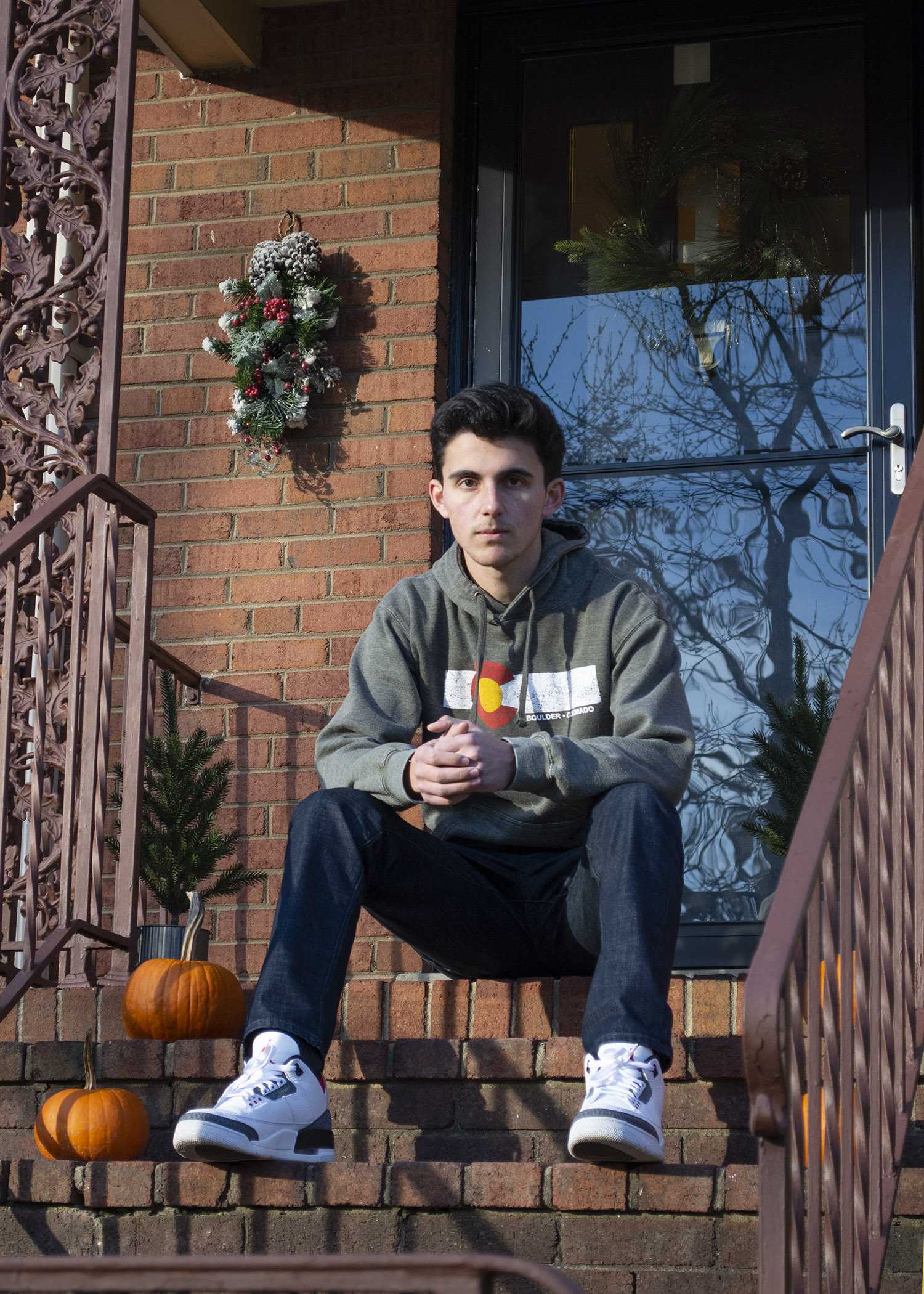 Tony Davis lives across the street from his high school in Arlington, Virginia. Ever since he was three years old, he would see high schoolers walking around the building, shooting hoops during lunch or studying outside. Davis is now a senior at Yorktown High School trying to balance the best parts of senior year with college applications and the overall workload brought upon by remote learning. “You have to be sympathetic and empathetic with what us rising college freshmen are going through,” Davis said. “This is literal hell for any student.” He is hoping that college admissions committees will be understanding with what students have been going through. “This is an entire senior year, not gone to waste, but limited to something that could’ve been much more useful and memorable. This is supposed to be one of the most exciting years of your life, for me, left in my basement.” Eleanor Kay/The Ithacan 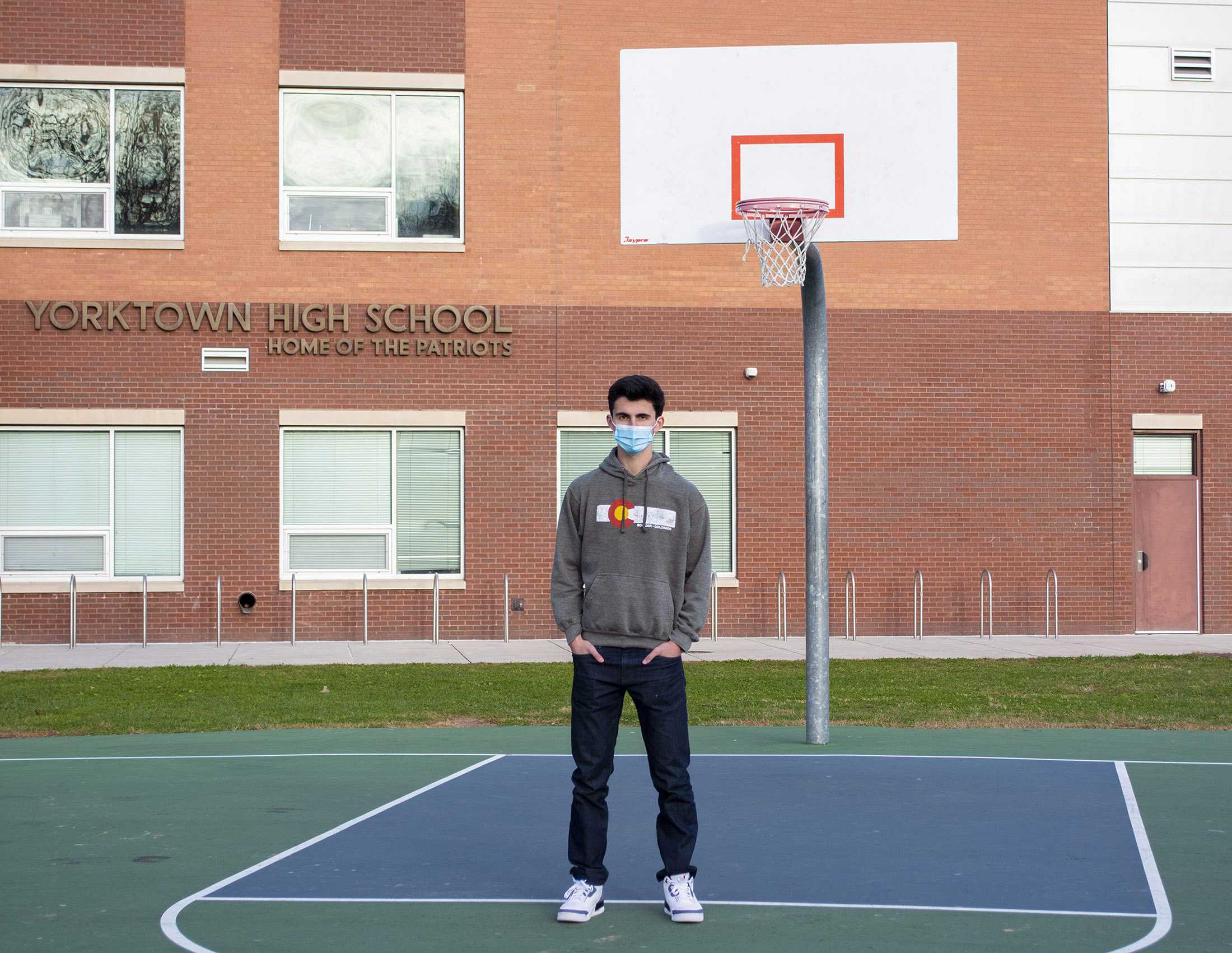 Davis has been on the varsity basketball team at Yorktown since his sophomore year. This year’s season is still happening, but it will look much different, including distancing of benches during games and limited indoor training. Although cases are still on the rise, Davis is still hoping for the best outcome of this season. “I am very optimistic for the upcoming season,” Davis said. “Yesterday, we had our first practice. The correct protocols were put in place to prevent the spread of the virus, yet players were still allowed to play without masks. I have worn my mask while playing and have used hand sanitizer during every water break to reduce the chance of transmission. Although I am always concerned about catching the virus, I am also very excited about getting back onto the court.” Eleanor Kay/The Ithacan 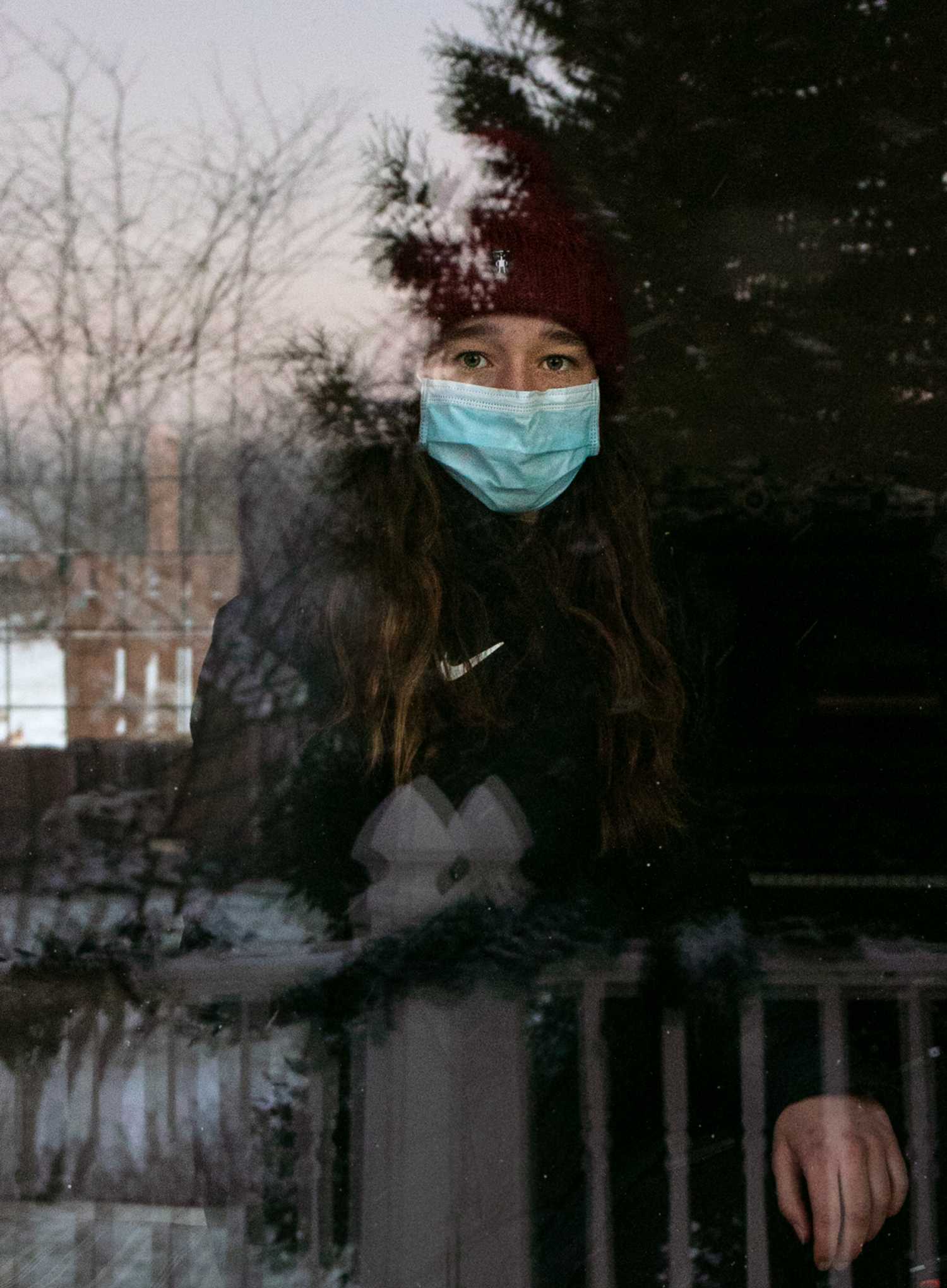 For Dryden High School senior Heidi Nydam, applying to college was relatively easy. She applied to just one school, Bates College in Lewiston, Maine, where she plans to study environmental science and compete on the soccer team. She visited the campus unofficially early in the fall while the Bates soccer coach gave Nydam and her family a makeshift tour over the phone. With college worries mostly out of the way, Nydam said she hopes for a relatively normal spring semester. “I’ve given up hope on things like prom and senior trips,” Nydam said. “I think those are gone. I just hope we can spend time with friends in small groups and go to school in person without too much worry.” Ash Bailot/The Ithacan 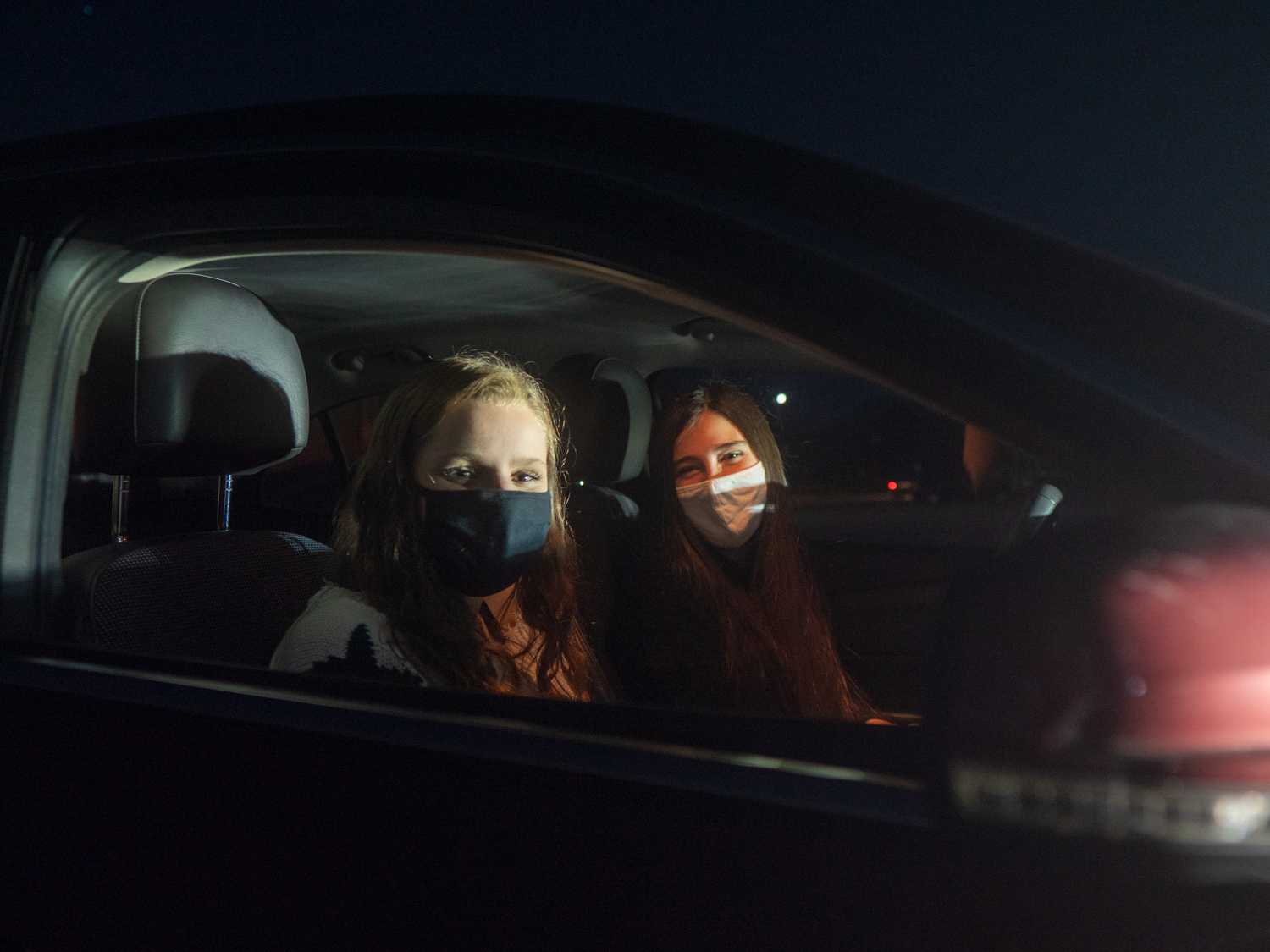 Longtime friends and high school seniors Anna Ferron and Gaylia Hecht sit in the parking lot at Hauppauge High School in Hauppauge, New York. “We can’t have any of our senior events,” Ferron said. “That’s probably my least favorite thing about this whole thing. Senior banquet, my senior gymnastics season — most of our events are livestreamed, which is annoying.” Lucas Cavanagh/The Ithacan 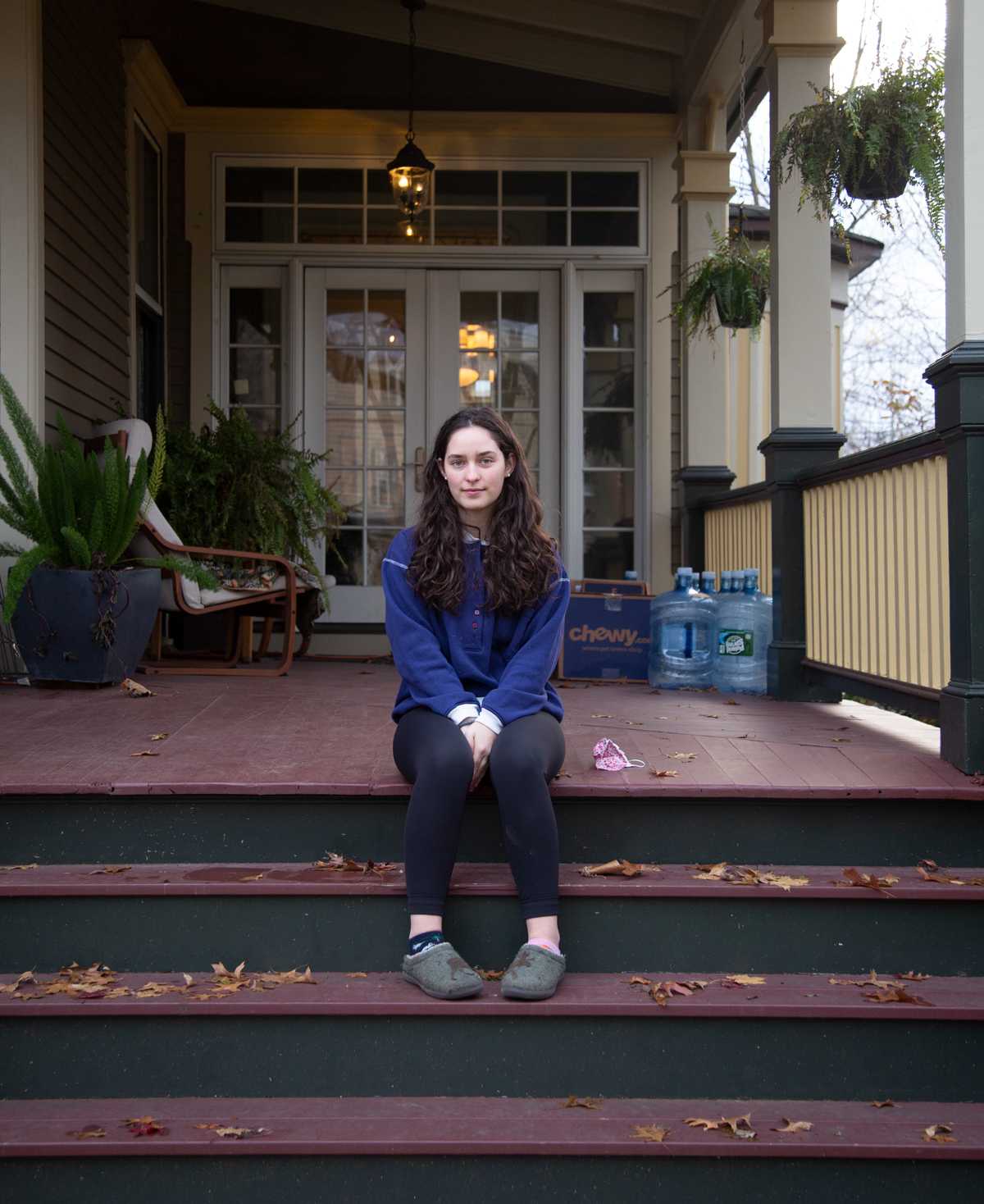 Scarlett Held, a senior at Montclair High School, is unsure of where she wants to attend college at the moment because she was only able to tour a small handful of the schools she applied to. “I had to apply to a wide range of schools just to make sure when I do find out what I want, if I ever do, I am prepared,” Held said. She said that she is considering taking a gap year or semester if classes are online in the fall. Held sits in front of her home, just a block away from her high school, in Montclair, New Jersey. Jill Ruthauser/The Ithacan 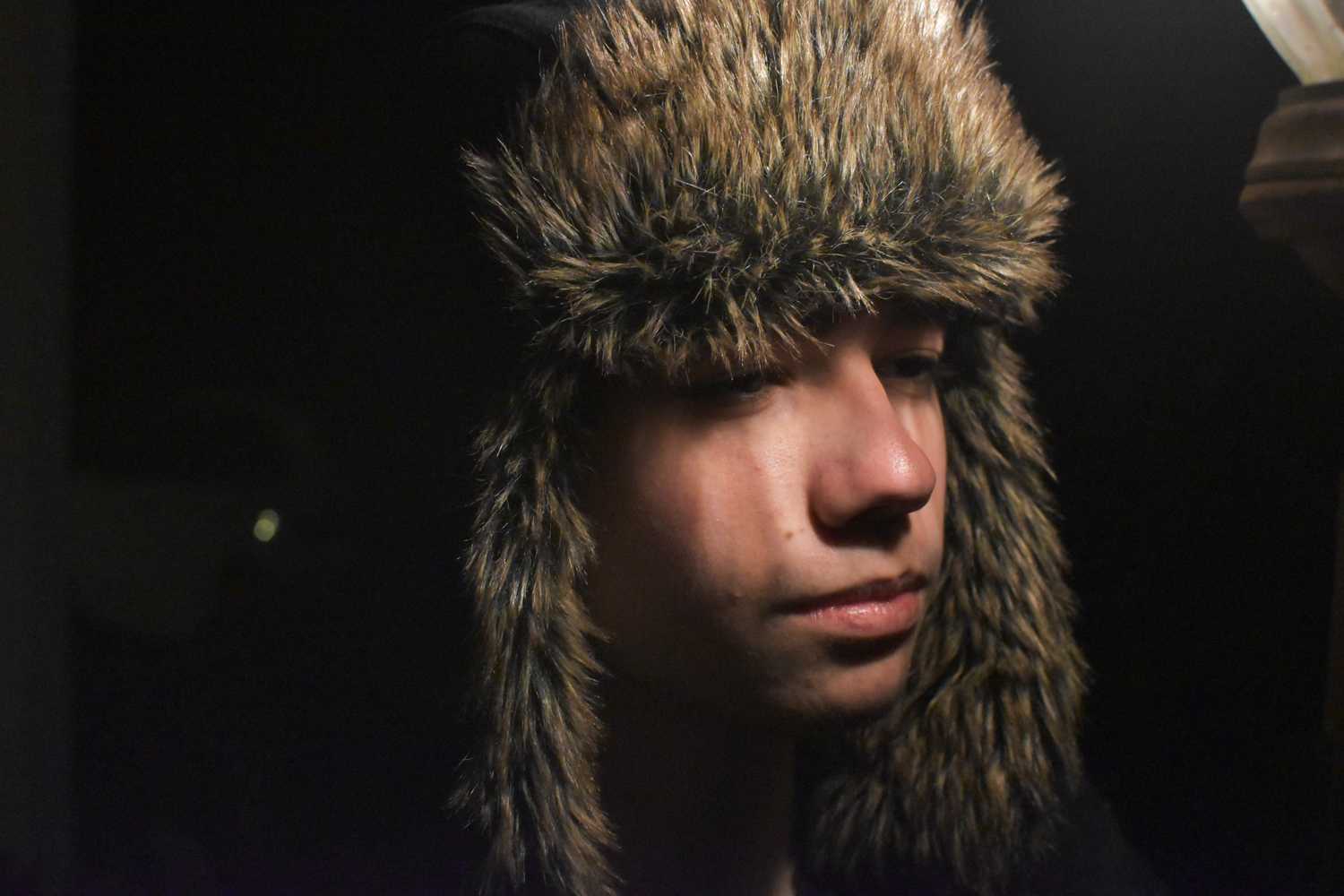 Nicholas Williams, a senior at Montgomery High School in New Jersey, sits in his front yard with his holiday decorations. Williams said that being the first to go to college in his family has made it difficult to get proper information, having to rely on guidance counselor meetings while they are swamped trying to get to every senior. “They’re answering to 500 kids and it’s only through emails and Google Meets,” he said. “Before, you could just walk into their office in the middle of lunch. … You have to plan a meeting a week ahead. … It’s an extremely annoying process.” Bec Legato/The Ithacan 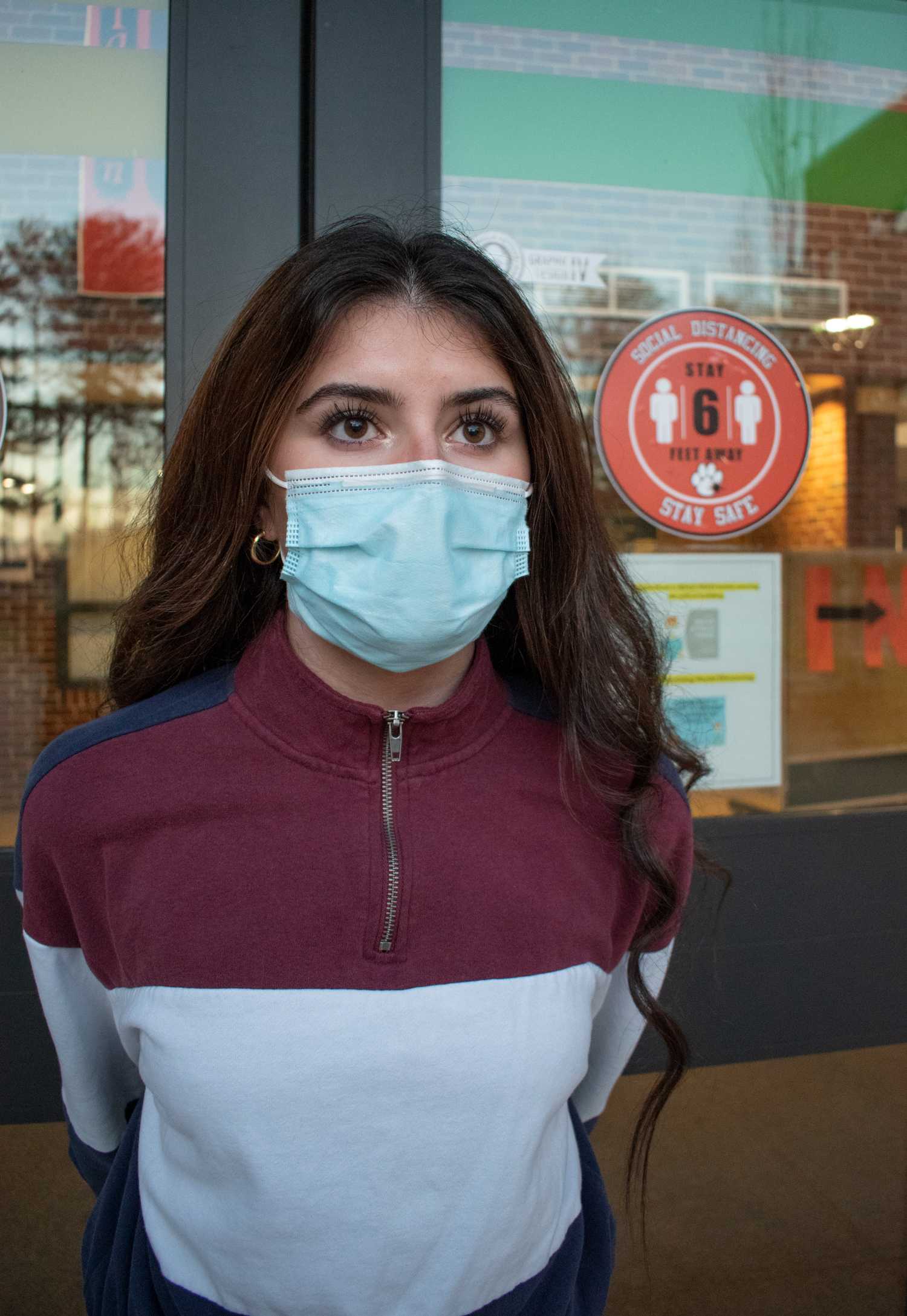 Emily O’Gara, Taunton High School senior and student council president, struggled with organizing events for the organization. Because the Taunton Board of Health does not allow in-person gatherings, O’Gara said its new virtual setting has resulted in less participation. “All of our meetings are virtual, which has been extremely difficult,” she said. “With participation, people are way more likely to go to a meeting in person than virtually. … It’s a fraction of the people that would come to a meeting last year.” Paige Tolan/The Ithacan

To Those Who Stayed

Costumes, candy and COVID-19: Halloween festivities adapt to the pandemic