The Apple Harvest Festival is one of the most popular attractions in Ithaca. Vendors from all over the Northeast come to sell baked goods, apple products and an array of handcrafted works to hundreds of customers each year. Last year, Apple Fest was held in a smaller capacity because of the pandemic and was called Apple Festive. There were no food trucks or craft vendors and there was a limited number of baked goods. This year, Apple Fest returned in full force with local Ithacans excited to wander The Commons and explore the numerous craft and food options available from Oct. 1 to 3, especially the highly desirable apple cider donuts. 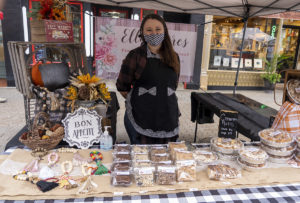 Apple Fest newcomer Samantha Hernandez stands behind a plethora of baked goods from her homestead business, Ella’s Acres, which she runs with her husband and 5-year-old daughter. The homestead specializes in bread and baked goods. It also sells eggs, chicken and other farm products at local farmers markets. Surina Belk-Gupta/The Ithacan 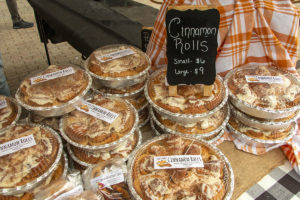 The freshly-baked goods attracted a lot of customers to their booth. “This is our first year which is really exciting and meeting all the people here. We’ve never done any events in Ithaca yet so it was nice to expand, meet this crowd and to get some new customers,” Hernandez said. Abby Brady/The Ithacan 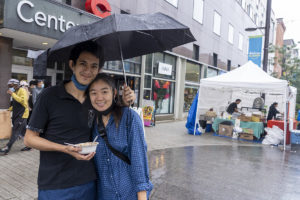 From left, Luke Forsman, Cornell University graduate student, and Cornell alum Stacy Wei ’21, huddle under their umbrella enjoying a warm apple crisp a la mode. Deterred from the massive line of the apple cider donuts stand, the two found another delicious replacement in food. Having missed the festival last year because of the pandemic, Wei said she loves seeing the vendors who sell their work and baked goods, and is glad Apple Fest happened this year. Surina Belk-Gupta/The Ithacan 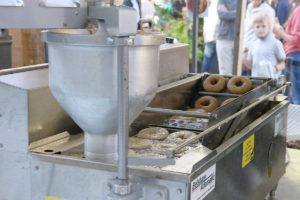 Littletree Orchards has been making and selling apple cider donuts at Apple Fest for approximately 15 years. For their highly anticipated donuts, they use freshly made pear and apple cider in the batter to get the best flavor possible. Malik Clement/The Ithacan 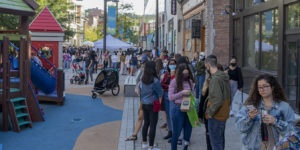 Littletree Orchards is a popular returning vendor at Apple Fest. They sell apples, freshly made cider donuts and gallons of apple cider. Each year, the line winds down The Commons with hungry customers waiting for their donuts. Katelin Bradley/The Ithacan 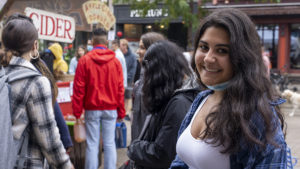 Cornell University senior Natalie Sullivan Baker stands in the pouring rain while waiting for the popular apple cider donuts. Just near the front, the time elapsed was approximately 45 minutes, but that did not deter her excitement. She said she is a big fan of the myriad food options and fair food available at Apple Fest each year. Surina Belk-Gupta/The Ithacan 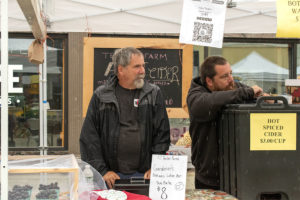 From left, Allan Teeter and his son Alex Teeter, man the A. J. Teeter Farm Stand, a historical treasure that has remained in the family for approximately 170 years. Last year, the Teeter Farm Stand was one of three farms that attended Apple Festive. This year, Allan Teeter said it was the best year compared with the previous festivals he has attended. “It’s really rewarding that we’ve done so much better than last year and years past,” Allan Teeter said. Nolan Saunders/The Ithacan 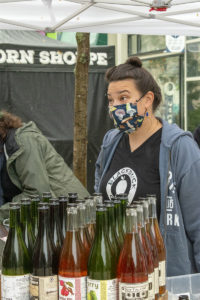 Jennifer McLafferty speaks with a customer at the Blackduck Cidery booth Oct. 3. McLafferty said although it was raining on the final day of Apple Fest, Blackduck Cidery has done better in sales this year than it did in 2019. “My expectation is that the college kids will brave the rain and come out and buy everything, and support our local vendors and they will have a fun time doing it,” McLafferty said. Nolan Saunders/The Ithacan 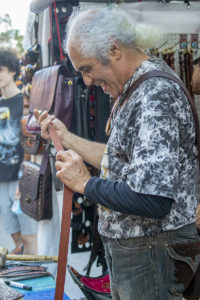 Joe Maurice Reboh prepares to design a belt at the Leather and Lace booth Oct. 2. Reboh has been attending Apple Fest in Ithaca for 10 years now. He makes all of his belts himself using domestic leather from the Midwest and uses metal stamps to make the designs on his belt. Reboh said he makes no two belts alike. Eleanor Kay/The Ithacan 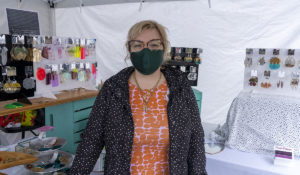 Elaan Greenfield, local metalsmith, jeweler and Apple Fest alum, is surrounded by her unique sets of earrings and accessories all of which she has made. This year marks her sixth year participating in the festival. Despite it being a slightly unusual festival year, she likes seeing all of the visitors and different people attending. Surina Belk-Gupta/The Ithacan 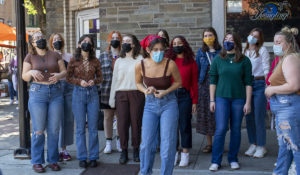 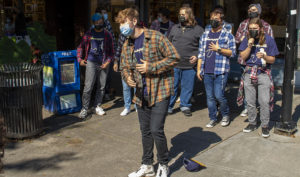 Ithacappella, one of Ithaca College’s a cappella groups, performs Oct. 2 on The Commons during Apple Fest. Katelin Bradley/The Ithacan 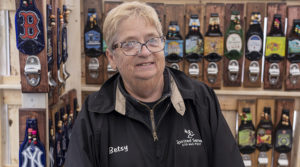 Artisan Betsy Sodon stands in her Apple Fest booth where she and her husband, Bud Sodon, sell different kinds of kiln-fired items. By reusing liquor bottles, they make plates, trays and wall decor bottle openers. Now in their seventh year at the festival, the Sodons are quite the experts and share a reminder to go check out all the hand crafted works at Apple Fest. Surina Belk-Gupta/The Ithacan 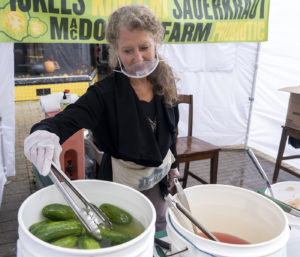 Roxanne Gupta fills in for off-the-grid farming friends who she refers to as “fixtures of the area” in this fermented food stand. Owners of the stand, Tom and Shelly McDonald, organically grow and pickle various vegetables like cucumbers and cabbage. Gupta quickly learned that 10:30 a.m. is never too early for pickles as Ithacan die-hards did not let business slow down too much. Surina Belk-Gupta/The Ithacan 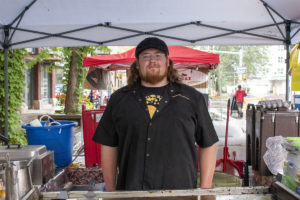 John Bean worked the potato pancakes booth Oct. 3, the final day of Apple Fest. Although it continued to rain, Bean was not too worried because he said Saturday was amazing. “We had a line of people reaching around our booth around to the back, and it was amazing to see people out and enjoying themselves,” Bean said. Although there are less food vendors at this year’s Apple Fest than previous years, Bean said he believes that everyone has done exceptionally well with sales this year, and is incredibly grateful for everyone that participated in Apple Fest. Nolan Saunders/The Ithacan

Getting Back to Business