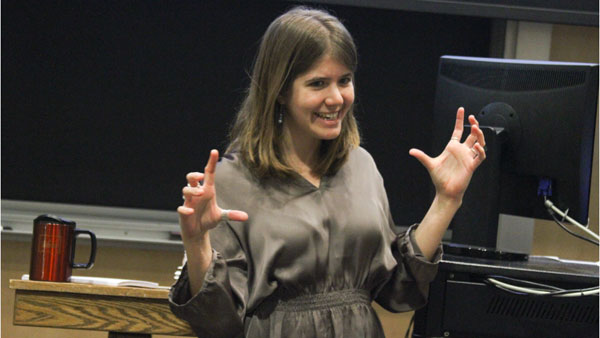 IC Greens hosted Rachel Briggs, a member of the Southern Utah Wilderness Alliance, on March 17 to speak about the ongoing struggle to classify and protect some of Utah’s public lands as wilderness and why the organization’s efforts matter to New Yorkers.

The Southern Utah Wilderness Alliance is currently working to legally classify 9.2 million acres of Utah’s land as wilderness under proposed legislation called the Red Rock Wilderness Act. According to the Wilderness Act of 1964, wilderness is an area unaltered by man, and “where man himself is a visitor who does not remain.” Furthermore, a wilderness must have “outstanding opportunities” for solitude and may include scientific, scenic or historical value. Designating an area as wilderness protects it from being developed.

Public lands are owned by all Americans and are meant to be available for public use, which is why Briggs said New Yorkers have a stake in re-classifying Utah’s public lands; it’s their land too. The government is responsible for maintaining these lands, and in Utah this responsibility primarily falls on the Bureau of Land Management, which Briggs said maintains about 22 million acres of land in Utah.

Briggs said the bureau surveyed Utah’s land in the 1980s, mostly using helicopters, to determine what parts of Utah’s public lands could be further classified as wilderness to protect them from oil and gas production and human development in general. It ultimately proposed 3 million acres for the designation.

Briggs said this was a poor evaluation because it did not include enough land. In response, she said, citizens conducted their own surveys, using more extensive examinations on the ground. These surveys came back with proposals varying between 5–9.2 million acres, and the Red Rock Wilderness Act was born.

The presentation began with a basic overview of the issue, followed by a 15 minute brief film about the Southern Utah Wilderness Alliance’s efforts and concluded with a question-and-answer session. Briggs handed out postcards voicing support of the Red Rock Wilderness Act to attendees that could be signed and sent to President Obama and New York Senator Chuck Schumer. Fewer than 10 people attended.

Because the Red Rock Wilderness Act regards public lands, Congress as a whole will decide the legislation. Briggs, one of several regional organizers in the alliance working on a state level, said she is speaking to representatives in New York because they play as equal of a role in this decision as Utah representatives.

Freshman Josh Kelly, IC Greens chairperson, related the issue of why New Yorkers should care about Utah to a petition the club recently launched to ban plastic bags and water bottles on campus, which has signatures from people outside the college.

“Someone asked me, ‘Well, don’t you think they should be from Ithaca College?’” Kelly said. “I said no. Anytime that the environment is in any way affected by humans, it affects the whole world … and that is much bigger than any one individual place. It’s our responsibility to protect the whole planet.”

Freshman Emily Garfinkel, IC Greens treasurer, has visited Utah before and said being exposed to Western landscapes helped deepen her appreciation for nature.

“Going there really gave me a perception of different landscapes that the U.S. has to offer,” Garfinkel said. “It’s really important to support other parts of the country as well; just because we’re in New York doesn’t mean that we only have to support issues in New York.”

Briggs said it is important to protect Utah’s land because, apart from Alaska, vast stretches of undeveloped land are rare in the United States.

“There is so much land [in Utah], and you could spend a lifetime and not see everything you want to see there,” she said. “If we don’t stand up and if we don’t put in some effort, that’s not going to be there into the future.”

Kelly said IC Greens will continue to invite guest speakers, including Howie Hawkins, the Green Party candidate for governor of New York, later in the semester.