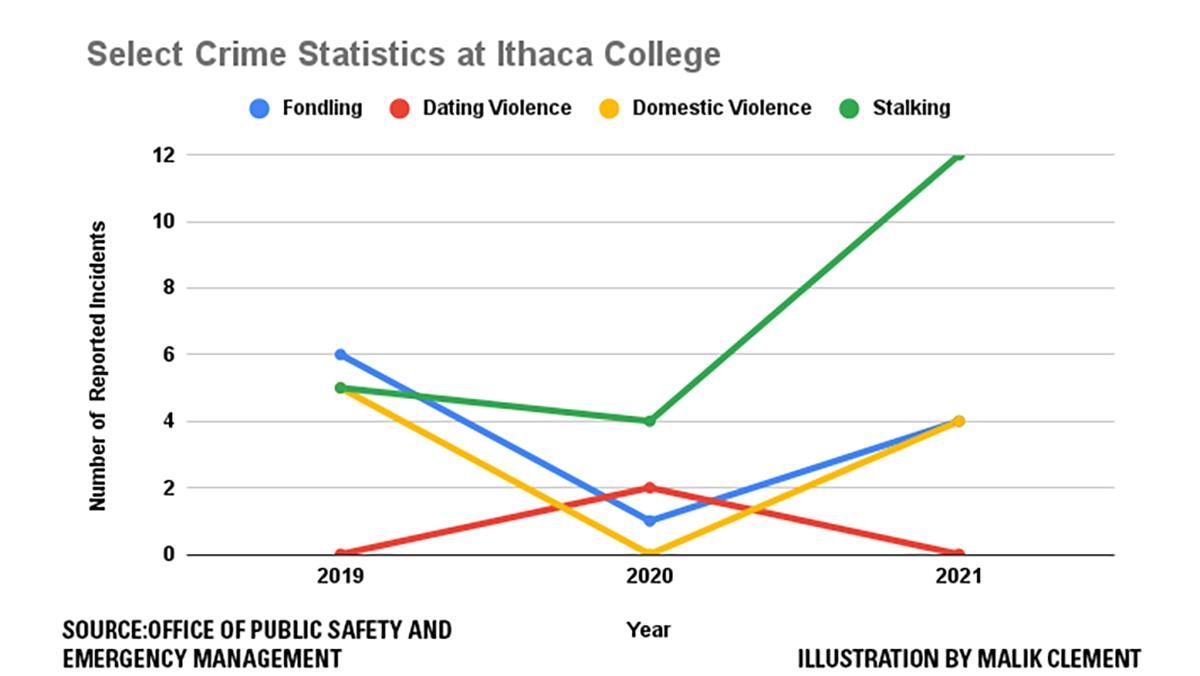 At Ithaca College in 2021, there were increased reports of domestic violence, stalking, aggravated assault and fondling, as well as a decrease in reports of rape and dating violence according to the 2022 Annual Security & Fire Safety Report (ASFSR).

The ASFSR is published annually to display campus crime statistics from the past three years. Additionally, the report includes resources, crime definitions and policies. The 2022 ASFSR was released Sept. 27 and the campus community was notified with an email from Elyse Nepa, assistant director of the Clery Act and Prevention Education in the Office of Public Safety and Emergency Management.

There were five reports of stalking in 2019, four in 2020 and 12 in 2021. Stalking is defined in the ASFSR as “engaging in a course of conduct directed at a specific person that would cause a reasonable person to (a) fear for their safety or the safety of others or (b) suffer substantial emotional distress.”

Title IX Coordinator Linda Koenig said that after seeing an increase in reports of stalking, she and Nepa both attended a training session that gave them more information about identifying stalking behavior and helping the community identify that behavior. Koenig said a major challenge with identifying stalking is that sometimes it looks like harassment, which is not necessarily a crime, although it can be.

“Just from a safety perspective, stalking is a much more dangerous behavior than harassment,” Koenig said. “So, being able to be more effective at identifying the attributes that are attached to stalking will help us have a safer community. That’s why being able to classify it [is important] so that we respond to it appropriately.”

A service provided by the Office of Public Safety to prevent criminal offenses on campus is the Safe Escort Program, which allows a member of the campus community to be accompanied by an officer to and from any campus location. According to data collected by Crystal Young, administrative operations coordinator in the Office of Public Safety, the requests for escort services by a campus officer have significantly decreased since 2019. There were 215 escorts provided in the 2019–20 academic year, 35 in 2020–21, 48 in 2021–22 and as of Oct. 5, 22 escorts have been provided for the 2022–23 academic year.

First-year student Simon Stainbrook said he is a little surprised that there are cases of stalking on campus at all.

“I personally feel [safe on campus],” Stainbrook said. “I obviously have some privilege in that regard. [Stalking] is definitely not talked about enough considering how often it happens.”

Koenig said less reports of sexual violence are more concerning because that would show not a decrease in the behavior, but decreased understanding or ability for victims to report.

“If we don’t have any reports, like of sexual assault, as an example, I am going to be incredibly concerned, because we know there’s a high prevalence of sexual assault on college campuses,” Koenig said. “If something goes to zero [cases], that would be really odd. It would make me question, like, ‘do we need to refocus some of our prevention efforts toward this particular topic?’ Because maybe people just don’t understand what it is and so they don’t think that it’s reportable.”

Domestic violence was reported five times in 2019, never in 2020 and four times in 2021. In 2019, there were no cases of dating violence, two reports in 2020 and in 2021, it dropped back to zero. Nepa said she understands why the data for domestic and dating violence may be confusing because of the nuance of how they are classified.

The state definitions of domestic violence and dating violence are not differentiated from each other. However, there are separate definitions within the federal Violence Against Women Act (VAWA) — which are both included in the ASFSR.

Koenig said that when reports are made by members of the campus community about Title IX violations, if the victim does not want to participate in an investigation, the case is classified as whatever the report stated. However, if Title IX or other criminal offenses are reported and there is an investigation where further information about the details of the offense are discovered, Nepa said the case is classified per the New York state law or by federal law if the state does not have a definition, like for dating violence.

“That’s the other challenge with these numbers,” Koenig said. “[Title IX Office] are not always able to determine if it’s classified appropriately. … Sometimes people misclassify [cases] themselves because … maybe there’s a gap in our shared communication.”

Nepa attributed the decrease in 2021 drug violations from prior years like 2019 to marijuana being legalized in New York state March 31. So, any student over the age of 21 who was reported using marijuana in 2021 was referred to the Office of Student Conduct per the campus regulations that follow federal standards rather than being referred for unlawful possession of marijuana.

“When New York state updated the laws around cannabis and marijuana use, we understandably saw a decrease in our numbers,” Nepa said. “It’s not to say that students aren’t using marijuana and cannabis. It’s just that many of them that are using it might be above the age of 21, which is no longer a violation of law. … Same with alcohol.”

Nepa also mentioned the inconsistency of data points because of the COVID-19 pandemic and students not being on campus for most of 2020.

“One thing with the data and even when I was plugging in the data, we see this swing and the shift in our numbers,” Nepa said. “It’s hard because, taking into consideration 2020 and really most of 2021, we didn’t have a full campus [because of the COVID-19 pandemic].”

Tom Dunn, associate director and deputy chief in the Office of Public Safety and Emergency Management, said via email that the ASFSR is a good resource to compare crime statistics at the college to other campuses in the United States.