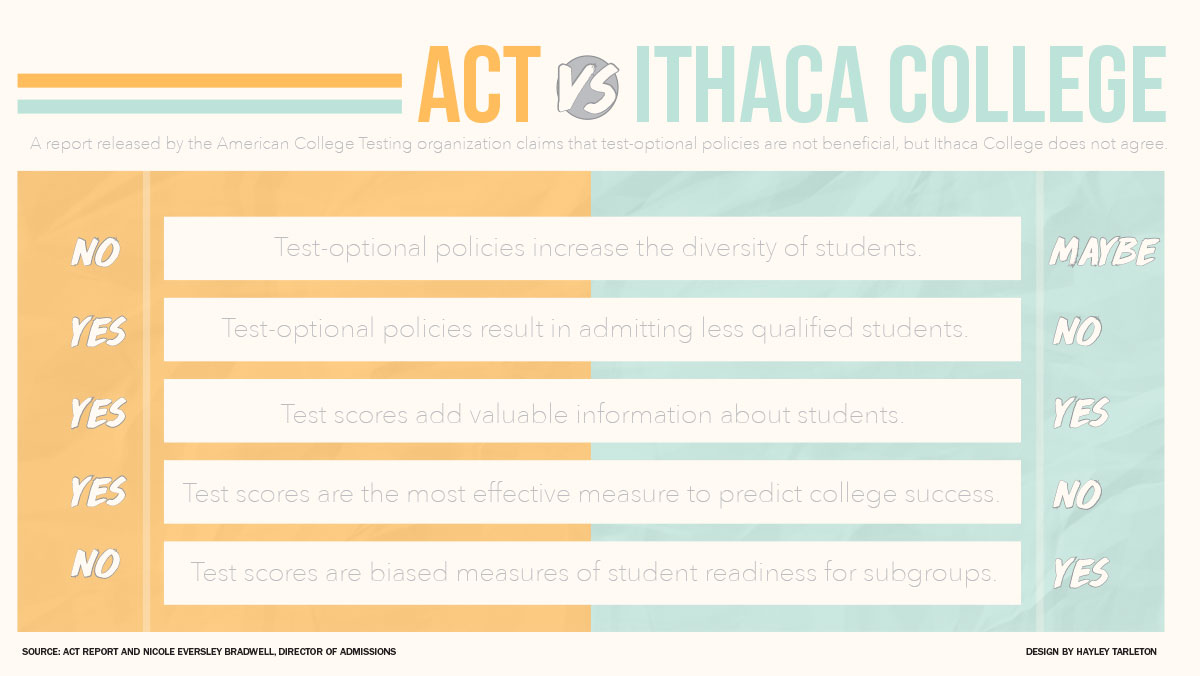 Hayley Tarleton/The Ithacan
The ACT released a report stating that test-optional policies are not beneficial for the colleges that use them but Ithaca College disagrees.
By Sierra Guardiola — Staff Writer
Published: October 30, 2016

A report released by the ACT program in late September asserted that test-optional admission policies at colleges and universities are not beneficial. However, Ithaca College administrators, faculty and students said test-optional policies at the college have been worthwhile.

The report released by the ACT in September found that test-optional policies do not increase the diversity of students, standardized tests are not biased measures of academic readiness for underserved students and test-optional policies result in admitting less–qualified students — all points that test optional–policy schools dispute. The report also found that test scores add additional information beyond high school GPA and are predictive of college success beyond a student’s first year.

In 2008, the National Association for College Admission Counseling (NACAC) released a report stating colleges should emphasize testing less and focus on the holistic view of a student, but the ACT report insists otherwise. After the NACAC report was released, the college conducted research in 2009 and found there was a higher correlation to predict students’ success by their high school GPA, said Nicole Eversley Bradwell, director of admission at the college. The college used this information to switch to a test-optional policy, which was implemented in 2013, she said.

Eversley Bradwell said the college saw benefits that the ACT report states are not true. She said the college has seen a consistent increase each year in diversity of historically underrepresented groups, though she said she cannot attribute it directly to being test-optional. She said the college still has the same standards for GPA and high school rank, but only takes into account test scores if they are provided. Eversley Bradwell also said that though test scores add beneficial information about students in some cases, she thinks it is an inaccurate representation of the potential for success for other students.

“We have always put a primary focus on a student’s day–to–day academic success over the four years of your secondary education,” she said.

Despite the new research, Eversley Bradwell said she feels confident in the process the college went through to become a test-optional school.

“We will continue as we move forward to assess and determine … is it working well for us, and so far it is,” Eversley Bradwell said.

“We’re just not seeing this sweeping change within the sector to say… that this is one way that colleges can make huge steps to expand access,” Ochs Rosinger said.

She said it is up to each school to evaluate its programs to see if a test-optional policy works for its particular campus.

James Pfrehm, assistant professor in the Department Modern Languages and Literatures, said tests are skill-based pictures of students and that they cater more toward certain people than others. He said in his classes, he never gives students their grades based on exams alone.

“I agree with Ithaca College’s policy that there is more to a student than just their test scores,” Pfrehm said.

Paula Turkon, assistant professor in the Department of Environmental Studies and Sciences, said test scores should not be the only measure looked at for admission, especially if the student thrives in other aspects of academics.

“Ithaca College is very concerned with different learning styles, and if that’s something that we want to emphasize as part of our identity, I think we almost have to continue the policy that is existing right now,” Turkon said.

Sophomore Abigail Sullivan said being test-optional is probably a big draw for many prospective students. Sullivan said she disagrees with the idea of basing a final grade on an exam, which does not benefit people who don’t test well.

“Testing is a very narrow way of figuring out how smart you are,” she said.

Freshman Gabrielle Picca said she took advantage of the test-optional policy offered by the college because she did not think that her test scores reflected who she was as a student. Once she was admitted to the college, she said, she was a finalist for the Park Scholar program and that her work ethic has carried over in her classes.

“I felt like Ithaca focused more on my extracurriculars and looked at more than just a grade,” Picca said. “In the end, it’s about what I’m going to do for this campus.”

Students are now able to change their majors through an online process rather than a series of signatures and paper forms.

This month, the council received an update on the Academic Workflow Implementation Group project and discussed moving the date for submitting final grades.