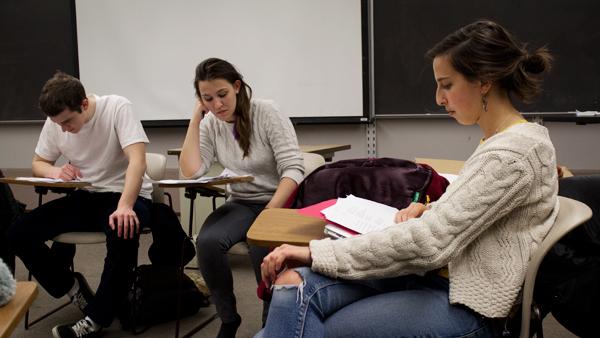 This new student-run publication will feature writing and artwork related to mental health by students and community members for students.

The aim of the magazine is to extend the supportive community of Active Minds and Speak Your Mind panels, which bring experts on mental health to speak in classes, residence halls and student organizations, and create dialogue. Active Minds will distribute the magazines around campus and after SYM panels.

According to the Suicide Prevention Resource Center, one-fifth of college students experience a mental illness.

Senior Emily Nowels, writing editor of the magazine, approached the board of Active Minds two years ago with the idea of creating a literary arts magazine to support the SYM panels, but because she was studying abroad, the project was not developed until now. She said the idea came from her own experience suffering mild depression and anxiety as a freshman. Writing helped her cope with her depression, she said.

“The magazine will help [people] feel comfortable and sort of break down that stigma and embarrassment that often comes with mental illness and allow people to feel more open to getting help,” Nowels said.

Senior Danielle West, president of Active Minds, said students often respond well to the panels, asking the speakers questions and starting conversations, but many have no way to stay involved afterward.

“Once they leave the panel, they don’t really have any outlet to learn more about it or look more into resources,” West said. “There’s a creative side to that. [Nowels] thought that creating a literary arts magazine focusing on mental health would be a vehicle to put out the information beyond the panels.”

The magazine is expected to publish one edition this year. The editors plan to send the final copy to press by winter break and distribute it next semester, printing more copies as needed. If there is more demand, the magazine may be produced on a semester basis rather than yearly.

The Mirror will feature the creative work of at least 25 people, including college students, a student at New Roots Charter School and one alumna. West said the group producing the magazine is made up of about half returning Active Minds members and half new participants.

Art editor Anika Steppe said the magazine will be accepting submissions of writing and art until Sunday.

“We have one informative article about the resources on and off campus, and then the rest is poetry, fiction, nonfiction, personal narratives, and then we have paintings, drawings [and] photographs,” Steppe said.

West said the magazine will be both informative and artistic.

“It’s about creating extensions. It’s all personal stories, poems, but it will also have ads in it for the Tompkins County Crisis Hotline and things like that,” West said.

Financial support for the effort comes from a grant from the national umbrella organization of Active Minds and Kickstarter, a grassroots fundraising website. Because The Mirror is not a separate student organization, Active Minds also plans on applying on behalf of the magazine for funds from the Student Government Association.

Junior Brittany Carey, a psychology and drama major pursuing a career in therapy, said she hopes the magazine’s focus on sparking dialogue about mental health can create effective change despite barriers.

“Mental health is a part of everybody’s life, but some people still see it as irrelevant,” Carey said. “So it depends on how well the magazine is able to target the student body.”

Carey said she thinks most students do not know about the full extent of available resources offered on campus, in and beyond the Center for Counseling and Psychological Services. But the greatest barrier is the ever-constant stigma around any conversation about mental health.

“All the different stigmas are still around mental health,” Carey said. “If people know about [available resources], they don’t go because of the stigma around mental health. I think addressing that stigma is the most important thing for the magazine to do.”

Steppe said demand for a publication like this one already exists.

“[The magazine] is a place for these narratives to come together, so it’s a collective experience if you are an individual struggling with your mental health,” Steppe said.

To write for the magazine, contact the editors at themirrormagazine1@gmail.com. Mirror Magazine meets on Tuesdays at 6 p.m. in Williams 202. Active Minds meets on Thursdays at noon in Williams 222.