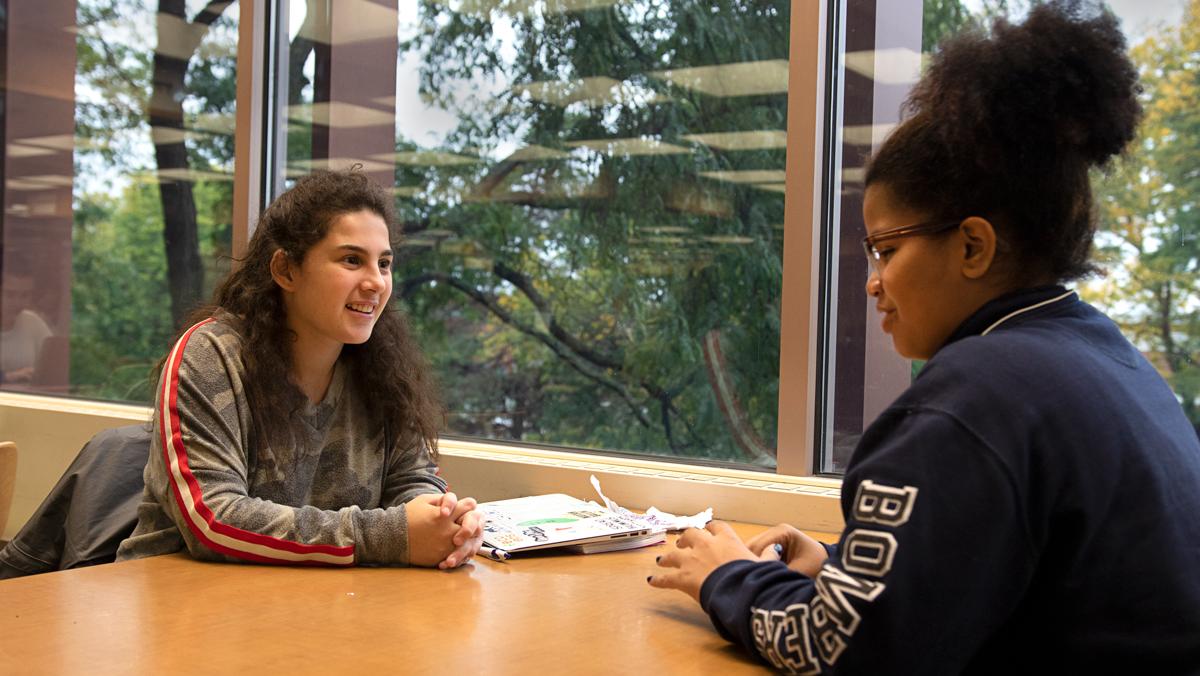 Freshman Sherleen Vargas said she was overwhelmed with the transition to Ithaca College at the beginning of the school year. However, her nerves were calmed when she met with her ambassador, sophomore Kaitlyn Katz, for the first time in September. They talked for an hour about Vargas’ academic and social life as well as their common interest: the occupational therapy major.

The Ithaca Ambassador Program, currently in its third semester, serves to guide freshman students as they transition from high school to college. This is the first year the program allows freshmen to sign up for ambassadors in their majors or minors to help them with time management, stress and workload management.

Vargas said she signed up for an ambassador so she could have support when transitioning into college.

“As a first-generation college student, I thought that it would be good to have some extra support,” she said. “I’m looking to do well and someone who I can express my stress to because sometimes there are things you can’t really tell your friends.”

This year, 17 ambassadors are currently guiding 61 freshmen who signed up for the program. Senior Kristin Butler, one of the cofounders and copresidents of the ambassador program, said the freshmen meet with their ambassadors over the course of their first year to find out more about the academic, social and mental health resources offered on campus and to discuss any issues transitioning to college.

The ambassadors also have drop-in hours every day at locations across campus. Upperclassmen must apply to become an ambassador.

This year, senior Sarah Horbacewicz, another cofounder and copresident of the organization, along with Butler led the program through changes to improve the experiences of freshmen and ambassadors alike.

One of the changes included setting up a booth at orientation and at the student organization fair for freshmen to sign up if they wanted to be matched with ambassadors. Butler said that in the past, all freshmen had ambassadors regardless of whether or not they needed one.

“A lot of students either weren’t interested or didn’t need an ambassador,” Butler said. “This year, we had sign-ups for incoming freshmen who wanted to be matched with an ambassador, so there’s more retention.”

Sophomore Sarah Knapp, program officer of the organization, said she focuses on outreach for the organization. She said she is trying to work with the Office of Career Services so more freshmen can utilize the program’s resources.

In addition, all ambassadors will complete the SafeTALK Training with the Center for Counseling and Psychological Services. The training will equip ambassadors with the necessary skills to recognize the signs of suicidal thoughts and to connect individuals with community resources for suicide intervention.

“The SafeTALK trainings are really helpful in discussing mental health awareness,” Butler said. “So ambassadors can identify what freshmen are going through to find the right resources to help out.”

McCown said she hopes that down the road the program will have more ambassadors to reach out and help more students.

“It’s a beneficial program to have for students, especially in specific schools where there’s high pressure for performance,” McCown said. “Sometimes, they need someone there that can say, ‘Hey, I’ve been there before. Here’s how I made it through.’”

Katz said she sees herself as both a mentor and a friend to the freshman students she works with.

“I really like connecting with people,” Katz said. “I was looking for a place where I could help people who were in a similar situation I was in last year.”

Junior Annie Altwarg, an ambassador, said she enjoys acting as a resource to freshman students.

“I always found that mentorships were helpful, especially when I was arriving in college,” Altwarg said. “I want to be able to give back and to be able to serve as a resource from what I’ve learned.”

Freshman Angelica Otero said she values the conversations she has had with Altwarg, her ambassador.

“I have someone to talk to about my classes,” Otero said. “I’ve learned to just relax and to not stress too much because you’ll figure out what you want to do eventually.”