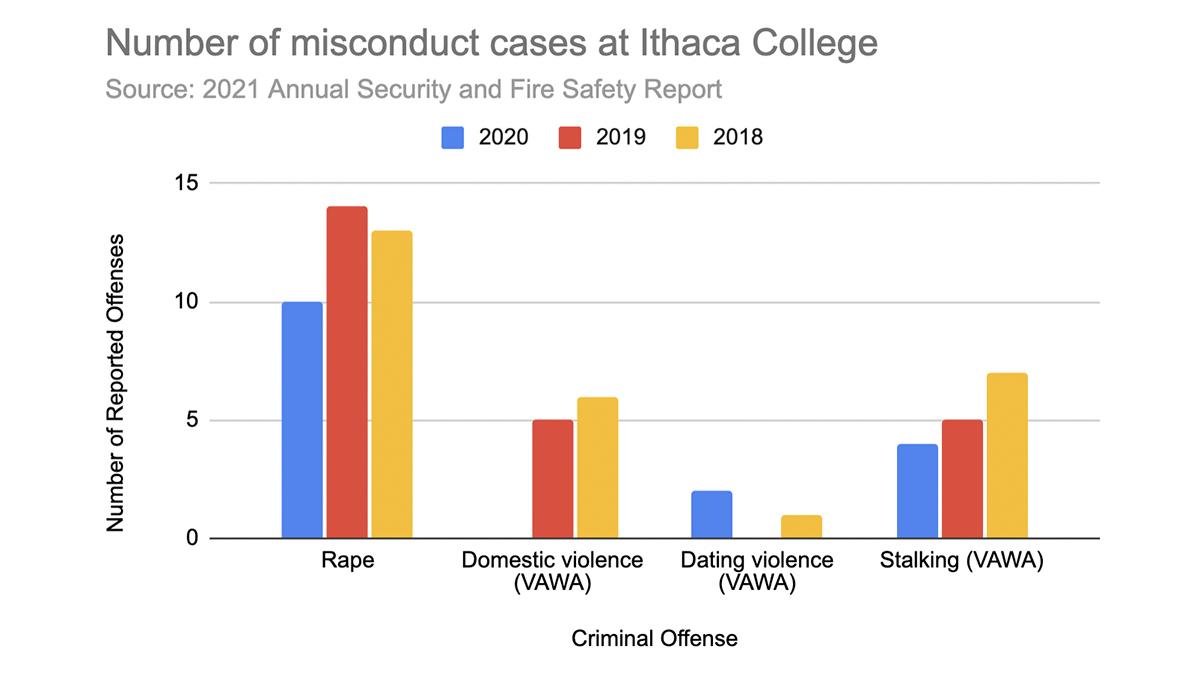 The 2021 Ithaca College Annual Fire and Safety Report shows that, despite the COVID-19 pandemic causing students to remain at home for part of the 2019–20 and 2020–21 academic years, the number of Violence Against Women Act (VAWA) offenses and reports of rape have remained close to previous years.

There were 13 reported cases of rape in 2018, 14 in 2019 and 10 in 2020. The report defines rape as any degree of unconsensual penetration in the vagina, anus with a body part or object. It is also defined as nonconsensual penetration in the mouth with the sex organ of another person.  All reported rapes in 2020 occurred in on-campus student housing. The report, released Sept. 29, includes data from the 2018 calendar year through the 2020 calendar year. However, most students were only on campus between Jan. 21 and March 6, 2020 during the spring semester as a result of the COVID-19 pandemic. Students were not on campus during Fall 2020  as well, but there were a number of students who were allowed to live on campus because of extenuating circumstances.

Title IX Coordinator Linda Koenig said reports of VAWA offenses and rape are often not reported immediately after the offense takes place. She said because of that, reports made to the Title IX office during 2020 do not necessarily mean the offense or rape happened during that year. However, she said it is possible.

Koenig also said she is proud that the college was able to help provide resources like Title IX and the Tompkins County Advocacy Center throughout remote learning.

“People experience violence on a daily basis so I really do attribute the numbers to just more knowledge and more information,” Koenig said.

Koenig said the dating violence numbers in the report were very high as well.

“I think we saw that nationally too, right, that people were experiencing domestic and dating violence at higher rates because we all became isolated,” she said.

According to the Centers for Disease Control and Prevention (CDC) about one in five women and one and seven men have experienced severe physical intimate partner violence (IPV) in their lifetime. About one in five women and one in 12 men have experienced sexual IPV. The CDC reports that the COVID-19 pandemic increased the risk of domestic violence through different means of abuse such as intentional exposure to COVID-19, financial abuse and withholding protective equipment or means of communication.

“It’s really hard to report but people will believe you,” Sayer said. “No matter how miniscule you may think that your sexual assault, harassment, rape, whatever happened, no matter how much you may think it is insignificant, it is significant and you deserve justice.”

The number of stalking cases have remained relatively consistent with a slight downwards trend between 2018 and 2020. In 2018 there were seven cases, five in 2019 and four in 2020. However, fondling cases dropped from six in 2019 to one in 2020. The report defines fondling as the nonconsensual touching of private body parts of another person for sexual gratification.

Koenig said she wants students to understand that if they make a Title IX report it would remain within the college’s Office of Public Safety and would not lead to local police intervention unless the student asks for it.

“It really just means that you give the college information and that gives the college an opportunity to offer support and resources,” Koenig said. “You can report things that don’t fall into the categories listed and the college wants to hear them and wants to respond to them, and they are impactful too.”

Elyse Nepa, Clery Act and crime prevention coordinator in the Department of Public Safety and Emergency Management, said there are additions every year to the report. She said for the 2021 report there is new information about COVID-19 safety, and the form for registering a confidential contact is now located in the housing portal in HomerConnect. In the past the procedure was done during the admissions process and the form could be found on the Office of the Registrar website page. New York legalized marijuana use and the penal law on marijuana possession has been updated as well.

“It is never our goal to arrest anyone for anything,” Nepa said. “The goal is to educate which is why you see more disciplinary referrals because that’s an educational based system.”

Drug violations are defined as the production, sale, purchase or use of certain substances as well as any equipment owned for production or use. Liquor violations occur from the production, sale, purchase, transport or possession of alcohol. There was a decrease in drug law violations that led to disciplinary referrals from 203 in 2019 to 29 in 2020. Similarly the liquor law violation referrals dropped from 232 in 2019 to 90 in 2020. There were no arrests in 2020 for weapon, drug or liquor violations. In both 2019 and 2020 there were four on-campus burglary offenses and one on-campus robbery offense.