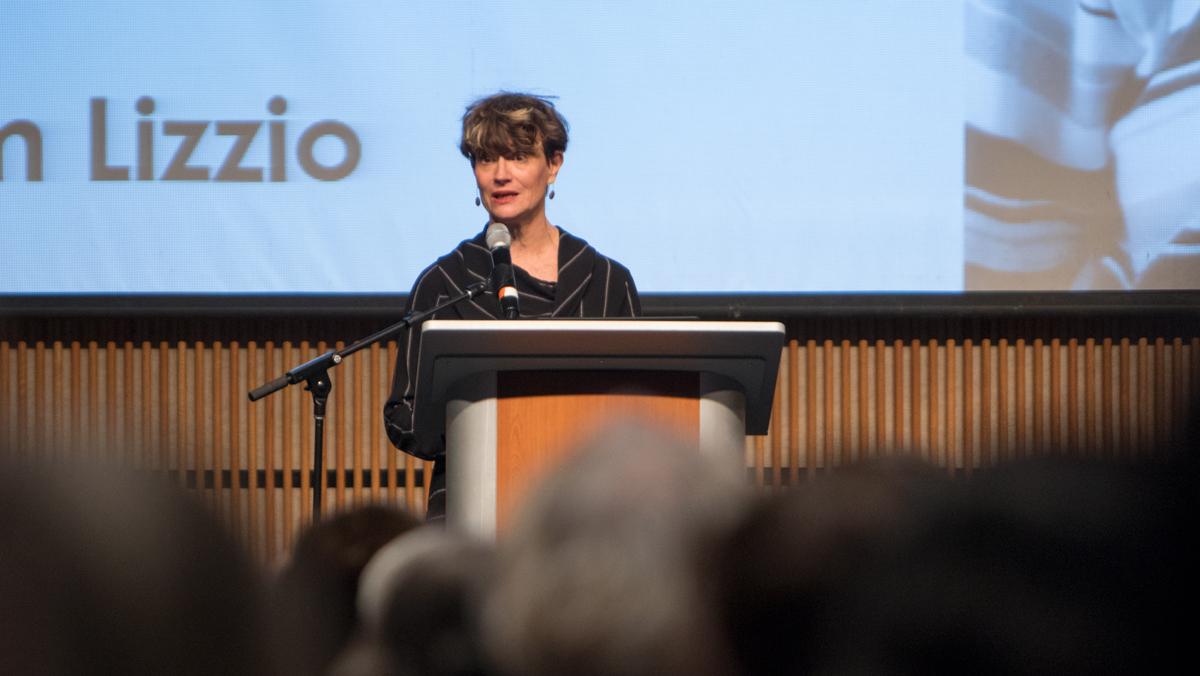 Speaker and author Ashton Applewhite spoke at Ithaca College about how ageism is a type of discrimination as relevant as racism and sexism Oct. 23.

The anti-ageism activist wrote the book “This Chair Rocks: A Manifesto Against Ageism” and is a leading spokesperson in the movement against discrimination on basis of age. Students, professors and residents from local independent living centers filled Emerson Suites to listen to her distinguished speaker presentation on the barriers of ageism as part of the Gerontology Institute Speaker Series. Applewhite defined ageism as the discrimination and stereotyping on basis of age.

During her presentation, Applewhite said age should be a criteria for diversity. She mentioned that when society fights discrimination comprised of ageism, sexism and racism, it can weaken each -ism because they are interrelated.

“When we chip away at the bases for any of them, we weaken the foundation for all of them,” Applewhite said.

“We need to reject the zero-sum reasoning that pits the old against the young,” she said.

Applewhite also discussed the internal prejudices of ageism and her own experiences with being ageist or facing ageism.

“In this society, we see old age only through the lens of loss,” Applewhite said. “From the outside, what we lose as we age is more obvious than what we gain.”

Applewhite explained how she believes age is a social construct. She said people assign meaning to how society looks and acts according to a person’s age. Society has put an emphasis on looking young with anti-aging creams and hair dye, she said, but society has decided what people should look like based on their age.

She presented statistics emphasizing that not all people over 65 years old are immobile or completely dependent. Applewhite said only 4 percent of people over 65 live in nursing homes.

“Unless we challenge the underlying message that to age is to lose value as a human being, it becomes part of our identity,” she said.

Prior to the event, members of the Ithaca community held a weekly book talk on Applewhite’s book. Bonnie Brown, community member at Titus Towers, participated in the book talk and said she believes that ageism affects people today.

Brown said the book and the talk taught her to pay attention to the things she says that could perpetuate ageism.

“My mother always told me that if you learn something new and different every day, then you’re living,” Brown said.

Sophomore Stetson Doggett attended the presentation for a class, and said he was surprised how applicable the talk was to his life. He said ageism seems to go hand-in-hand with sexism and racism.

“It’s kind of another way of unfairly judging people, and I think to really progress forward as a society, we would need to eliminate these forms of judgement,” Doggett said.

Teri Reinemann, gerontology programs manager, said that stereotyping and bigotry are the common denominators among ageism, sexism and racism and they all rest on the same foundation.

“We need to do more to highlight ageism and have dialogues around ageism similar to what we do with the other -isms,” Reinemann said. “It’s not so much that we need to speak about ageism and take away from all of the other isms, but we need to work together.”

In 1982, Applewhite published a series of three books titled “Truly Tasteless Jokes” under the pseudonym Blanche Knott. The books are filled with crude jokes that she said she had overheard while working at St. Martin’s Press.

In “Truly Tasteless Jokes” Applewhite splits up the jokes by which group they target. In one section, she tells jokes about age. “What’s wrinkled and smells like Ginger? Fred Astaire’s face,” she wrote.

“The books aren’t to everybody’s taste,” Applewhite said. “I certainly don’t disavow them. No one has to read them.”

She said a case could be made that they expose stereotypes.

“I’m not pretending that they’re doing something high and mighty but I’m not ashamed of them,” Applewhite said. “There is nobody who is spared in them.”

Reinemann said the college decided to choose Applewhite as this year’s distinguished speaker because Elizabeth Bergman, assistant professor and chair of the gerontology department, had been using Applewhite’s book,”This Chair Rocks: A Manifesto Against Ageism” in her classes.

“I think she’s very serious but she’s also, she can be light about it,” Reinemann said. “I have no problem with her books.”

Reinemann said it is possible that students did not make the connection between Applewhite and her pseudonym Blanche Knott. However the college’s press release for the event mentioned that Applewhite had written the Truly Tasteless joke books under her pseudonym.

For students at Ithaca College, future career opportunities may seem daunting. But surveys indicate that 97 percent of students find a job or enter graduate school within a year of graduation. Contributing writers Moira Colley and Danielle Paccione spoke to six recent alumni from each school about their experiences after graduation. Name Shannon Gimbrone ’03…