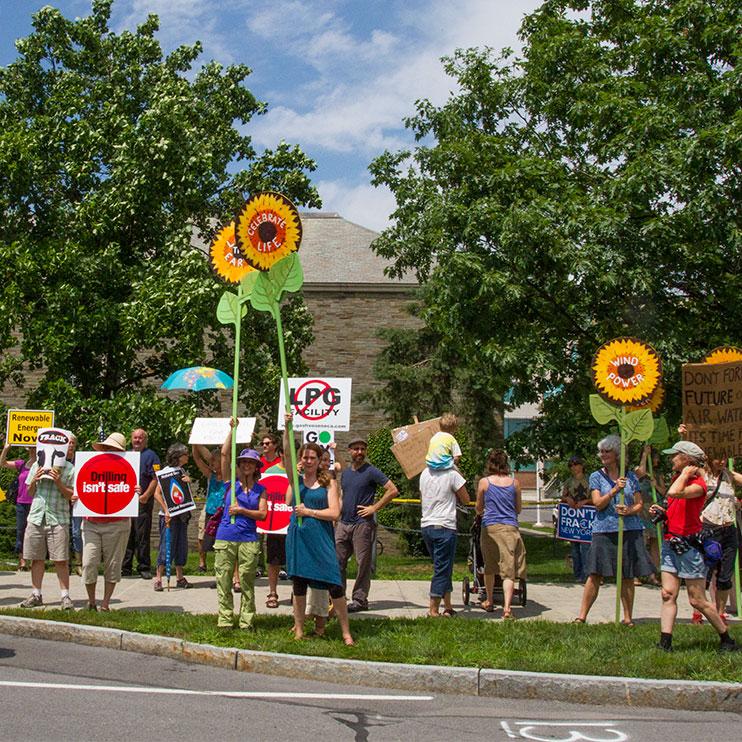 Sabrina Knight/The Ithacan
Kat Stevens, a member of Shaleshock and the Finger Lakes Action Network, speaks into a megaphone Wednesday during a protest to encourage Governor Andrew Cuomo to ban fracking in New York while he was attending a meeting in Schoellkopf Hall at Cornell University.
By Sabrina Knight — News Editor
Published: July 12, 2013

Cuomo was attending a meeting about the SUNY Tax-Free Areas to Revitalize and Transform Upstate NY, more commonly known as START-UP. The plan is a new statewide initiative to generate economic growth and make New York schools more competitive nationally by eliminating all taxes for companies who partner with a college or university.

Word of the event spread quickly. Finger Lakes Action Network, a regional anti-fracking group, created a Facebook event for the protest just before 7 p.m. on Tuesday night. By 2 p.m. on Wednesday, about 100 people began protesting against fracking with their posters, signs and noisemakers.

Jessie Braverman, a sophomore at Ithaca College who is involved with both FLAN and Shaleshock, a local group against gas drilling of Marcellus Shale, said she was impressed with the turnout of and positive response from the community to a last-minute protest.

“A lot of people are passionate about banning fracking in New York,” Braverman said. “It just really shows how powerful the resistance against fracking is in New York that in less than 24 hours so many people can come together.”

Protesters lined the sidewalks outside Schoellkopf Hall, which was under the close watch of about 10 police officers. For about two hours while the meeting proceeded inside the building, protesters chanted about banning fracking statewide, nationwide and even worldwide. Organizers made sure that protesters blocked both the front and side entrances of the building in hopes of encountering Cuomo. They were unsuccessful, as he entered through the back of the building, which was gated and guarded.

Kat Stevens, a representative of FLAN, said the community can no longer abide by the systems politicians have already set up that are causing environmental controversies like fracking. She said people from regions in Pennsylvanifa and West Virginia suffer every day from the effects of drilling and hydrofracking, so New Yorkers must do anything they can to prevent the same effects from happening here.

“For too long we have appealed to politicians who are unwilling and unable to protect us,” she said. “The worldwide theme we are seeing of profits over people has manifested here in the Marcellus Shale region. Seneca Lake is in danger. Cayuga Lake is in danger. The Southern Tier and the Finger Lakes are being placed on the chopping block.”

Stevens said that even though Ithaca already has a ban on fracking, the process is still a threat to the community because of recent plans with the Cayuga Power Plant in Lansing, N.Y. The power plant was set to be shut down, but Stevens said a group of wealthy investors is now proposing that the plant convert from producing coal-powered energy to fracked gas. She said it is important to keep the fight against fracking strong in the Ithaca area in order to halt the proposal for the conversion.

After meeting attendees settled inside Schoellkopf Hall, the protesters continued chanting and singing. They had no idea how long the meeting was going to last, but FLAN representatives and members of the community kept up their spirits with speeches of encouragement and inspiration.

As the speeches went on, many of the protesters decided not to stay; about 25 remained to greet the people exiting Schoellkopf Hall after the meeting. The protesters sarcastically thanked each person leaving the meeting for telling Cuomo to ban fracking in New York state.

Stevens targeted Mayor Svante Myrick as he left the building, asking him if he had told Cuomo to ban fracking in New York. Myrick silently smiled at Stevens before walking down the sidewalk next to the people with whom he had exited the building. Stevens followed Myrick along the sidewalk, but he walked away without a reaction.

The protesters stood on the sidewalks near the closed gates behind Schoellkopf Hall where Cuomo was supposed to exit. As they waited, protesters saw two black cars with shaded windows speed off to another exit behind the hall. Protesters said Cuomo escaped the meeting without directly facing them – citizens who are trying to voice their opinions about a cause that is important to them.

Sam Law, a member of FLAN and one of the organizers for the protest, said that no matter what Cuomo’s decision is on fracking, the people must be ready to stop it from the moment the first fracking truck drives over the border into New York.

“We need to bring pressure to Cuomo to show Cuomo that we’re not going to let fracking happen,” Law said. “No matter what, we’re going to stand resolute.”