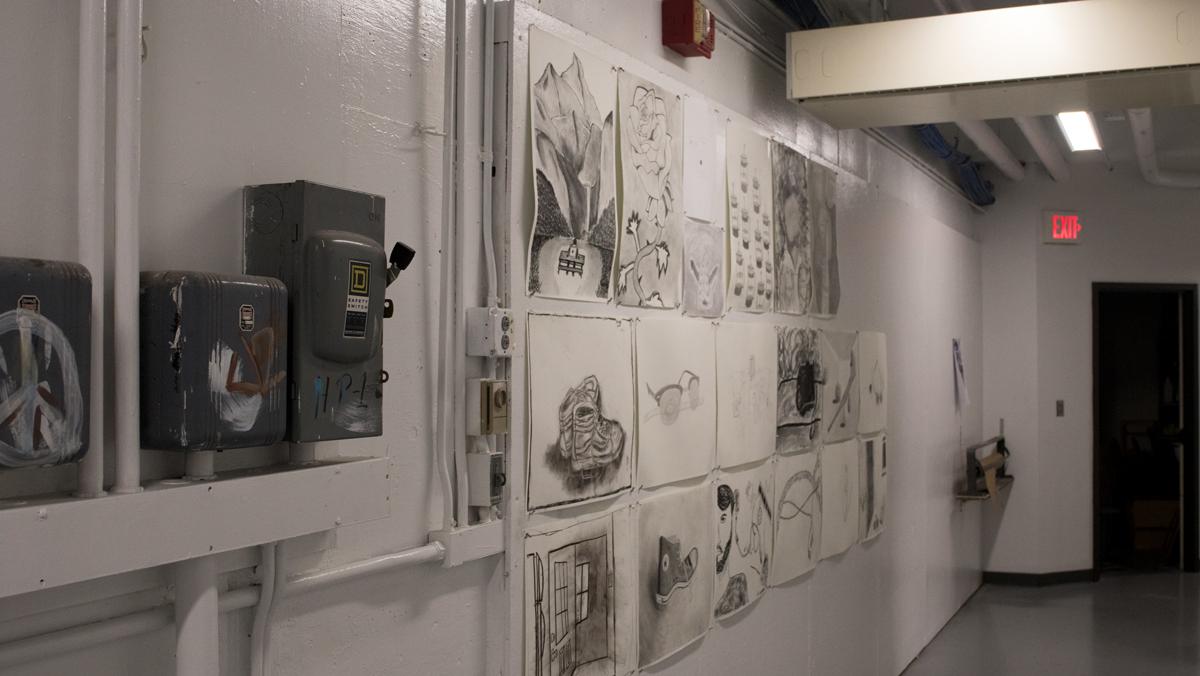 Connor Lange/The Ithacan
Students and faculty in the Department of Art have been complaining for decades that the Ceracche Center is inadequate.
By Phoebe Harms — Contributing Writer
Published: November 1, 2017

For years, faculty and students in Ithaca College’s Department of Art have voiced complaints about their facilities — the building is too small, too far from the center of campus and improperly ventilated, among several other issues. These complaints are still true discussed in the department today.

The Department of Art is located in the Ceracche Center, a building on campus beside the college’s Butterfield Stadium. The top floor of Ceracche belongs to the Athletics Department and serves as an Athletic Training Room. This leaves only half of the building for the art department. With this limited amount of space, the Department of Art runs into issues with classroom sizes — it is unable to schedule more than a dozen students into most classes. Even with these few students in each class, students still struggle to work in the small physical space of the building.

Freshman Dean Shinner said that, due to the size of the classrooms, his classes get crowded, even with a dozen people. The classrooms are filled with large equipment, like large canvases and materials for printmaking and sculpture classes. These are necessary for much of the work created. But the small space and large tools cause frequent annoyances during class.

“I rarely go a day without bumping into, hitting against or stubbing my toe on something, and I don’t think that’s uncommon,” Shinner said. “We need all the equipment in there, but I feel like things would go more smoothly if we had more space.”

Because of the small classrooms, it is very difficult for some students to get into the art classes they want, Carla Stetson, associate professor and chair of the Department of Art, said. Art majors are pre-scheduled into courses to make sure they fulfill credit requirements, which leaves little room for students who might want to take an art class out of personal interest. This has made it difficult for the art department to grow and gain financial support from the college, Stetson said.

“We don’t get a lot of support when it doesn’t appear we’re teaching as many students, but we’re unable to do anything about that because of fire codes,” Stetson said.

Vincent Wang, dean of the School of Humanities and Sciences, said he knows the placement of the Department of Art in the Ceracche Center is not ideal, but that the college tries its best to support its art students and faculty.

“I will say we do the best we can within existing parameters and supporting an art department within a liberal arts institution, rather than a professional arts conservatory,” Wang said.

Issues about the department’s lack of space stem back to at least 1972 when The Ithacan reported that students were complaining about the lack of space to complete their artwork. The Ithacan published another article in 1992 discussing similar the issues with the Ceracche Center. About 25 years later, many of the problems remain unchanged. A main issue raised in the article from 1992 was concern about the ventilation of the building, with students saying they would “leave the building lightheaded every day.” 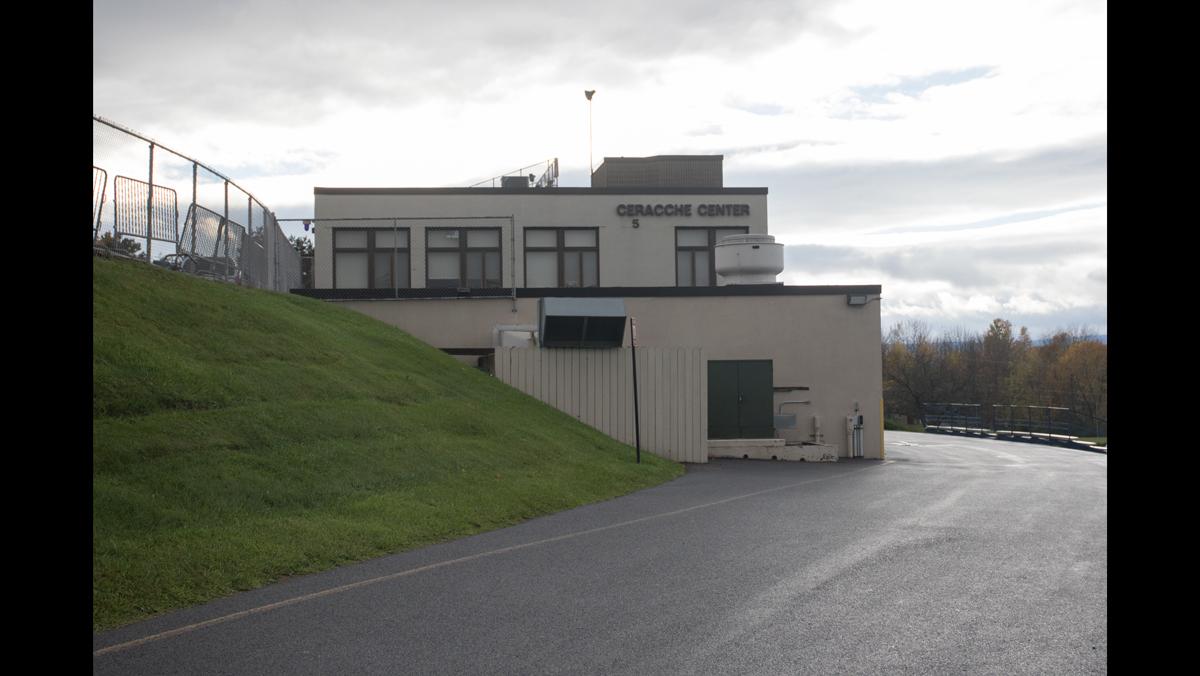 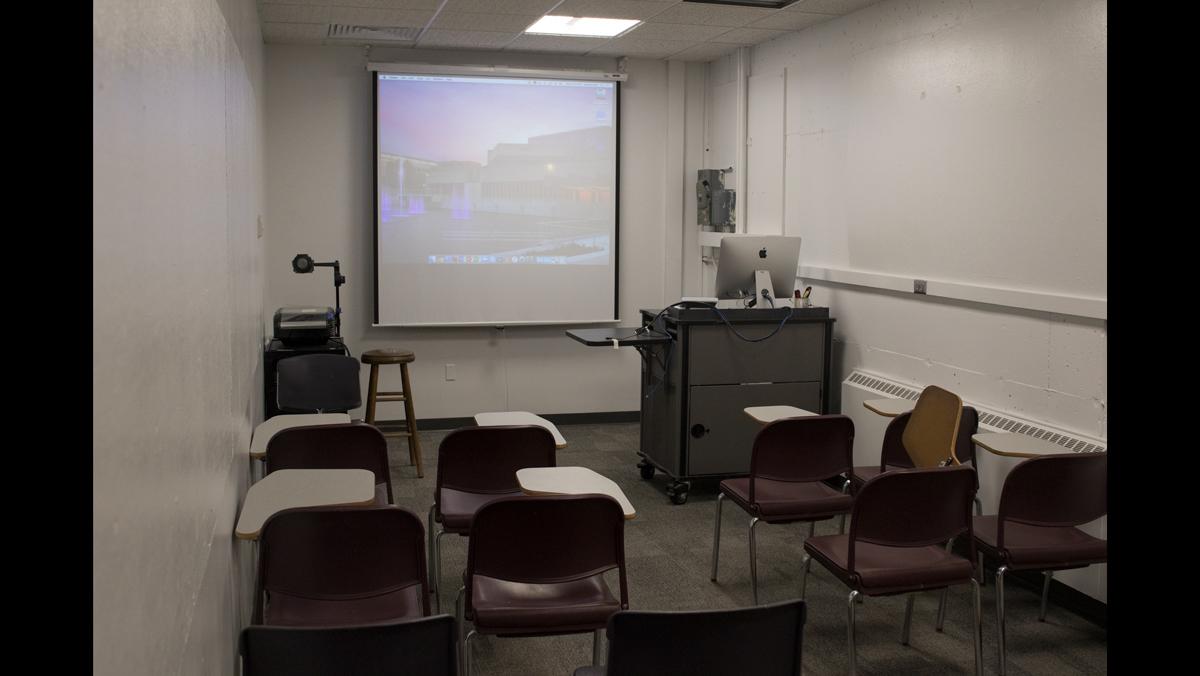 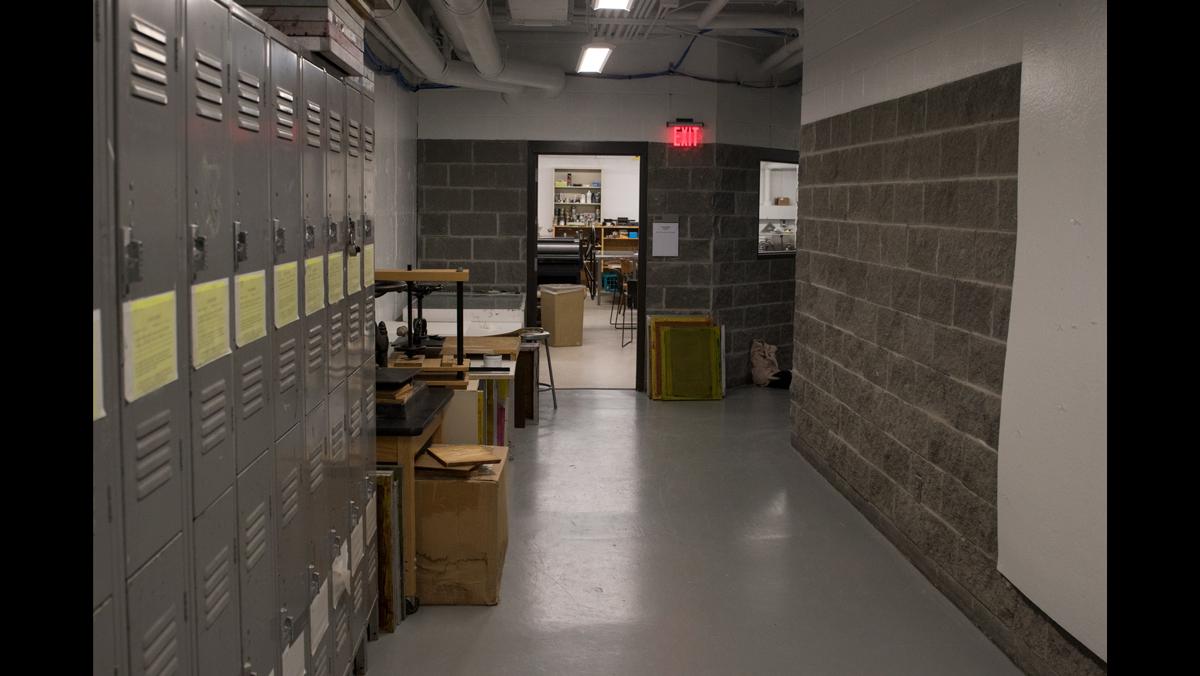 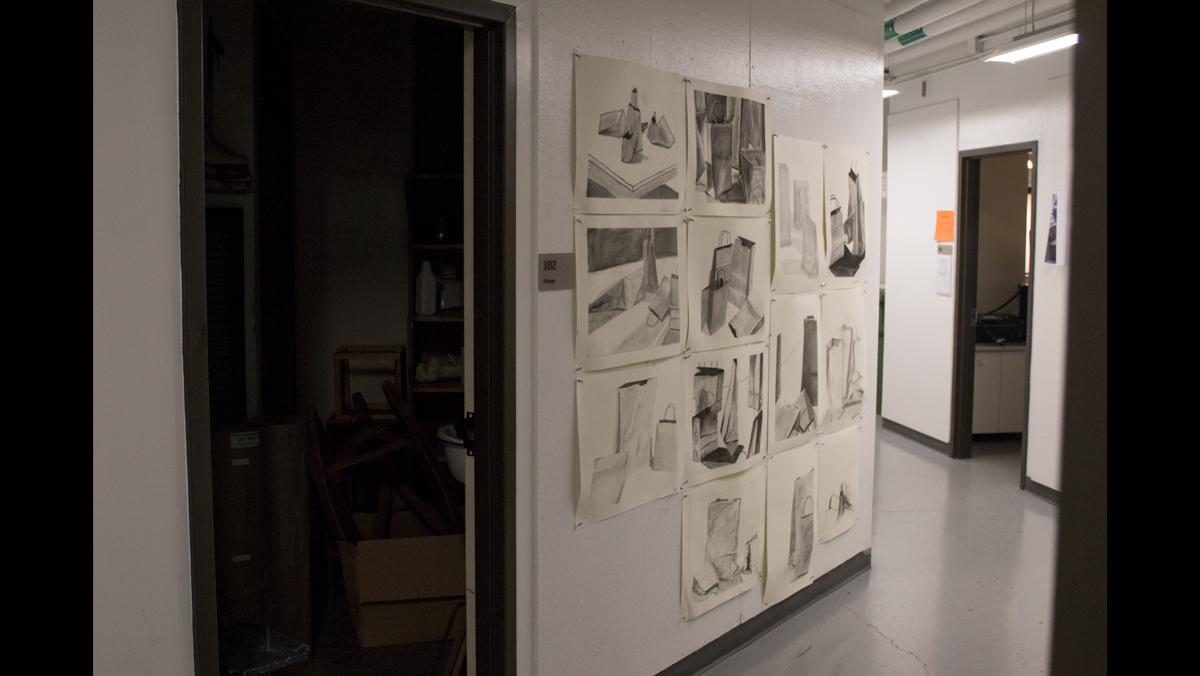 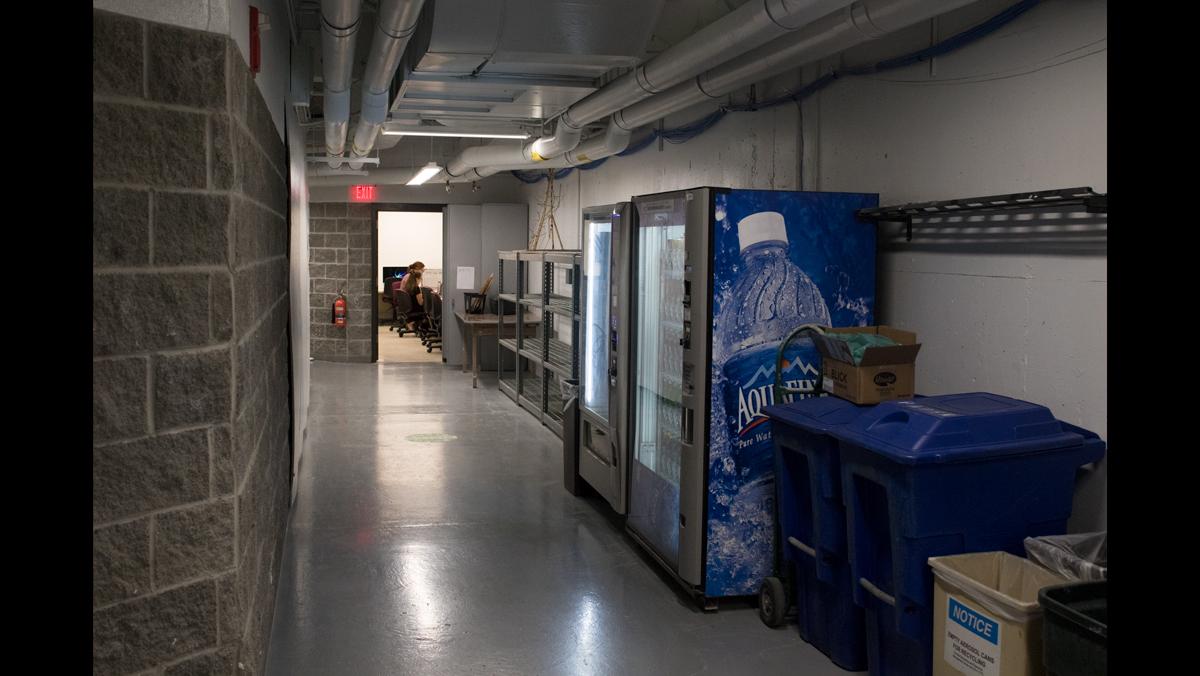 <
►
>
This is one of the classrooms used to teach art classes in the Caracche Center, the building where the Department of Art is located. For decades students and faculty have complained that classrooms are too small. CONNOR LANGE/THE ITHACAN

The college has worked to improve the Ceracche Center by renovating parts of the building this past summer, Wang said.

Stetson said the building still consistently smells of paint, and the fumes have caused discomfort among faculty and students.

Noise levels from the weight room above the art department was also a main complaint discussed in the 1992 article, but the college moved the weight room to the Athletic and Events Center in 2015. Stetson recalled that students would be frightened and jump at the sound of weights being dropped. Now, locker rooms for student-athletes and coaches’ offices exist above the department.

Included in the past summer’s renovation were additions of air conditioning to a couple of offices, repainting, better lighting, and floor and roof replacements, Tim Carey, associate vice president of the Office of Facilities, said. These changes have made the building much better, but more work needs to be done in the art department, Susan Weisend, professor in the art department, said.

“Our students pay the same tuition as other students on campus, and they don’t have an adequate facility,” she said. “We’ve had a number of renovations done, and I’m grateful, but nothing has been adequate enough. The building isn’t meant to be an art department, it’s meant to be a bus garage.”

In Fall 2017, there are seven Bachelor of Arts majors, 12 Bachelor of Fine Arts majors and 10 Art Education majors in the art department. Even with a small number of students in each major, classes are consistently full and difficult to schedule. This makes it difficult for the department to grow, Stetson said.

Carey said the college has been especially focused on enhancing the aging buildings on campus, which included improving the Ceracche Center. The building is in far better condition than before these upgrades, but these do not deal with the space issue, a problem the college does not currently have plans to address, Carey said.

“Space enhancement hasn’t been the focal point — we’re trying to get the building upgraded,” Carey said.

Facilities Services does have plans to further enhance the building, Carey said. They plan to replace windows, continue to update the boiler system and upgrade and modernize the fire alarm. He said he is unaware of any plans to move the Department of Art out of the Ceracche Center.

Another issue with the location of the art department is that few students walk past or through it in order to view the art that is displayed. Students and faculty would like to display the work created in Ceracche, but there is nowhere to broadcast their efforts, Weisend said.

Former Ithaca College President Tom Rochon tried to solve this by displaying work in the Office of the Provost, located in the Peggy Ryan Williams Center. Although work is still displayed there, it is not a popular area for students to pass through, and does not generate much of a response from other students about the artwork, Stetson said.

A creative space gallery is available for students to showcase work, but it is located off campus on the South Hill Business Campus. The space is funded by an alum of the art department. It is also utilized by students as a work space, because, unlike the Cerrache Center, it provides more room for working on bigger projects. However, since the space is in a location students rarely visit, it does not have the same effect that having a space located on campus would, Stetson said.

Both Stetson and Weisend said that they would like to have a completely new facility for the Department of Art.

“Ceracche will never be adequate unless they tear it down and put another building in its place,” Weisend said.

Wang said the college currently does not have the resources to move the art department to another building on campus, or build a new one.

“Since a decision was made to keep the art department at its current location rather than building a brand-new center … we have prioritized on improving the conditions of [the] existing structure,” Wang said.

Senior Marilyn Markech said the Handwerker Gallery is also available to display students’ art, which is located on the first floor of the library. Although this is an opportunity to display art, it is really only available for those pursuing a Bachelor of Fine Arts degree, and for a senior show at the end of every year, she said.

“It can be kind of discouraging because people aren’t recognizing you or your work until the very end of your time here,” Markech said.

She also said she wishes art students were more included in the campus community, something she said she thinks is discouraged due to the department’s location.

“It is definitely frustrating,” Markech said. “It feels as if most of the student population doesn’t know the Department of Art exists.”