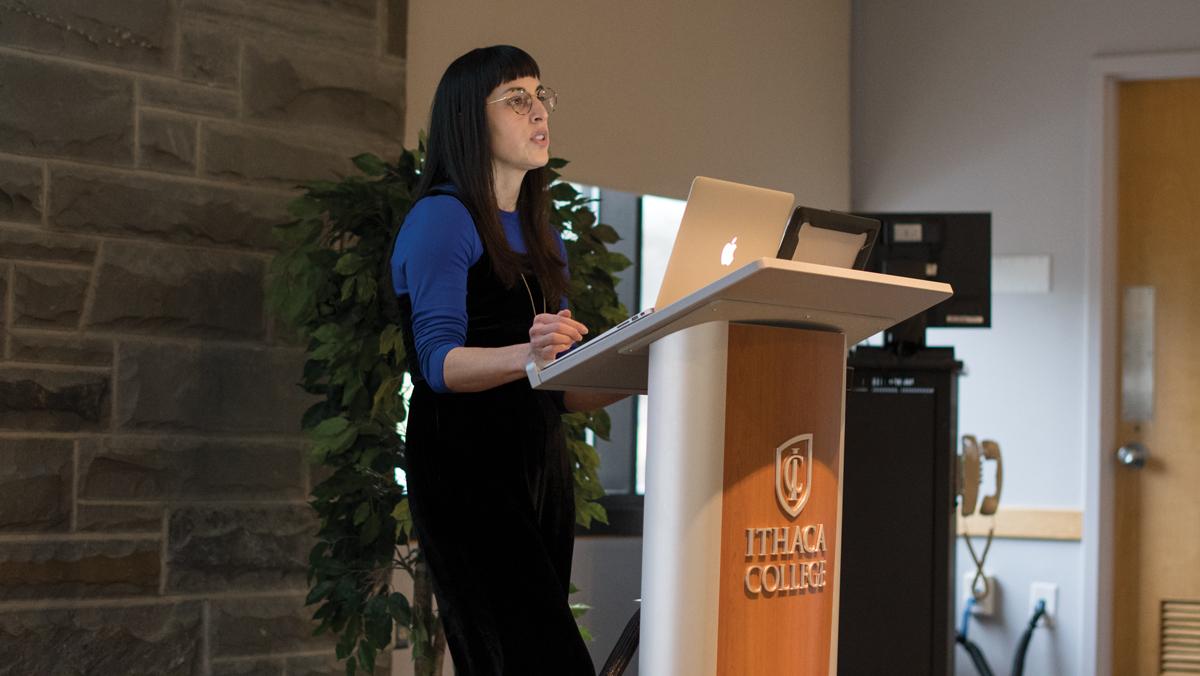 Poet, entrepreneur and philanthropist Brandi Herrera shared her experiences with Helado Rosa, a project she founded consisting of collections of hand-crafted works by Mexican artisans, on Feb. 15 in Clark Lounge.

Helado Rosa is a collaborative project created by Herrera and her partner Zachary Schomburg, a poet, novelist and illustrator who was also at the event. The project catalogs works of Mexican artisans and organizes them into collections, each collection inspired by a specific color palette. The two traveled around Mexico to search for artisans whose works they could highlight. Each collection released in the project is inspired by one of four color palettes.

The goal was to find men and women who were carrying on the traditions of their specific regions of Mexico. Herrera and Schomburg partner directly with these artisans, learn their stories and share those stories and compensate them for their craft.

Herrera said she came up with the color concept while visiting her family in Mexico. She said that on this trip, she was served a Mexican dessert called “nieve rosa,” or “pink ice cream.” The concept of the treat fascinated Herrera. An exact flavor couldn’t be pinpointed, and whenever she questioned what the flavor was, her family members replied, “It’s just pink.”

“I thought, what’s the significance of the color pink?” Herrera said. “And I kept coming back to one conclusion: Color, as it seemed, was more important than anything else.”

Herrera and Schomburg then pored over images, ideas and objects they had collected from their travels in the Southwest, Herrera said. They discovered that specific sets of images and colors evoked certain emotions and memories. They associated specific colors with particular landscapes and objects, Herrera said.

“A doorway, a glass bottle, a piece of cake,” Herrera said, clicking through a slideshow of images displaying shades of blue, green and pale pinks. “A cactus shadow, a floor tile, an earthen vessel.”

In the process of examining their collected images and ideas, the partners narrowed their associations down to four color palettes: Palma, representative of green things; Rosa, meaning pink things; Tierra, meaning earthen things; and Azul, for blue things.

Herrera then showed the audience a few of the artisans she had worked with in the past. She clicked through the slideshow to an image of a smiling man sitting barefoot in a studio, molding clay into a pot.

The image was of José Pajarito, Herrera said. Pajarito is a fourth–generation master ceramicist who has dedicated his life to a traditional form of ceramics. Every work of his is done completely by hand.

Schomburg turned to the audience to speak about Pajarito’s goals for the project.

“When we were leaving his studio, he only said one thing to us,” Schomburg said. “‘Make me famous.’”

With every sale that Helado Rosa makes, 10 percent of the profits are donated to the Mexican American Legal Defense and Educational Fund to help protect Latino civil rights, Herrera said.

“All people should be extended the same privileges, regardless of religion, race or country of origin,” Herrera said.

Freshman Casey Miller said she was inspired and empowered by Herrera’s message.

“It was a very eye-opening message,” Miller said. “I think it’s cool that she started her own business with the motive of spreading other cultures.”

Senior Rachade Williams said the event brought to light the importance of travel and understanding other cultures.

“It’s important to research and explore in a way that really connects you with the people of a culture,” Williams said. “And I think this is the perfect example of that.”