Associate vice president of ITS to retire after 39 years 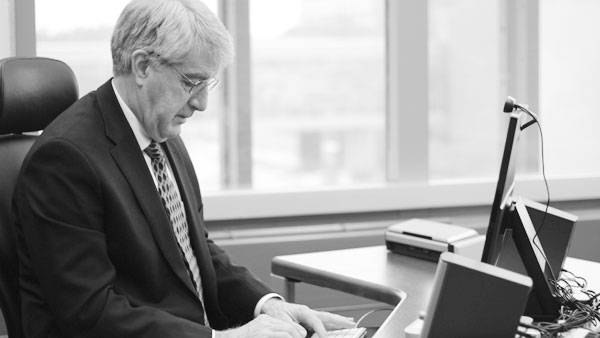 After working for 39 years at Ithaca College, Ed Fuller, associate vice president of Information Technology Services, announced Jan. 14 that he will retire Jan. 31. Fuller currently oversees ITS, which provides technology and telecommunications services, and operates the computer network and telephone system on campus.

Fuller joined the college in February 1975 as a systems programmer and was responsible for modifying the single computer on campus at the time, which was originally built for commercial environments, to suit higher education purposes.

Dave Weil, director of Enterprise Application Services at ITS, has known Fuller since the late 1980s. He said Fuller’s contributions to the college have been significant.

“When he started, there was no Internet. There was no personal computer,” Weil said. Computing at that point was the large mainframe computer that was in a data center that no one ever saw and only a few people interacted with. Today, the college has thousands of computers across the campus. He oversaw a lot of that transition and transformation of the campus.”

Fuller said not only the quantity but the size of computers changed significantly during his time at the college.

“I remember when we did an upgrade to the original computer, when they rolled the power supply into the room, it weighed nearly a ton all by itself,” he said. “This was like a prehistoric computer.”

He later took on the role of manager and director of operations and moved up to director of technical services. In 1993, he was selected to be director of Systems and Data Processing at the college, known today as ITS.

Fuller, who studied at SUNY Albany and SUNY Oswego, was one of SUNY Oswego’s earliest graduates with a degree in computer science. He said choosing a major was not easy.

“I started out as a chemistry major, morphed into mathematics, and then one of my friends told me about an elective, which was in computer science,” he said. “He thought it was kind of fun and fairly easy, so I signed up and fell in love with it. I just got hooked on technology at an early age, and I was lucky I did because it served me well over the past 40 years.”

Fuller said he remembers when the Internet was coming into being, beginning as something primarily under the purview of the U.S. government military before it made its way into higher education.

“It has been great working in a field that is so high-profile,” he said. “It has always been exciting. I tell people in this line of work that if you don’t like what you are doing, wait a minute because there will almost certainly be something new.”

Fuller said ITS offices had in the past been scattered across campus, including Rothschild Place and Terrace 13, before they were united in Job Hall in 2010. However, ITS will once again be relocated in August when some offices will move to the 14th floor of East Tower, which currently houses the TC Lounge.

“The powers that be [at the time], knowing that we had been scattered … strove to bring us all back together and built us a nice setup down on the first floor, centrally located, convenient,” he said. “We are going to get spread out a bit [again], but I can understand that this building is prime campus real estate for academic programs. It is what it is.”

Fuller’s four-decade tenure at the college has not been without controversy, as ITS has been struggling with complaints of poor Wi-Fi connectivity across campus.

Speaking to The Ithacan in October, Fuller said his department was not equipped to handle the recent proliferation of Internet-capable wireless devices.

“For whatever reason, it took us by surprise,” Fuller said in October. “It’s what it is, but we’re making it a top priority in ITS to get [Wi-Fi incompatibility] remediated.”

“Technology has become a lot like electricity,” he said. “People just expect it to be there … I don’t think a lot of people appreciate the complexities of making it available to people and the cost of doing so. Ed does and is very good about keeping current on what is happening in the whole technology field.”

Fuller said there are currently projects on campus he would like to see through completion, but the time has come for him to retire.

“I will be retired, but I won’t be disconnected from the place,” he said.

The college will hold a reception to celebrate Fuller’s career from 2–4 p.m. Jan. 29 in Klingenstein Lounge in the Campus Center.